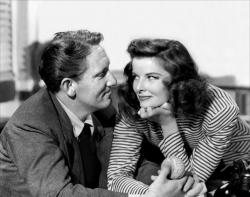 Woman of the Year is the first teaming of Spencer Tracy and Katharine Hepburn. It established their screen personas; Tracy, the patient ordinary man with conservative leanings and Hepburn, the intellectual, feminist liberal. They argue in all of their movies but always love each other dearly. They would go on to play variations of these roles for 8 more films until 1967's Guess Who's Coming to Dinner.

In Woman of the Year, Tracy is a sports writer for the same news service where Hepburn is a political journalist. They fall in love but it is made very clear early on that they are complete opposites. He takes her to a daytime baseball game that she does not at all understand. "Are all these people unemployed?" She asks Tracy as they enter the stadium. Later, Tracy attends a party at Hepburn's apartment. Everyone is foreign to which Hepburn can speak to but Tracy cannot. Tracy makes fun of a turban wearing man that would never make it onto the screen in these politically correct times.

Even with their apparent differences they get married. On their honeymoon they get interrupted by Hepburn's friend who has just gotten off a ship from Nazi occupied Europe. To make a point, Tracy invites his friends over. They eventually consummate their marriage.

Hepburn plays a feminist in obvious and subtle ways here. She gives a speech at an awards banquet for a fellow feminist. Tracy accidentally walks in and is completely uncomfortable. Even more, is that Hepburn and Tracy exchange sex roles in several scenes. Before they get married, Hepburn makes it obvious that she is willing to have sex with Tracy but it is he who says no. In another scene, Tracy is wearing a new hat and wants a compliment from Hepburn about it, but she is to busy working. In that same scene she is wearing pants and a suit jacket that is very man-ish. When they get married he has a woman as his best man and later in the movie she was hoping he could be her bridesmaid.

The movie has some funny moments that time has partially diminished. Near the end, Hepburn is trying to prove to Tracy that she can be a regular wife but ends up making a disaster of the kitchen. The routine has been done on so many sitcoms that it seems like a tired scene. However, it is funny to watch the upper crust Hepburn slowly come unglued.

Although this is a team up movie by two great stars, this is Hepburn's movie. She has great dramatic scenes, such as when she has just won the Woman of the Year award but then finds that she is anything but at the orphanage. She has the kitchen scene as well as the baseball scene to demonstrate her comedic talents. She even speaks more foreign languages here than Meryl Streep. It is her character that does the changing when she learns the lesson that, "Success is no fun unless you share it with someone." 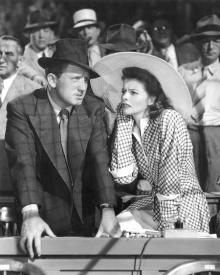 I agree that this is Hepburn's movie. It was her idea to work with Spencer Tracy. She even chose a director (George Stevens) she knew Tracy was comfortable with instead of going with her old friend and frequent collaborator George Cukor. This first team-up of these two legendary stars is one of their very best. To me this film marks the start of the second phase of Hepburn's career. In the two years between The Philadelphia Story and this movie she went from being a young actress to a middle-aged one. Don't get me wrong, she remained stunningly gorgeous for years afterward, but there is something about her screen persona that noticeably matured during those two years.

Woman of the Year is a delight from start to finish. Hepburn's polyglot journalist Tess Harding (she is shown speaking English, French, Spanish, Russian, German and Greek) is one of her most memorable characters. If she changes a bit too drastically at the end that's because the producer and director both wanted Tess Harding to get her comeuppance. Plus the original ending didn't test well with audiences so the rather silly scene where Hepburn tries to cook breakfast for Tracy was added. As Eric said, it is quite funny and has been copied many times in other movies and on television sitcoms. The sight of the glamorous Hepburn attempting to make toast, coffee and waffles while wearing a mink coat is worth a chuckle or two, although it seems a bit odd that this incredibly intelligent and sophisticated woman cannot perform even the simplest of domestic chores.

Even though Hepburn and Tracy met for the first time shortly before filming began they seem incredibly comfortable around each other. As in all of their movies together they seem more like old friends than romantic lovers. Notice the way they embrace at the end. They hug but do not kiss at the fade-out. Still they were an undeniably powerful movie team. They quibble and bicker like an old married couple and each handled drama and humor with equal aplomb. For 25 years and 9 movies they were one of Hollywood's greatest screen pairs. If you've never watched it before, check out Woman of the Year and see where it all began.