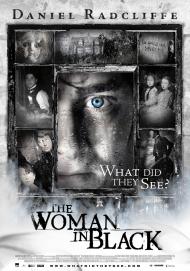 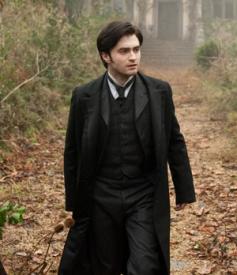 Daniel Radcliffe in The Woman in Black.

The Woman in Black is a creepy, old fashioned ghost story of the kind Hollywood rarely makes anymore. Instead of sexy teens getting slashed to death in a gorefest, we have a widower in Edwardian England dealing with a haunted house. There's not much blood or action, but plenty of atmosphere and well filmed chills.

A grown-up Daniel Radcliffe, who appears to be playing a few years older than his actual age of 22, stars as Arthur Kipps, a Lawyer and widower, whose wife died in childbirth four years previously and from which he has yet to emotionally recover. His firm sends him to Eel Marsh House in a remote corner of England to deal with the papers of a dead woman. When he arrives in the village he finds the villagers unfriendly as they caution him against visiting the house. When Kipps goes to the remote old mansion, accessible only during low tide, he finds a decrepit and spooky old house filled with creaks, visions and sightings that soon make Kipps a believer, but how will he deal with this ghost who seems to be causing the death of children in the village?

Director Watkins does a great job measuring out the scares and creepiness. It begins with a feeling of oppressive apprehension and it only grows from there. Good use is made of reflections, shadows and noises to create the scares and keep you gripping the arm rests. Some of the best scares are created by reveals where Kipps will step back or turn around and we see something that was hidden just moments before.

Radcliffe plays it seriously and straight. After seeing him as Harry Potter for so long, I wasn't sure how I would take seeing him in a grown-up role, but I found that I had no problem at all. Maybe those trademark Harry Potter glasses will work to his advantage when playing other parts. We're so used to seeing him wear them, that just taking them off makes us think of him differently. Beyond that though, he does a good job and will, it appears, continue his acting career beyond the Potter franchise. He's already proven that he can do song and dance after a successful Broadway run in How to Succeed in Business without Really Trying.

And it's important that Radcliffe do well in this part because it's mostly a one man show. Ciaran Hinds and Janet McTeer are the only other names in the cast, but their parts are small. Most of the film is just Radcliffe alone in the haunted house with the ghosts and so he must carry the film squarely on his shoulders, something he does quite easily.

I do have one small complaint and it's a common one regarding haunted house stories. After his initial encounters with the ghosts in the house, Kipps returns to it, even deciding to spend the night there. We've seen this before where people stick around a house that is clearly haunted by malevolent spirits. Personally, the first time I saw that creepy lady in black, I'd have been on the first train for London. They try to explain it by saying that if Kipps doesn't complete this job he could get fired, but I think I'd take my chances in the unemployment line.

I'll confess I was a bit disappointed with the ending. I won't spoil it, except to say I was hoping for a different one. It's completely in keeping with the mood and theme of all that comes before it, but it's not the outcome I wanted. You'll have to see it to know what I mean.

Sure, it feels a little old fashioned, but The Woman in Black actually makes that work to its advantage. Fans of creepy ghost stories should find plenty to enjoy with this one. I know I did. 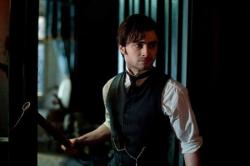 Daniel Radcliffe in The Woman in Black

I nearly laughed out loud when I read in Scott's review that,the "...remote old mansion, accessible only during low tide,..."  Seriously?  What an amazingly cheesy way of keeping Kipps alone on the haunted island.   It took a bigger stretch of my imagination to accept that, than it did the existence of a vindictive spirit.

With that said, I enjoyed The Woman in Black.  It is my kind of horror film.  Gore and blood do little for me, but a good fright is worth it's weight in ticket sales.  I had goose bumps several times while watching this.  I cannot remember the last time that happened.  I do not want to give details of the scary scenes as that would lesson their affect.

The old mansion full of shadows, and a history of former occupants provides an ideal setting for unlimited hauntings.  Add the grounds containing a decent sized grave yard, and you have the perfect setting for a ghost story.  If only the over-the-top causeway idea was left out.

This is only James Watkins second film as director.  He proves to have a definite affinity for tense moods and atmosphere.  I look forward to his other work.

The film's conclusion was not what I was expecting either.  I had the story going in one of two directions.  Neither of which were correct.  You could make arguments for the unique ending being a happy or a sad one.   I prefer a less conflicting resolution.

Daniel Radcliffe and the woman in black in The Woman in Black.

The causeway that gets submerged at high tide didn't bother me. In fact I rather liked it. It added an original twist to the classic haunted mansion setting. And it's not like the house was really inaccessible. Surely someone in the village owned a boat. At any rate it made for several visually interesting shots in a movie featuring some very nice cinematography. The original music score composed by Marco Beltrami adds to the movie's consistently eerie atmosphere.

I did get a chuckle from one scene in particular. Early on in the movie Harry Potter takes a train from London to Hogwarts - oops - I mean Daniel Radcliffe as Arthur Kipps takes a train to the Eel Marsh House. Just like in all the Potter movies Arthur makes a friend on the train. Although to be fair, as Scott said, this movie is actually a big departure from his most famous role for the young actor. And he is quite good in it, carrying several scenes all alone without any dialogue.

Like Eric, I got the creeps more than once. I felt the hairs on the back of my neck stand up watching Arthur explore the haunted manor. This is a classic ghost story and the director does a great job of setting up shots to provide scares. The music boxes, dolls and mechanical toys were actual antiques from the period and they contribute to the pervading sense of Gothic gloomy decay in the scenes at Eel Marsh House. Although I concur with Scott that had I been in Arthur's place I would have run screaming from the haunted house the first time I saw that rocking chair moving by itself and, if necessary, swum across to the village.

The ending is a bit polarizing but I agree it perfectly suits the story. It's bittersweet in the sense that, as Eric wrote, it can be viewed as either a happy or a sad outcome. The Woman in Black received mostly favorable reviews and made enough money for Hammer Films that apparently a sequel is in the works in which the Eel Marsh House is converted into a military mental hospital during WWII.  I'm getting chills just thinking about it.