Hugh Jackman is The Wolverine.

7 years and 2 X-Men prequels later, the franchise finally returns to the storyline after 2006's Last Stand, where Wolverine killed the evil Dark Phoenix/Jean Grey. The X-Men have disbanded and several years have passed. Wolverine has retreated to the remote Canadian wilderness to lick his emotional wounds. When the story begins a grizzled and unkempt Logan is plagued with nightmares of Jean and of his experience at Nagasaki in Japan when the atomic bomb was dropped on the city to end WWII.

Logan saved the life of a Japanese soldier that day. History catches up to him with the arrival of a young woman sent by this same man. Now old and dying and wishing to say goodbye to the man who saved his life so many years ago. Reluctantly Logan agrees to travel to Tokyo, where -of course- he finds a far different situation than he was led to believe.

What follows is a fairly interesting mix of intrigue, romance, drama and action. With the balance of action being less than you would expect in your average superhero movie. But then The Wolverine isn't your average superhero movie. You'll notice they dropped the X-Men from the title. That's because this isn't really an X-Men movie at all. Instead it is Logan's personal journey back to life from a very dark place.

Once again Hugh Jackman is terrific as Logan/Wolverine. But then this is the sixth time he's played this role in a movie and it should seem like second nature to him by now. He gets to stretch a bit more than usual and physically he's even more ripped than ever (see photo). This Logan shows more emotion than just his usual anger. He also gets to demonstrate his tender side by romancing Mariko, the granddaughter of the man whose life he saved. And for once he's vulnerable when his healing powers are compromised by Viper.

There are a couple of exciting action sequences and several cool new characters get introduced. Rila Fukushima is great as Yukio. She may not look dangerous but she can kick some serious butt. She appoints herself Logan's bodyguard and saves his life more than once. Svetlana Khodchenkova plays the aforementioned Viper. She's a mutant-villain with a snake-like tongue and an immunity to toxins. Poison is her preferred weapon. Another interesting new character is Harada the bodyguard/ex-lover of Mariko. He is an expert with bow & arrows and he's a bit morally ambiguous as he plays both sides of the fence. He genuinely tries to protect Mariko but he is also in cahoots with Viper.

Unlike most of today's superhero movies The Wolverine doesn't overdo the CGI. As a result the action and violence are less cartoonish than what you find in most summer blockbusters. The ending may not be original or surprising but at least it never goes pointlessly over-the-top. For a person like myself, who isn't normally a huge fan of the genre, I was entertained by The Wolverine. 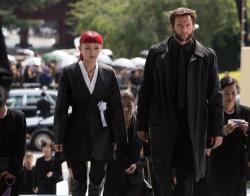 Rila Fukushima and Hugh Jackman in The Wolverine.

In the glut of superhero movies that Hollywood is pouring into theaters these days, The Wolverine stands out for several refreshing reasons. As Patrick wrote, it doesn't overdo the CGI. It uses its special effects to aid the story and never allows them to get in the way of the character.Perhaps the most refreshing aspect of the film is that the plot doesn't involve a world threatening villain. It's a much more intimate story and for that reason and others, this is my favorite superhero movie of the year.

Hugh Jackman was born to play Wolverine. It's a part that suits him perfectly. As Patrick said, he's played it six times, which is actually a record for a single actor and a costumed superhero character, even though Jackman never actually dons a superhero costume in the entire film. He brings heart and a believable toughness to the role. It's not an incredibly deep character, but compared to the average superhero movie it is.

Despite the human drama, there's still plenty of action. The most exciting and fun scene takes place on the roof of a bullet train where Wolverine does battle with several henchmen as it zooms across Japan. Wolverine clings on with his claws while the henchmen must dig in with knives. As with the previous movies featuring Wolverine, even though he wields his claws with abandon, there is almost a complete absence of blood. It doesn't hurt the action, but with all the blades flashing around, it is noticeable.

I agree with Patrick that Rila Fukushima is terrific as Yukio. She's a scene-stealer as the feisty young mutant with the ability to see how someone will die. Although it's Mariko that Logan romances, his camaraderie with Yukio is where the real chemistry lies.

I've always thought that Jackman would make a good James Bond and in many ways that's what this movie feels like. Jackman goes to a foreign location and gets involved with a conspiracy lead by an evil genius. He gets to dress sharply (once he cleans up), deal with a good girl and a bad one, and of course the finale takes place inside the villain's headquarters. There's even a line of dialogue in this film that's straight out of Diamonds are Forever. When Logan throws someone off a balcony, Yukio asks him how he knew there was a pool down there, to which Logan replies that he didn't. A similar line of dialogue takes place in that Sean Connery Bond film.

Jackman has said in interviews that he still enjoys playing this part. So long as he keeps playing him, I'll happily keep watching him do it. 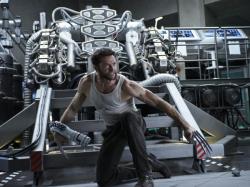 Hugh Jackman as The Wolverine

Although both my brothers called this film a superhero movie and it is marketed in that genre, I argue that Wolverine is in fact not a superhero, at least not in the traditional sense. As Scott mentioned, he does not wear a costume. In all the films he has appeared, he has rarely put one on and when he has it is not the yellow one he famously wears in the comic books.

Even more important than his look is his attitude toward justice. Batman, Daredevil and Spiderman are protectors of their cities. Superman is protector of Earth. Green Lantern is the protector of his sector. Cyclops and Storm are protectors of their school and other mutants. Logan has no such sense of duty. He wants no part of such heroics. It was Rogue who drew him into the role of hero in the first X-Men film. Here it is Yukio who drags him from his self-imposed isolation.

Logan is the anti-superhero. He does not seek fame like Iron Man. He does not have any compulsion to help others like Professor X or for that matter Magneto. He wants to be left alone like some wandering cowboy in an old Clint Eastwood western. He will do you no harm until you piss him off.

With that in mind I felt the opening scene of him starting a fight with the bear hunters to be poorly written. So they killed the bear with poison, which he tells one of them is illegal. What did he really hope to gain by going into the crowded bar and assaulting him because of it? Stabbing him in the hand with the poison arrow is likewise illegal and could be easily construed in a court of law as an attempt to murder him. The bear killed some of the hunters. Was the surviving bear hunter really deserving of Logan’s hissy fit? Of all the wrongs in this world that Logan could right, some hunters not following the rules barely registers on the important scale. After all, some of them already paid the ultimate price.

If that were not enough, Yukio helps Logan out in the bar fight. So here you have a man who cannot be hurt with built in daggers and a martial arts expert using an ancient sword fighting a crowd of drunks. Yeah, hardly a fair fight, especially when you consider that Logan started it.

Although it begins with that weak opening scene, it gets better when he arrives in Tokyo where Logan becomes involved with three generations of a family going through a power struggle. He becomes emotionally attached to the delicate Mariko and acts as her self-appointed body guard. She pays him in meals and sexual affection. It is played much more romantic than that but I never truly felt they had a real emotional connection. Even when lying in bed with Mariko, post coitus, Logan still dreams of Jean Grey, which does not say much for Mariko.

I agree with Patrick that Yukio is a “cool” new character and with Scott that Yukio makes a more fitting companion for Logan than Mariko. Logan’s life is far too dangerous to have to play body guard all the time. He needs a Jean Grey or Yukio by his side, someone who can take care of themself or even help Wolverine out in a fight.

Also agreeing with my brothers, I liked that this film was more intimate and relied less on computer graphics to tell a story.  Like Batman, Wolverine is best alone, fighting his demons as well as some insane villain. Both of these guys should leave the earth saving battles to other superheroes so equipped for such things. With that said, the twist ending is announced early on when the fortune telling Yukio tells Wolverine that she did not foresee her adoptive grandfather’s death.

Although the story plays on a uniquely smaller scale than most super hero films, the writing still fails with some usual super hero movie trappings. Like the Man of Steel, Wolverine is nearly impossible to kill. His healing power is almost equivalent to Superman’s invulnerability. This creates a dilemma for the writers. How do they put tension in a film where the hero is never truly threatened? They have two options. The first is to put someone the hero cares for in harm’s way.  Can anyone on this planet count how many times Superman has had to save Lois Lane? The other is to take away the hero in questions power.

Although he briefly loses his powers when aboard Zod’s ship, this year’s Man of Steel thankfully did not contain any use of Kryptonite. Here, Wolverine loses his powers at the hands of Viper. Although the scene where Wolverine gets his full powers back is a good one, I still think it is lazy on the writers part to reduce the heroes powers in order to create tension in the script.

The worst offense in this entire film lies in the climactic battle when Wolverine fights a huge armored man whose suit is made entirely of adamantium. This extremely rare metal suddenly seems less rare. If this man can make an entire suit of it, why has Tony Stark not collected enough to make himself an invulnerable Iron Man? Again, this is lazy writing.

Although aspects of this film really bothered me, I still enjoyed the change of pace it brought to the X-Men films. Wolverine is not your conventional superhero and Logan’s story is refreshingly unique to the genre. When he was younger he fought in wars. He has since grown tired of killing, but deadly circumstances keep finding him no matter where he hides. Logan is a lonely killing machine with a heart yearning for love. He is a reluctant hero, but a hero none-the-less.