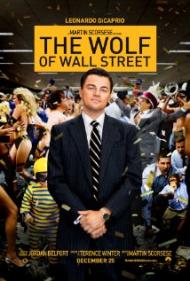 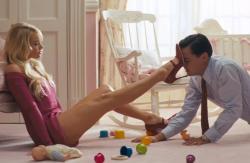 Margot Robbie and Leonardo DiCaprio in The Wolf of Wall Street.

The Wolf of Wall Street is a tale of excess told excessively. After three hours of watching Leonardo DiCaprio overdose on drugs, booze, sex and money, you will feel as though you've been on a binge yourself. There's an enjoyable movie buried in there somewhere if you could trim off about an hour of self-indulgence.

Based on a true story, DiCaprio plays Jordan Belfort, a slimy, crooked stockbroker from the late 1980s into the 1990s. The film covers his rise and fall as he is brought low by his own hubris, greed, stupidity and addictions. He begins as a naive, sincere young man caught up in the excitement of Wall Street, who unfortunately gets his broker's license on October 19th, 1987 the day that would come to be known as Black Monday, when the stock market took its biggest nose dive since the Great Depression, and his firm goes bankrupt. He ends up taking a job selling unregulated penny stocks for a small company on Long Island, but instead of being the step-down he thinks it will be, it ends up being the making of him. Instead of the 10% commission he would earn on Wall Street, he can charge 50% commission on transactions he brokers. Before long he's operating his own firm and earning millions. From these legal, but immoral sales, he moves on to bigger and bolder schemes, each own more illegal and more profitable than the last until finally his activities come to the attention of the FBI and leads to his inevitable downfall.

The film originally had a release date back in November, but the MPAA wouldn't give the film an R rating without further cuts. Director Martin Scorsese went back into the editing room to make further cuts and eventually got his R, although it's definitely a hard R. Within the first 5 minutes of the film there's a scene with Leonardo DiCaprio blowing coke up a nude whore's ass and further scenes of sex and nudity are never more than 5 minutes away. There's plenty of shots of breasts, asses, full frontal nudity, and even a glimpse of Jonah Hill's erect penis, to go around. Not only does it look like Belfort and his cronies are having fun in the film, but it appears that DiCaprio and Scorsese had fun making it. Also contributing to the R rating is the language. There's reportedly over 500 uses of the word fuck in the film, which sets a new record.

There have been accusations against the film that have blamed it for glamorizing Jordan's drug fueled lifestyle. Both Scorsese and DiCaprio have denied this saying that the whole point of the film is to show the consequences of this lifestyle. I understand their point, but for the first hour and a half of the film we watch a young man and his cronies having a hell of time, enjoying all the sex, drugs, cars, houses, boats and travel that money can buy. Yes, it's vulgar and selfish, but it seems to be doing its best to show how these guys were living like rock stars. Perhaps if this section of the film had been edited down to half the time it wouldn't have seemed quite so excessive. We are also never shown the victims of Belfort's schemes, so we don't see the consequences of his actions on others. His customers are dismissed as being just as greedy as he is, only stupider.

The other problem with the film's length is that three hours is a long time to spend with such detestable people. Everything that happens to Belfort is his own fault and is mostly due to his drug addiction. He has everything you could materially want including a house, cars and a yacht. He has money stashed away in Switzerland. He has a gorgeous wife (played by the incredibly sexy Margot Robbie) with whom he has two children and he throws it all away because of his own stupidity. He's even given the chance to make a deal with the SEC and escape mostly unscathed, but refuses. Having a main character you'd basically like to slap for three hours isn't a good thing.

Given its nature, the film works best as an over the top comedy. There are some very funny scenes, particularly in the beginning of the film. Belfort and his cronies are easier to stand when you're laughing with or at them.

DiCaprio is only okay as the lead. He plays slimy well, but lacks the smoothness to really make you believe he's the world's best salesman. He always seems uptight about something. Jonah Hill fares less well. Apparently his Oscar nomination has left him with the impression that he's a genuine actor. Matthew McConaughey, still looking AIDS thin from his role in Dallas Buyers Club, has a scene stealing cameo as one of Belfort's first bosses. It would have been interesting to see what he could have done with the lead role. His new found acting skills and easy going charm might have been able to do wonders with the part. Rob Reiner also manages to steal a few scenes as Belfort's short-tempered father.

Maybe a two hour cut of this film would have produced something great. As it stands though, there's just too much of not good enough to go around.

Jonah Hill and Leonardo DiCaprio in The Wolf of Wall Street.

I enjoyed this movie even less than my brother did. The Wolf of Wall Street is as excessive and self-indulgent as the characters it portrays. The only thing I disagree with him about is the acting. I thought both DiCaprio and Hill were decent (although not Oscar worthy). In roles that call for excess in everything they both deliver the goods. There's nothing subtle about their performances but then the movie doesn't call for subtlety. DiCaprio is especially good during Jordan's drugged-out moments (of which there are plenty) and Hill manages to evoke a real character and not just his usual onscreen persona.

The Wolf of Wall Street absolutely glorifies drug use, prostitution, and vulgar materialism. As Scott pointed out the script seems to condone the actions of these idiots. It reflects the attitudes of its characters much more than it condemns them. It seems to be saying that everyone would really love to behave this way if only they could get away with it, and that the only fault of Jordan Belfort's was getting caught. He spent only a few years in prison where his money allowed him special treatment, and he is now making tons of money on the lecture circuit. Scorsese and DiCaprio are both full of shit if they think the point of this movie is to show the negative consequences of Jordan Belfort's lifestyle.

I also found it to be quite sexist. These actresses are asked to disrobe in many scenes and there is plenty of full-frontal female nudity – even Robbie, the female star of the picture, is required to bare all for the camera (she reportedly downed three shots of tequila before Scorsese called action). The male stars are never required to do so. Sure we see DiCaprio's naked ass but the camera angle is strategically placed so that we never get a glimpse of his package. And don't tell me it's because of the rating system, Richard Gere did full frontal nudity more than thirty years ago in American Gigolo and got away with an R rating. As for Jonah Hill, he was outfitted with a prosthetic penis for his scene at the party where he masturbates in front of a room full of people. Not that I have any desire to see his junk but it does beg the question, “Why the double standard Marty?”

The level of humor in this movie is extremely crass and juvenile. If you find it hilarious to listen to an entire conversation based on fucking your first cousin, and/or Little People being discussed as subhuman creatures meant to be abused for others' amusement, then this movie is for you. The problem is I never got the feeling that the script was making fun of these guys, which would have made it more palatable. If we were laughing at what insensitive, idiotic jerks they were I would have found it amusing, but the script seems to think these jokes are funny in and of themselves.

I don't think there has ever been a year where I have been in such disagreement with the Academy. I detested Her, thought American Hustle was seriously overrated, and now comes this overly long, self-indulgent Scorsese picture that somehow scored five Oscar nominations. At one point Belfort references Wall Street's Gordon Gekko. The difference is that Oliver Stone saw Gekko as a villain, while Scorsese has made a hero of Jordan Belfort. 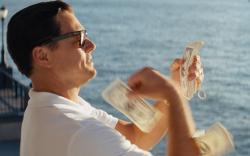 Leonardo DiCaprio in The Wolf of Wall Street

With The Wolf of Wall Street, Martin Scorsese set out to vilify stock brokers and Wall Street in general. The scene with Matthew McConaughey telling DiCaprio how being a stockbroker works is a negative testimony and a filmed indictment of investment brokers. I do not know how much money Scorsese lost in the market but this movie is clearly a vindictive act.

Every investment broker is shown wanting to make money, which in and of itself is not wrong or even a character flaw but that is only a small part of the story. These Wall Street gangsters do a ridiculous amount of illegal drugs. They are not loyal to their spouses, having frequent sex with prostitutes and often in public places. They break all kinds of laws.

DiCaprio and company are playing a group of unlikable criminals. As Scott wrote, it is not much fun to spend time with them. Compare these folks to the Corleone family who had people killed all the time and broke countless laws as well. The biggest difference being that the Corleone’s were people that everyone could relate to and even like.

Scorsese does not want us to like these brokers and works over time making sure that happens. He never throws the characters a sympathetic bone. Many of us lost money in the market, whether it was through direct investments or our 401K. He shows us, the victims, how these greedy sons-of-bitches partied on the dollars that we lost. They played their fiddles while our portfolios burned.

I side more with Patrick on the acting. I think DiCaprio and Hill do good work, but not great. Matthew McConaughey is far more charming than DiCaprio and I agree with Scott that McConaughey could have pulled of the lead role with more panache. DiCaprio can act charming while it comes more natural to McConaughey.

After three hours of drugs, sex and nudity I realized that Scorsese is just as manipulative as an investment broker. They tell their clients what they want to hear to make money, giving them flowery speeches, while Scorsese decorates this film with lots of hot naked ass and swearing. Brokers blind their targets with thoughts of making big money that may never happen, while Scorsese distracts us with a famous cast, production and a supposed moral lesson when it is actually nothing more than just a frat boy fantasy. This film is as hollow as a broker's promise.