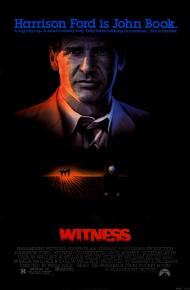 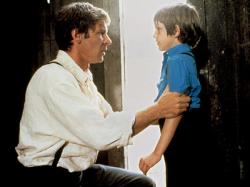 Witness was made at the very peak of Harrison Ford's popularity. He had just starred in Indiana Jones and the Temple of Doom the previous year and Star Wars: Episode VI-Return of the Jedi the year before that. With Witness, he was obviously looking for a change of pace from the big and loud, in your face, action genre.

Ford plays a Philadelphia police detective John Book, who is investigating the murder of a fellow cop. The only witness is a young Amish boy named Samuel, who identifies the killer as yet another policeman. After being shot by the suspect, Book takes Samuel and his mother, Rachel, back to their rural farm. Too injured to return to the city, Book ends up staying on the farm to heal.

Although the movie is bookended by a few action scenes, Witness, at its heart, is a love story. Rachel's husband recently died and a neighboring Amish man, Daniel, has an eye for her. She though, is fascinated and very much taken by Book. Their love is forbidden as Book is seen by the Amish as someone outside their order. Rachel's and Book's feelings for each other are obvious but subtle. Each moves cautiously around the other like someone building a house of cards, afraid that if they make a sudden move it will all fall apart. They stare constantly at each other. Even when they do not speak you can tell they are pining for each other. The symbolism of Rachel removing her bonnet near the end, speaks far more than any dialogue could.

As wonderful as the romance plays out, it unfortunately provides the movie's biggest plot hole. After Book heals, he calls his partner, who suggests that they go to the FBI or contact a reporter who would publish the story. Either piece of action would have saved the mother and her boy. Book decides instead to do nothing. Well actually, he does do something, he milks a cow, goes to a barn raising and builds a bird house. People are out there trying to find and kill him, Rachel and Samuel and he is acting like a school kid spending the summer on a farm.

Although it makes little sense for him to stick around, the movie's best moments come from Ford interacting with the Amish people. My favorite such scene is when a tourist wants to take his picture, thinking he is Amish. Ford says to her, "Listen, lady, you take my picture and I'm going to rip off your brassiere and strangle you with it." It is not very Amish of him.

Besides Ford, Witness has a very memorable cast. McGillis was the "it" girl of the moment. The following year she would score big again in Top Gun, opposite Tom Cruise. Danny Glover was having a great year. The Color Purple came out in 1985 as well. Making his film debut was Viggo Mortensen, although his part calls for little more than to just look at Ford.

Godunov only made a few films. His other notable part was in Die Hard. However, he made headlines for his personal life. He was a ballet dancer who was fired by one time friend Mikhail Barysnikov. He escaped Communist Russia by asking for political asylum in the U.S. when his troupe was on tour. His wife was not so lucky and was left in Russia. Godunov died in 1995 at 46.

With that kind of a cast, it is amazing that Haas steals the entire picture. At nine years of age, he conveys the most sincere performance. From casually showing Book the farm, to witnessing the murder, it is Haas who truly draws you into this world of clashing cultures. Weir lingers on his actor's faces. He lets their expressions control the scenes and not the dialogue. With Haas, and his big dark eyes, he had the perfect child actor for the role. 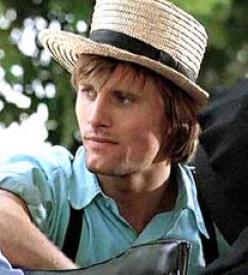 As Eric wrote, Witness was a departure for Ford. It was his most character driven part up to that point in his career and he gives a sensitive, heartfelt performance. Fortunately for him Witness was a big hit at the box office, although it didn't make it to the top spot until its fifth week in release thanks to the juggernaut called Eddie Murphy in Beverly Hills Cop. Oh and for his troubles Harrison Ford received his one and -to date- only Oscar nomination as John Book.

Witness has a textbook structure and it's easy to see why its screenplay is often studied by budding screenwriters. It was based on a script that had been floating around Hollywood for a decade, written by William Kelley and Earl W. Wallace for an episode of the long running television show Gunsmoke. This classic plot structure allows for a great emotional arc but at the same time it makes the movie somewhat formulaic and predictable. There really aren't any surprises once Samuel recognizes the cop in the photo as the killer from the train station men's room. Everything plays out like a movie.

Witness takes elements of a buddy-cop movie, adds a fish-out-of-water/clash-of-cultures twist that leads to an intense -if mostly chaste- love affair and caps it all off with some explosive action and a bittersweet ending. All of the different elements are handled well and fit together nicely. I see Eric's point about the scene's of John Book playing at farming. He does seem pretty relaxed and not overly concerned with the imminent danger his presence is placing them all in. It isn't until Book publicly beats up some obnoxious bullies and gains much local attention that he plans any definite course of action.  I agree that Lukas Haas holds everything together with his wide-eyed innocence.  Samuel is intrepid and curious and you can see all that in Haas's eyes.

I enjoy the gentle humor in Witness. One of the funniest scenes occurs after Rachel spends the night with Book's sister (played by Broadway's Patti Lupone). She begins telling Book all the things his sister really thinks about him - in great detail; proving she is not only smart she has a wonderful sense of humor as well. Besides the humor, Witness also makes a point about violence. How it is self-perpetuating. There is a scene between Samuel and Eli where Samuel says he would only kill bad men. This goes against Amish beliefs. Eli points out that after Samuel has witnessed just one brutal act of violence it has already changed him, as he has rejected his pacifist teachings.

I vividly recall that winter/spring of '85.  I was 17 and a senior in high school at the time. Witness and Beverly Hills Cop were two movies I loved then and I love them both now. 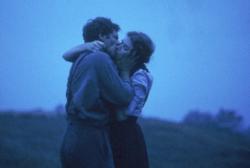 As Eric wrote, in 1985 Harrison Ford was on a huge roll with the Star Wars and Indiana Jones movies. Prior to Witness he was known mainly as an action star who specialized in big budget summer movie fare. This film was a turning point in his career, especially because of the Oscar nomination and respect it garnered him. It seems that in many ways he has been chasing another nomination ever since. In fact, for the next seven years after this movie, apart from one Indiana Jones film, Ford would shun the action genre in favor of more lowkey films. It wouldn't be until the 1990s that he would return to action films with the Jack Ryan series and movies like Air Force One. It would be interesting to see what his career would have been like if he hadn't been nominated for this movie.

The cast as a whole is quite good, but Lukas Haas doesn't steal the movie. He gives a very sincere performance for a child actor, but this is undoubtedly Ford's movie. He delivers a very solid, nuanced performance. He's still playing the action hero, but this time as a three-dimensional human being. Perhaps director Peter Weir was partly responsible for this, drawing out a great performance from his star. Ford obviously enjoyed working with him as his follow-up film to this one was the Weir directed, and far less successful, Mosquito Coast.

In some ways this film emulates Alan Ladd's Shane. A gunslinger, or in this case a cop, finds himself on a farm where he spends a pleasant interlude away from his normal, violent way of life. Of course, like Shane, John Book's time of peace has an expiration date. The motivations of Shane and Book are different and Shane's rationale for staying on the farm makes more sense than Book's, but there are definite similarities between the two films. Both films also feature a young boy who admires the gunslinging hero and both films end on a bittersweet note.

Weir's direction is well done. He enjoys long scenes with minimal dialogue. What's impressive about this is that he uses this technique without prolonging the film. In all of the romance between Book and Rachel, only one line of dialogue in the entire film speaks overtly of it. He tells her the day after he saw her naked that if they'd made love, he would have to stay or she would have to go. Apart from that one line, their entire love affair consists of polite conversation, many longing looks and one scene of intense kissing. Yet, you feel the passion between them throughout the movie. Rachel may end up as Daniel's wife, but she'll never feel the same heat with him as she did with Book.

Ford was indeed at the peak of his career with this movie. He was a proven box office winner and now an Oscar nominated actor. He would go on to make other hit films, but his career has never again hit the dizzying height it was at in 1985.