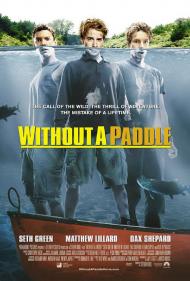 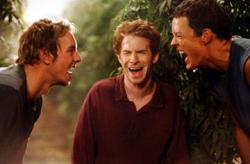 Dax Shepard, Seth Green and Matthew Lillard in Without a Paddle.

Without a Paddle wants to be this generation's City Slickers. Three best friends, unsure about the directions their lives have taken, embark on a trip in the hopes of finding themselves. Only where City Slickers had talent, humor, and heart, this movie has poop in a bag jokes.

When three childhood friends reunite for a fourth friend's untimely funeral, they decide to complete a trip they had planned since childhood. They decide to trek into the Oregon wilderness to find legendary plane hi-jacker D.B. Cooper's lost treasure.

Seth Green plays Dan, a doctor with every phobia known to man. Mathew Lillard plays the straight man for once, as Jerry, the guy who doesn't know if he wants to commit to his girlfriend or not. And Dax Shepherd, the least well known of the three, is Tom, the 'comic' relief of the group. Each of the actors seems to be vying for the title of least likable or most annoying or least interesting character in the film. They all do such a bad job with the limited material it's hard to say who's the winner, although the loser is clearly anyone who has to sit all the way through the movie.

Not only are all the jokes completely predictable, but also completely not funny. And any of the jokes that are even slightly amusing, were already given away in the previews.

To put the blame for this movie on the actors is perhaps a little unfair of me. The true blame belongs to the five writers who are credited with actually writing this crap and the movie's director, Steve Brill. Brill is of course the same man who brought us the Adam Sandler classics, Little Nicky and Mr. Deeds. With that pedigree, I guess no one should be surprised by the quality of this movie.

The attempts at humor range from bags of poop being dropped on top of heads to homophobic hilarity as the three guys must snuggle together in their underwear to keep from freezing. Burt Reynolds's eleventh hour appearance as the crusty mountain man does nothing to lift the film.

August is the traditional dumping ground for movies that aren't good enough to face the stiffer competition of an early summer release. Without a Paddle provides ample compost for the heap. 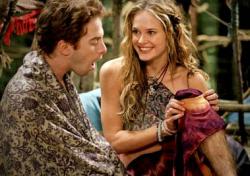 Seth Green in Without a Paddle.

Scott, I have discovered one of the best ways to enjoy a childish movie. Take a child with you to see it. I recently caught this on television with my sons and they loved it. The three best friends all act like juveniles and so a young male audience can certainly relate to them.

Some of the lines are fairly generic, "Billy's dead and he still has a better chance of getting laid than I do." I found several though, to be quite funny. I liked it when one of the guys christens a beer bottle on a rented canoe and the canoe owner says straight faced, "Thanks for breaking glass where my kids play."

My sons liked the antics of the bear and the hill billies. I liked Tom. "So you're saying you lost the map? You don't have it?" He asks Jerry. "No, I'm saying I forgot to hold on to it while my ass was free-falling over a 100 foot waterfall." Still not clear, he continues, " So you don't have it?"

Even Reynolds has a few funny scenes at the end. "I spent the best years of my life sittin' on the porch, playin' the harmonica, waitin' for somethin' better. And the years have been goin' by faster, and faster, and then, all of a sudden, I was an old man." He says wisely to Tom, who responds, "Well I bet you can play the shit outta that harmonica!"

Sure Scott, Without a Paddle is middle school humor, but there are some laughs to be had here. 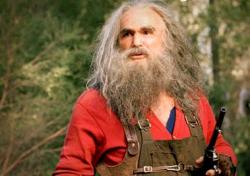 I was in the mood for some mindless, juvenile humor this morning and Without a Paddle certainly fit the bill. Sure the jokes are stupid and obvious, and most of the slapstick is pretty bad, but I was entertained by it in a very low brow way. Scott, you were a bit harsh in your review. It's not that bad.

You were particularly hard on the cast. Seth Green, Matthew Lillard and Dax Shepard are fine here. I mean it's not exactly Shakespeare after all and they are totally believable as three life long friends who know each other very well. They each convey a distinct personality. The script manages to sneak in just enough heart to offset the silly humor.

Clearly City Slickers was an inspiration for it but there is also a bit of Stand By Me as well. The tree house at the beginning looks similar to the one from that movie and the journey they take brings them face to face with a dead body. But the biggest inspiration was clearly Deliverance which Without a Paddle attempts to parody with the violent rednecks hunting down three men from the city who get lost while on a canoe trip. The appearance from that movie's star, Burt Reynolds, clinches the deal, even if the script fails to take full advantage of the comic possibilities. OK, so this movie is nowhere near as good as any of those I've mentioned but it is worth a few laughs.

The tree hugger chicks living in the elaborate tree house in the middle of the woods were mildly funny, even if their scene does end with bags of poo being dropped on the head's of the bad guys below. And, like my nephews, I laughed at the bear's antics, even though I'll freely admit it's incredibly stupid humor. The bear, by the way, was played by the hardest working bear in show business. Bart the Bear is his name and his impressive resumé includes Dr. Dolittle 2, Into the Wild, Zookeeper, and We Bought a Zoo.

Being from the same generation as the guys in the movie probably helped my enjoyment of it (although evidently it didn't for Scott). The C-3PO action figure brought back memories, as did the inclusion of Culture Club's first hit song “Do You Really Want To Hurt Me?” Without a Paddle is by no means a good movie but it is an occasionally entertaining one, provided you can watch it through the non-critical eyes of your 13-year-old inner-child.