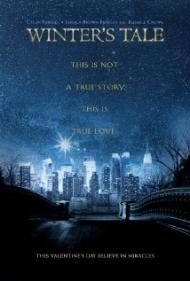 This now marks the second time I've been disappointed by this story. Once when reading the book upon which this film is based, and again, even more so, when watching this adaptation. However, in each case I was disappointed for different reasons. Both book and film begin with a very intriguing premise. Where the book becomes a sprawling, philosophic epic that loses its way by trying to cram too much into it, the film goes the other way, oversimplifying it into a sappy love story with some supernatural trimmings. Somewhere in here there's a good story, but no one has found the right balance with it yet.

Colin Farrell stars as Peter Lake. A thief in New York City in 1915 being chased by his former boss, Pearly Soames (Crowe). Peter escapes with the help of a magical horse, who leads him to his destiny, which seems to be into the arms of a dying young woman named Beverly Penn. It's difficult to explain more about the story without giving things away, so I will only say that the rest of the plot involves angels, demons, a very long life (part of the story also takes place in 2014) and other assorted supernatural elements.

So much has been changed from the book that there's almost no point in comparing them. But then given how long the book is, there is simply no way you could have turned a faithful version into one movie. However, writer/director Akiva Goldsman makes no attempt to do so and by the halfway point the plot has almost completely diverged from the book to the point where if it weren't for the names, you might never guess they were based on the same story.

Goldsman reduces the epic, many plot strands of the book to just two for the movie. There's the battle between good and evil as represented by Peter Lake and Pearly Soames, and the love story between Peter and Beverly. The battle though, is far too tame, and the love story is ridiculously sappy. The ending to neither is very satisfying.

Despite the weak script, the cast gives it their all. It is only because of them that the movie is enjoyable at all. Colin Farrell remains as charming as ever and because of him, I wanted to spend more time with Peter Lake. Jessica Brown Findlay (Downton Abbey) is likewise quite good as Beverly. Farrell and Findlay share a nice chemistry and during their brief time together they manage to heat up the screen a tiny little bit. Crowe is also excellent as Soames. He is a fairytale villain in the very best way who is cheated, as are all the cast, by the script. Jennifer Connelly has a small and thankless role in the modern portion of the story. And the less said about Will Smith's performance, the better, except that I will just say that his appearance made me laugh out loud and no, it's not an intentionally funny scene.

The love story, which starts nicely, ends up far, far too sentimental. There are two precocious little girls in the film connected to the love story, who almost literally had me vomiting in my mouth whenever they spoke, although I don't mean that as an insult to their acting abilities, but simply the tripe they are forced to speak and the direction they must have been given by Goldsman. And I say this as someone who's man enough to admit that he enjoys a good love story when he sees one. The key word in that sentence, though, is "good", which this one is not.

It was over 30 years ago that the original novel came out. There have been many rumors of adaptations in the intervening years. Martin Scorsese reportedly toyed with the idea of filming it, but ultimately declared it, "unfilmable". After seeing this version, I think he may have been right.

Unlike Scott, I never read the book and after watching this film have no real interest in doing so. I am not sure if Akiva Goldsman wrote the dialogue or used direct quotes from the novel by Mark Helprin but this film has some real doozies. The dialogue ranges from fortune cookie, “Man’s destiny is often not what it seems.” to Hallmark card, “We are voyagers set on a course towards destiny, to find the one person our miracle is meant for.”

The cast is truly good and seem to enjoy delivering such lines as Jessica Brown Findlay narrating, “When true love is lost, life can bleed no meaning.” I like this line spoken by Collin Farrell, “I was an orphan. Orphans don’t have vanity. I am not quite sure why but one needs parents to be vain.” Russell Crowe makes a great demon in human form. He has such lines as, “I have been blackening souls and crushing miracles for longer than I can remember.”

The dialogue, filled with references to miracles and destinies, stands out but the cinematography is fantastic. It is at once romantic and warm. Picture Currier and Ives by way of CGI. There is snow and horses, ice skating and smoke stacks. It is a fantasy world that seems oh so inviting, yet is inhabited by very active devils and angels.

This story involves all sorts of fantasy elements and plot points that are rarely explained. We can excuse the flaws by chalking it up to magic, the power of God or a screenwriter who knew not where he was going with the script. The film even includes a line that tells us to not ask questions and to just accept it, “In a life this long, you do see things, things that don’t always add up to the world we think we know.”

Winter’s Tale is an ambitious effort. It is visually sumptuous and strives very hard to say something great. As Scott noted, it is very sentimental and your capacity for it may determine how well you like this film. I am a sentimental person but the characters did not draw me in. Their motives are vague. I never felt for Peter Lake or overly concerned about his mission to save the red haired girl. At least the film looks good and where else can you hear such lines as, “I am just a mechanic but what are we if not machines, machines that need a little help from the universe to run.” 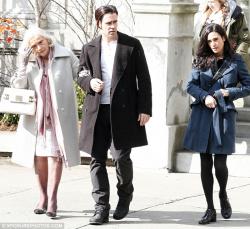 Like Eric, I haven't read the novel, and I'm with him on the fact that I have no desire to after watching this wretched film adaptation. Sure the cast is good and it's visually stunning but the plot is god-awful (pun intended). The love story angle is pure schmaltz while the fantasy element of good versus evil is inane. I mean seriously, human being's miracles become stars in the sky?! Isn't that precious. What is this a five-year-old's bedtime story?

And it's based on a seemingly random set of rules, such as the fact that the demon played by Russell Crowe cannot leave the five boroughs of New York City without getting special dispensation from Satan. Just why this is the case is never explained (maybe it was in the book?) the audience just has to accept the fact that, apparently, Hell is run a bit like a union. Like Scott, I chuckled when Lucifer, the Prince of Darkness himself, turned out to be the Fresh Prince of Bel-Air.

I did enjoy seeing Eva Marie Saint still working at the ripe old age of 90. How many actors still making movies today worked opposite both Marlon Brando and Cary Grant? They didn't bother making her up to look older even though her character had to be well over 100 in 2014, since Willa was at least 6 or 7 in 1916. As an actress this Oscar winner has gotten more interesting with age, now if only she could get cast in a decent movie.

After this movie and Noah does Jennifer Connelly make non-religious themed movies that don't costar Russell Crowe anymore? It's a close race as to which movie is the more forgettable. You'd have to pay me to ever watch either of them again. But at least in Noah she had a starring role, whereas here she has a rather thankless supporting part. The best thing I can say about her in this movie is that at 43 she remains strikingly beautiful.

Colin Farrell and Russell Crowe both give their all. They have such opposite looks and personalities that they make great on screen enemies. I would have preferred seeing more of their past relationship before their personal war began. The less time spent on the sappy love story the better.

As Eric's review proves, at least some of the dialogue is memorable, even if it is a bit on the flowery side. I'll end my review with two of my favorites. Pearly Soames to Lucifer about humans, “...nothing seems to break their capacity for hope. They pass it back and forth like the flu at a preschool fair.” And the red haired girl's father, played by William Hurt, grilling Peter Lake about himself, “Be brief. If you were one of my reporters, you'd be done by now. God created the world in six days. Ape him.” If only the screenwriter had followed this advice.