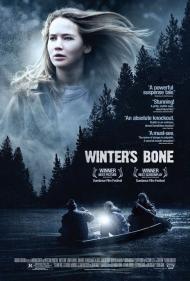 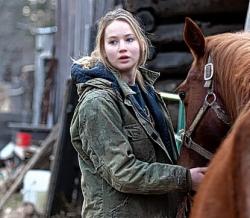 Every year I try to see as many of the award nominated movies as possible. I do it not just to get a leg up in the Oscar pool, but also because it forces me to watch some movies that I otherwise would never see. Winter's Bone is a good example. I would never normally have watched a movie this stark and depressing as I prefer my movies to be more entertaining than this, but having seen it I can certainly appreciate the talent behind the making of it, even if it still isn't my cup of tea.

Jennifer Lawrence (soon to be seen as a young Mystique in the upcoming X-men: First Class) stars as Ree Dolly, a 17 year old girl holding her family together in the Ozarks. When the movie starts the sheriff arrives to tell Ree that her father, who's been arrested, has put up the family house as collateral for his bail bond and if he doesn't show up in court they will lose the house. It's up to Ree to track down her dad who is involved, as are seemingly most of the people in the area, in the creation and selling of crystal meth. Her journey will take her through the rough and violent underworld of these country mountain folks.

The movie is filmed in a very real and stark manner. There's absolutely nothing glamorous or outwardly beautiful in the whole film. It's often slow paced, with little character moments that do nothing to advance the plot, but instead show what kind of person Ree is. The ugliness of the people and the setting is often a slog to get through. Apart from Ree, there seems to be no one with redeeming virtues. Although you want to see her triumph, it's hard to imagine that even if she does there will be much of a happy ending.

Lawrence does a good job in the lead role. The entire movie is balanced on her shoulders and is told from her point of view. It's not a showy part because it's not that kind of movie. All of the acting is subdued and naturalistic. By the time the movie ends you really feel as if you know Ree. It's easy to see why nearly every critic's group in the country has either nominated or named her as Best Actress. It's the kind of part that can get a young actress a whole lot of attention.

Almost reluctantly I was drawn into Ree's world. As her journey dragged on and she seemed no closer to locating her father I did find myself wanting her to succeed. The violence and the ignorance of the people she is dealing with are obstacles you want to see her surmount.

The pace of the film is rather slow, which is the movie's biggest weakness. There's about an hour's worth of story in an hour and forty minute's worth of running time. And the depressing nature of the story makes it feel even longer. The editing and the handheld camera work gives a rough edge to the story that makes it seem self-consciously artsy.

Every award's season there's always one or two movies nominated that hardly anyone has actually seen. Winter's Bone is one of those for this year. It's not something that I would ever want to see again, but despite the slow, depressing nature of the story, I am glad I sat through it once. 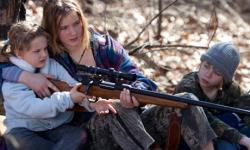 Gonna shoot us a squirrel.

After about fifteen minutes of screen time, it was obvious that Winter's Bone was written and directed by women. All the men are dicks, each presenting Ree with more problems. Her friend's husband is not helpful. Her uncle sits there with his tattoos, smoking a cigarette loading his gun. He then puts his hands on her threateningly. The next guy is a drug manufacturer and just as useless and so on and so on. Even the sheriff who shows up to tell her about her dad is merely delivering bad news, as does the Army recruiter.

All of the women however, are sympathetic to her. They offer her what help they can. They boarder her horse, give her and her siblings some food. They answer what questions they can. When she tells one woman who she is, the other woman asks, "One of my nephews is Buster Leroy, n didn't he shoot your daddy one time?" Even when the women beat her up it seems they did it more out of preserving themselves than out of actual animosity towards Ree.

Based on the novel by Daniel Woodrell, Winter's Bone clearly has a serious bone to pick with poor white country folk. These hillbillies do not get a fair shake. Everyone is portrayed as a backwards moron with a criminal past and or lifestyle. No cliche is missed. Everyone drives a pickup. Ree teaches her younger siblings to shoot a gun. They have horses and eat deer and squirrel. Her best friend's husband is dressed for some motor cross sport. Ree visits a cattle auction. One house Ree visits is having a birthday party where they sit around picking on guitars and banjos.

Woodrell grew up in a small town near the Ozarks and no doubt wrote from his own experiences of living in a small town. However, he himself joined the Marines, earned a BA from the University of Kansas and an MFA from the University of Iowa, There is a mention of Ree wanting to join the Army but this movie seems far more like an insult to these country people than a realistic portrayal. No one is ever shown being the least bit happy. Whether it is at a bar or the birthday party, everyone looks like they cannot wait for death to end their misery. Even the children look defeated.

I do not believe Woodrell intended that depiction but the director, Debra Granik, is from Massachusetts and treats these Ozark folks like they are from a foreign country. She never shows anyone using a cell phone, computer or any sort of hand held electronic device. These people are from a small American town, not some third world country. Does this movie take place in the 70s? Even people on government assistance have luxuries. Speaking of Government assistance, Ree never thinks to look there for help. The only thing that makes this a modern tale is that it proudly features Meth.

It may seem that I am taking this a bit personally and I am. Patrick, Scott and I are one generation removed from hillbilly. Our father hunted squirrel. Yes, we ate it. Our father grew up in a house that did not even have running water. He does however own a cell phone and knows how to build almost anything. He taught me to fish and filet a bass. Winter's Bone portrays these country people as miserable, but my memory of my hillbilly grandparents are of a happy couple that raised five sons, four who served in the military and all raised many children of their own. None manufactured or used meth.

Writer Daniel Woodrell coined a name for his style of writing. He calls it "country noir". I haven't read the novel Winter's Bone but judging by that self-given label I can only assume the book is as dark and haunting as this movie. Eric, did you actually read the novel or are you simply making assumptions about what you think the screenwriter and director changed?

As it's a story about a young woman searching for her daddy deep in backwoods crystal meth territory I don't think it's surprising that most of the characters are losers. And I don't think the female characters are portrayed as being superior to the men. Just look at Ree Dolly's mentally ill mother. Nor do I think this movie is trying to say that all country people living in the Ozark hills are this backwards.

Jennifer Lawrence gives a gut-wrenching performance as Ree Dolly. She's one of the great feminist characters of all time. She is as fearless as she is smart, and completely dogged in her search for her father. How many of us would have been able to do what she does? Lawrence had to learn how to skin squirrels and chop wood for the role. But her performance is much deeper than that. Sure she physically embodies the part but she also imbues Ree Dolly with a dignity and compassion that belie her tender age. She was still in her teens at the time and was very much deserving of the Oscar nomination she received (she lost out to Natalie Portman for Black Swan).

(As Eric said, our father hunted rabbit and squirrel when we were kids and watching Ree Dolly teach her little brother to skin a squirrel brought back a rush of childhood memories.) The title, by the way, comes from an old Appalachian saying, "like a dog digging after a winter's bone" meaning a person (Ree Dolly) searching for something with grit and determination.

Yes the story is as bleak as the winter countryside depicted in the movie. But it also demonstrates the indomitable nature of the human spirit. Ree Dolly takes care of her mother and two younger siblings. She has a strong back and an even stronger mind. She is willing to sacrifice her own potential for their sake. The story ends on a happy note as Ree promises to always take care of her familial responsibilities. She is a true heroine and this performance made Jennifer Lawrence the biggest female movie star to emerge this decade.