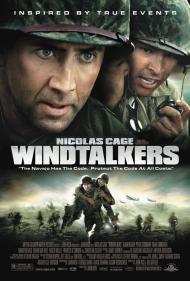 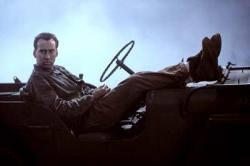 Windtalkers is a great war action flick! John Woo is the master of the fight scene. This movie had me jerking out of my seat. The plot is simple enough. A battle scarred, literally and figuratively, marine is assigned to protect a Navajo code talker. A Navajo code talker being a radioman who speaks in a code based on the Navajo language that the Japanese cannot decipher. However, the marine is also ordered to protect the code. Which means he would have to kill the radioman if he were about to fall into enemy hands.

There has been some debate in the media as to weather that part of the movie is historical or not. The dilemma being that no where is such a rule in writing. I was in the Navy and my Senior Chief Petty Officer was a former Marine Radioman in Vietnam. He once told me years ago that he was fully aware that the side arm his Sgt carried would be used on him if he were about to be captured by the enemy. Some rules are not always written.

Nicolas Cage does a great job as the emotionally empty Sgt assigned to "baby-sit" the radioman. He is not thrilled with this assignment until he realizes how much action he will see. In one scene he is so caught up in killing the enemy that he looks like some wild animal in a fit of bloodlust.

The radioman, played by Adam Beach, is unaware of his 'bodyguards' full instructions. He naively approaches him and attempts to make friends. Their relationship rises this to an above average war movie. Eventually the radioman rudely discovers the secret and his character changes from a innocent radioman, who has barely fired a shot, to a more aggressive soldier. He has his 'assumed' comfort zone pulled out from under him. The Sgt in turn realizes he has in fact made a friend out of the radio man and may want more out of life than just to kill.

Now don't go thinking this is a touchy, feely war movie. That is just icing on the cake. This is an action packed, tension filled war story. John Woo's action scenes are the best of the movie. Just a suggestion if you go to watch it, don't become to familiar with to many of the characters. Most of them don't make it to the end. The violence pulls no punches.

If there is any flaw in the direction it is Woo's over use of the close-ups. I can't count how many times we see close ups of Cage's face. Another distraction is some flash backs. They are there to explain the Sgt's motive for being so emotionally cold and aggressive. However, we see these scenes in full at the beginning of the movie so why did he repeat parts of those scenes several times through out the film? Does he think the audiences memory is that poor?

Too often war movies are just about the violence. The characters are just stereotypes between action scenes. Here, the two leads grow from the experience. Although Saving Private Ryan is a great war movie, it does not have the character development of Windtalkers. This is a movie that I will definitely add to my DVD collection.