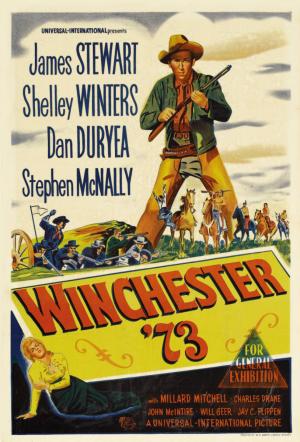 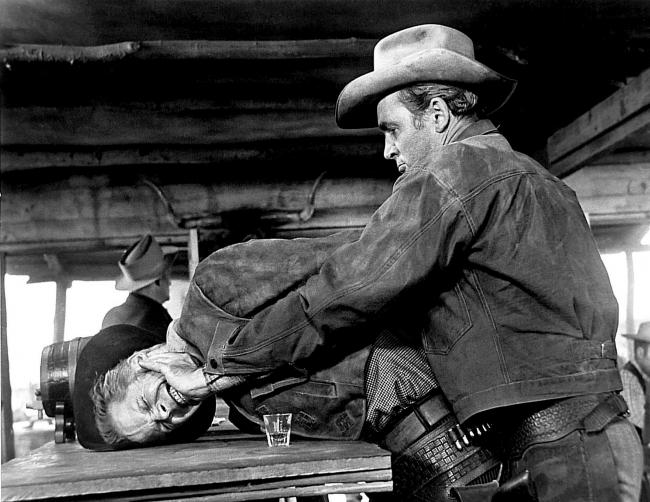 Winchester '73 is the first of five westerns Jimmy Stewart made with director Anthony Mann. Stewart was looking to toughen up his reputation and prove that he still had what it took to be a star following several post-war flops. So unsure of what they perceived as a fading star was the studio that they refused to meet Stewart's salary demand of $200,000. He volunteered to take a cut of the profits instead, one of the first such deals between a star and the studio, and ended up taking home nearly $600,000, while at the same time reviving his movie career.

As the title and opening introductory text indicates, much of the movie revolves around a Winchester '73 rifle, supposedly one of the finest rifles ever created, nicknamed, "The gun that won the West." Stewart plays Lin McAdam, a man we don't learn much about right away. He's hunting a man, but we're not told why. When the film opens he catches up with his quarry in Dodge City, but is unable to take action because all weapons are confiscated by Wyatt Earp (played here by a past his prime, out of shape, Will Geer (that's right, Grandpa Walton, already looking old in 1950)). Instead of shooting each other, Lin and Dutch Henry (his prey), shoot at targets as each of them volunteers to participate in a shooting contest in which first prize is the titular rifle. Without wishing to give away much more of the plot, suffice to say, both man and rifle escape Lin's grasp and he spends the rest of the movie in pursuit of both.

Shelley Winters appears in the mostly thankless role of the female lead. As she later complained, the script made the men seem more interested in the gun than in her! A couple of other famous faces pop up in small roles. Rock Hudson plays an Indian with unironical stiffness, giving little indication of future stardom apart from his slim physique. Tony Curtis makes even less of an impact as a cavalry man in a couple of scenes. Although not as famous, Dan Duryea and Stephen McNally are both effective as the main bad guys.

While the story is short and simple, there's a dark streak underlying it. Winters' Lola is a barely disguised prostitute, although they use the term "dance hall girl", it's clear what they mean. Later, when Lola and Lin are with a group surrounded by Indians, they have a discussion about Lola saving a bullet for herself if things go wrong. And the final resolution, including the reason why Lin is chasing Dutch Henry, and their relationship to each other, adds to the dark tone of the story. At least some of this darkness must be attributed to Anthony Mann, who first made his name as a director of films noir in the 1940s.

At just 92 minutes, the story keeps moving along. It never stops really. Plenty of filmmakers, both from that era and today, could learn a lot about pacing from movies like this one. Too many movies want to be epics, when often an action packed short story, like this one, can be much more entertaining. 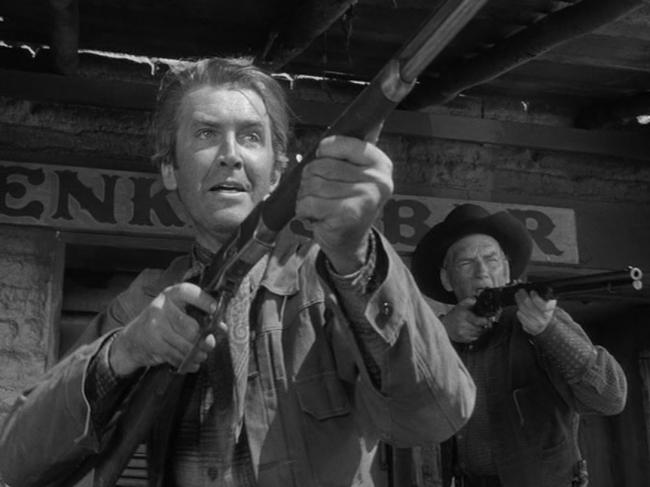 Winchester '73 has been given credit for advancing the western genre as it was one of the first to feature a more complex story. As Scott wrote, there is a dark tone to the film and it works very well to keep us watching as to the mystery of the pursuit of Dutch and the titular rifle. The story is not exactly action packed but it moves along very well with something always happening on screen to keep our interest.

It works best when things are tense, which is most of the film. It starts with the shooting contest. Then there is a robbery and fight and so on until the inevitable showdown.The scene in Rikers, an isolated desert bar, felt a bit like The Hateful Eight (2015), as several low life men gather in a building. All are on edge but pretending to be civil so as to gain something. My favorite moment is when the Calvary is surrounded by Indians about to attack. It is that penultimate moment in many westerns but here it is merely a part of Lin's journey.

This is definitely a film worth watching a second, or third, time. Once you know the reason why Lin is chasing Dutch, the film becomes an entirely different movie. On a second viewing you realize that clues have been left along the way as to Lin's motives. The scenes Lin and Dutch share have a lot more depth when you know the truth.

Another thing I liked about Winchester '73 is that it incorporated actual people and events into the story. Legendary, but real, lawmen Wyatt Earp and Bat Masterson make appearances. Such famous battles as Bull Run are discussed. Custer's defeat at Little Big Horn is a subject of several conversations and seems to be inspiring other Indians.

I first saw Winchester '73 when I was a kid. I enjoyed it then and still do today. This is easily one of my favorite westerns ever made. 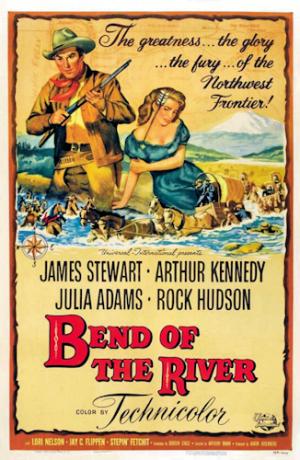