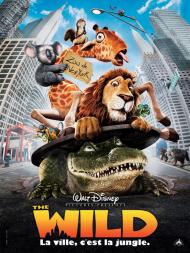 Although the makers of The Wild might argue that because this movie was in production for so long, it didn't actually rip off ideas from Madagascar, since they started it before Madagascar was released, but it really doesn't matter. The fact is, the two films are so similar in plot that you can't help but compare them. And while Madagascar was no great cartoon, compared to The Wild it was fantastic.

The story centers around Samson, a lion at the Central Park Zoo. His son, Ryan, is resentful of living in his father's shadow and can't wait until he develops his roar. All his life he's heard stories of his father's life in the wild and Ryan becomes convinced that if he grew up in the wild, he'd have a massive roar like his dad's.

After Ryan sneaks into one of the metal containers at the zoo he is taken aboard a cargo ship that is bound for Africa. Samson sets out after his son accompanied by a misfit crew of animals also from the zoo. After a trip through Manhattan, the group ends up stealing a tugboat that they are somehow able to navigate all the way to Africa without running out of gas or dying of thirst. Upon arrival, they set off into "The Wild" to rescue Ryan.

Ever since Pixar came out with Toy Story there have been a plethora of computer animated features. They all want to imitate Pixar's success, but no one has and the reason is very simple. Not only does Pixar make great looking cartoons, they are also well written cartoons. The Wild, for example, looks pretty good, but the script is just plain bad and the jokes are just plain awful.

With a running time of an hour and a half, the story should fly by, but instead, dragged down by lame jokes and a plot we've seen before, seems nearly twice that. At a recent screening of Ice Age 2, the children packing the audience were laughing uproariously, here the laughter was sporadic and half-hearted. When even the target audience for a movie can't get into it, you know something's wrong.

The only enjoyable character in the film is Nigel the Koala, voiced by British standup comic Eddie Izzard. Izzard manages to be the only one who seems to be having fun with his character and brings some much needed humor to the proceedings. His moment of madness on the tugboat and his impersonation of the Statue of Liberty are two of the movie's highlights.

Since I'm not sure if my brother Eric will see this movie, I'll just mention for him that once again Disney has created a cartoon that features a single parent. Ryan's mother is never even mentioned and since it has absolutely no bearing on the plot whether she's there or not, the exclusion seems pointless other than to carry on the Disney tradition.

Now that Disney owns Pixar, hopefully they will just leave well enough alone and let Pixar get on with making the animated movies since even just the preview to their upcoming Cars that ran before The Wild contained more laughs than this movie did.