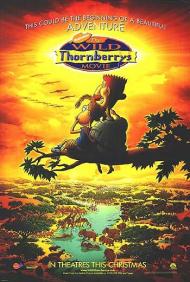 Nickelodeon is proof positive that you can make an animated movie about kids whose parents are still with them. Take note Disney. The Wild Thornberrys and The Rugrats are both very popular kids shows that are invading the big screen. Unlike Disney's onslaught of single parent kids' movies, Nickelodeon actually applauds the nuclear family.

This is best represented in The Wild Thornberrys Movie. Two sisters, Eliza and Debbie travel the wilds of the world with both of their parents, a British father and an American mother. The father hosts an Animal Planet type show and the Mom runs the camera, filming his lectures. Eliza, the younger sister, has the secret ability to talk to animals. Her constant companion is a monkey with an upper class British accent named Darwin. They also have an adopted wild brother named Donny. Donny is just around for laughs. He does a crowd pleasing Wedgie Dance. You have to see it.

While baby sitting some leopard cubs. Eliza loses one to a poacher. She becomes so distraught by the event that the family decides to send her to England with Grandma to attend a private school. Darwin sneaks along and causes the funniest scene in the movie when he dresses like a school girl to sneak into the cafeteria. A food fight ensues.

With the help of Eliza's snobbish room mate, Sarah, Eliza heads back to Africa. Once there, the adventure goes into full swing as Eliza comes across the poachers and dramatically exposes her secret about talking to animals in order to save her sister. Her best friend Darwin becomes just a monkey, as she can no longer understand his British accent.

With her family's help, all of course, turns out well. This is a wonderful family movie. Its ever present lesson is that a family, no matter where they go, is always a family as long as they are together. Disney likes to stretch the definition of a family to any group of people who like each other. Watch any of their movies for examples. It is nice to see a 'family' film, like The Wild Thornberrys Movie, where the family is actually a traditional family and not some new age liberal expression of it.