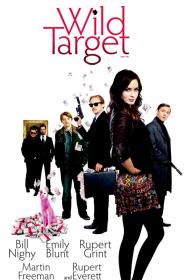 With its incredibly likable cast and entertaining premise, Wild Target should have been better, but it never goes far enough and isn't as zanily funny as it's trying to be.

Bill Nighy stars as Victor, an aging assassin.  One day he's hired to kill Rose (Blunt), a young woman who has just pulled off an art scam where she sold a fake Rembrandt to the wrong person.  Instead of killing Rose, he ends up developing a crush on her and decides to protect her instead.  Tony (Grint), is an innocent bystander who gets involved with Rose and Victor when he witnesses Victor kill another man sent to kill Rose.

In 2007, Emily Blunt played Bill Nighy's daughter in the BBC's Gideon's Daughter.  With the 33 year difference in their age, that certainly makes more sense than the 27 year old Blunt falling in love with the 60 year old Nighy as she does here.  Their romance is the least convincing part of the entire movie.  Part of Victor's story is that he's feeling the need to start a family and having a more fatherly relationship toward Rose would have made more sense.

Part of the problem with the story is that the characters are never really developed.  We know almost nothing about any of them.  Victor comes from a long line of assassins and some of the best scenes are the scenes between him and his mother played by Eileen Atkins.  Apart from the fact that Rose is a compulsive thief, we know nothing about her and Tony is a third wheel that could have been cut from the plot without losing anything.

The pacing also needed to be picked up.  It's not a long movie, but for the laughs it needed to be more like a screwball comedy.  At one point in the movie, Rose, Victor and Tony end up staying in the same hotel as the man who wants to kill Rose and you'd expect  some resulting door slamming and near misses, but it never really happens.

Martin Freeman has a small part as the big-toothed rival assassin who's sent to kill Victor and Rose.  He manages to wring a few laughs out of the part and fares much better than a wasted Rupert Everett.

In fact the whole movie feels like a wasted opportunity.  Such a good cast and premise should have been better.  It's a remake of a 1993 French Farce, but it feels so restrained as though the British reserve has weighed it down. 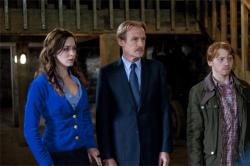 When Victor first saves Rose by killing another assassin, Rose says in shock, "You killed him!"  "I had to he was going to kill you."  Victor explains.  Rose buys it easy enough, "Okay then."  Their relationship starts in the usual romantic comedy way.  Their initial hate, "I have only known you for three hours and it would already take me three days to list everything I hate about you." turns into sexual tension, via a foot massage.  "May I...do the other foot?"

Rupert Grint has the least amount to do, yet I believe his Tony is what Victor needs more than Rose.  Victor needs a son to pass his legacy onto, as well as make mummy happy.  At 55 and with the social skills of a leper he is likely to never find someone to have children of his own with.  Grint's best moment is when he shoots the guy's ear off.  Victor plays the consoling father,  "You did what you had to do."

There is a bit of door confusion at the hotel.  A drunk Rose almost walks into the very room Ferguson, who wants her killed, is staying.  Speaking of Ferguson.  He is played by Rupert Everett who has clearly had work done on his face as the only thing that moves on it is his mouth.

I disagree Scott, the pacing is perfect.  It moves right along.  With Rose stealing anything and everything she can get her hands on, and people constantly getting hurt and or shot, the movie never stays still for very long.

I also disagree about the characters back story. We discover Victor's past through his mother and the visit to his family home.   Tony stays in Victors childhood nursery that comes complete with a crib mobile made of toy guns and targets.   Tony informs Victor he does not have parents.  Clearly he is likewise a loner.  It is only Rose who we learn the least about.

Scott, I am not sure what kind of mood you were in on October 2nd, 2010, but I think you were way too hard on this film.   How could you not laugh when his mother tries to kill Rose and Victor explains, "She means well." 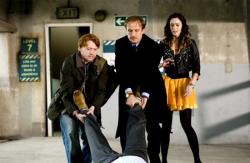 I'm with Eric on this one. I thoroughly enjoyed this silly little screwball/action comedy due almost entirely to the talents of the three main stars. I like a movie that keeps you guessing and moves fast. Wild Target does both. Once these three unlikely characters cross paths they take the audience along for a clever and funny thrill ride.

Bill Nighy is perfect as Victor Maynard. He's a fussy, fastidious old man that could easily be mistaken for gay but he's also a cold-blooded professional killer. His facial expression, with daintily pursed lips and a steely squint to his eyes, is right on target. His brief sexual confusion around Tony provides the story with an unexpected and refreshing twist. I never thought I would see a movie where Rupert Grint is a sex object but he spends much of this movie shirtless or in a bathtub, causing Victor to question his own sexual orientation.

The pacing of the movie is flawless. It starts strong by quickly introducing us to Victor and Rose, both of whom make a living with illegal activities. They cross paths in a brilliantly funny manner and once Tony gets added to the mix the story moves to another level. The next section deals with them in the hotel where they go to lay low. Each of them experiences a bit of humorous adventure here before they head out of the city for the movie's climactic third act at Victor's family estate.

I do side with Scott about the romance between Victor and Rose though. It's the weakest aspect of the story. Thankfully it happens quickly, near the end, so it didn't mar my enjoyment of the movie. It makes sense that she develops a crush on him but for them to actually get married seems rather unlikely (although it does set up the final gag). Especially since they already exhibit such a natural family dynamic. Tony and Rose bicker like siblings with Victor as their surrogate father.

Check out the scene where Rose nearly gets caught shoplifting. Victor chastises her like a parent in his stuffy and formal manner. Victor: “That was unbelievably irresponsible! Staggeringly immature!” Tony adds his two cents. “Staggeringly... staggering!” Rose is unabashed. “Fig roll anyone?” Tony: “I'll have one.” Rose: “Get lost.” Tony: “Not fair! Mr. Maynard!”

I agree that Eileen Atkins is a hoot as Victor's over-zealous mother. The scene where she attempts to kill Rose is very funny. But then I enjoyed the entire movie.  Wild Target is nearly a perfect movie, it just misses the bull's-eye.