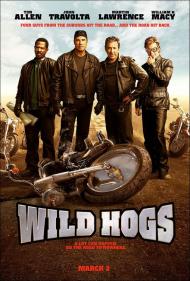 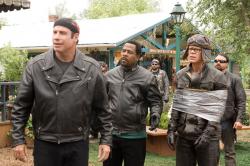 The best film ever made about men at middle age is City Slickers. In it, three best friends go on a vacation together and rediscover that their lives are not as screwed up as they thought they were. Wild Hogs takes the same premise and adds motorcycles.

Four middle-aged men get together once a week to ride their Harley and have a beer. Doug is a former wild frat boy but now is a mild dentist who no longer feels close to his wife and son. Woody's supermodel girlfriend has just left him and financially he is now strapped. Bobby has taken time off to write a book that he can't finish, while his wife is nagging him to get the job, he hates, back. Dudley is the 40-year-old virgin, computer geek. As in City Slickers, they all go off on a vacation together in an attempt to experience the kind of adventure you can only have with your best friends.

The best this movie has to offer is the dialogue, and Dudley (Macy), who is acting like a live action Ned Flanders, gets the funniest lines. When asked if he and his friends are a gang, he responds, "Yep-a-doodle." After eating some hot chili made by a girl he likes he says, "Mother of pearl, I've swallowed hot lava!" But when his ire is up he has lines like, "I got a girlfriend. Punch that out of me, bitches!"

By the end of City Slickers the three friends have all learned something about themselves and their situation in life. In Wild Hogs, the guys supposedly grow emotionaly by standing up to and getting beat up by a huge gang of bikers. Doug's son now thinks his dad is cool because he got into a fight. Bobby's wife starts to nag him for lying about where he was but then calms down simply because Bobby asks her to. Yeah, that is just how spouses who have been lied to act! The lesson in City Slickers is to accept and make the best of the life you have. The lesson in Wild Hogs is to do something to make others opinion of you change.