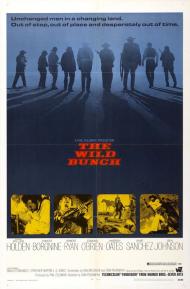 A bloody William Holden in The Wild Bunch.

The Wild Bunch is a groundbreaking Western from director Sam Peckinpah in 1969. It tells the story of an aging gang of outlaws going for one last big score in 1913 along the Mexican/American border. In terms of graphic violence and the amount of blood that spurts across the screen, Peckinpah took up where Bonnie & Clyde had left off. Its intricate multi-angle editing using slow motion photography was a revolutionary cinematic technique. In short, The Wild Bunch has become one of the most revered Westerns in the history of the genre.

It opens with a close-up image of two scorpions being devoured by thousands of ants as several young children watch with fascination. This is symbolic of all the carnage to come. The body count rises to well over a hundred by the time the end credits roll. It has been suggested that more blank rounds of ammunition were discharged in the making of this movie than live rounds were fired during the actual Mexican Revolution around which the story is set.

But it's more than just the sheer numbers that makes this movie so groundbreaking, it's the way Peckinpah filmed the gunfights that really changed cinema. The choreographed slow motion shots of blood spurting from bullet wounds is almost ballet-like in precision. With an average shot length of just three seconds the editing was also innovating. And Peckinpah did away with the generic gun shot sound that had previously been used in movies and made sure the different types of weapons fired each created their own unique report, as in real life. Its influence can be seen in literally hundreds of movies right up to the present day.

A haggard looking William Holden stars as Pike Bishop, the leader of his gang of outlaws. He is brilliant in the part. All his years of experience are written across his weather-beaten face. He's a bad guy but he's also noble. He gets the movie's most famous line when he stops a fight between two other members of his gang by telling them, “When you side with a man, you stay with him, and if you can't do that you're like some animal, you're finished!”

Robert Ryan and Ernest Borgnine head the cast of supporting players. Ryan plays a former member of the gang, released from a Yuma prison in order to lead a posse in tracking down his old partners in crime. Borgnine is William Holden's second in command. Their scene together around a campfire where they talk fatalistically about not having it end any other way reportedly left the director in tears, too moved to call out cut. The remainder of the cast (right down to the real life Mexican prostitutes) all give authentic turns. There isn't a false performance in the bunch.

The movie begins and ends with two incredible action sequences, each of which took several days to film. The first is where Pike's gang attempts to rob a railroad office of its gold but unknowingly walk into a trap. The final gun battle tops the opening one. It pits what's left of Pike's gang against hundreds of armed Mexican revolutionaries. It is so gloriously over the top yet so realistically filmed that more than 40 years later it has yet to be topped.

Sam Peckipah said his intent when making this movie was to show violence in all its bloody glory to counteract the sanitized, bloodless Westerns that seemed to glamorize shootouts. This was at the height of the Vietnam War and nightly newscasts were filled with dead bodies. He envisioned this use of hyper-violence to be a form of catharsis that would purge the audience of its taste for it. He later admitted to being wrong and that, on the contrary, audiences seemed to enjoy and even grow immune to, the rivers of blood spattering across the screen.

For better or worse The Wild Bunch changed cinema forever. There aren't too many movies you can honestly say that about. Peckinpah's direction is truly brilliant. It holds up as well today as the day it was released. A must see for casual movie lovers as well as serious students of film. 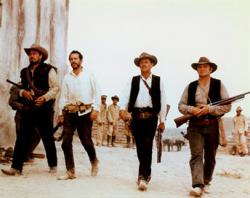 Peckinpah's filming techniques, with his use of slow motion and quick edits, may have been ground breaking, but this isn't a perfect film. The action sequences are excellent and I certainly agree with Patrick that as a technical achievement, it deserves all of its accolades.

In between the gunfights however, it's very slow paced, particularly in the extended cut. You could easily trim 30 minutes without losing any of the story. There's a leisurely pace to everything whenever anyone isn't firing a gun. There are several flashbacks that, apart from providing a tiny amount of backstory, also serve to slow down the pace of things.

The problem with this slow pace is that these aren't characters you want to spend time with. They're violent, ugly killers who use innocent bystanders, including women as shields in a gunfight and are only looking out for themselves and whatever gold they can steal. And those are the good guys. Angel, the "noble" member of the gang, who wants to keep the weapons out of the hands of the Mexican despot, has no qualms about shooting and killing the woman he loves when she goes off with another man.

William Holden does give a good performance as the aging gang leader. He captures the spirit of a man who lives by his own code in a time where that code is becoming something of the past. He's as much a criminal as the rest of them, but seems less twisted than the men underneath him.

Because there's a lack of sympathy generated for these characters, it's difficult to become emotionally invested in their final outcome. I can't say that I was particularly rooting for them to survive the final battle, which means that while it's technically well made, I was never caught up in the moment of it, but remained outside of it as simply an observer.

I couldn't help but compare this movie to Butch Cassidy and the Sundance Kid which came out in the same year and which shares several similar plot points. Both movies are about criminals at the end of the Old West who end up south of the border where a climax takes place between the main characters and a South American army. In that other film, Butch and Sundance break out from their hiding place and the movie ends with the sound of gunfire. This movie ends with the extended gunfight, but which one has a bigger emotional impact? Butch and Sundance, of course, because we actually like their characters.

There's no doubt that this movie has left a huge legacy. You can see echoes of Peckinpah in most action films today. Even the somewhat recent video game, Red Dead Redemption, was clearly heavily influenced by it.

Like a great many directors with a visual flair however, Peckinpah needed to have put as much care into the script as he did the slow motion filming and editing techniques. 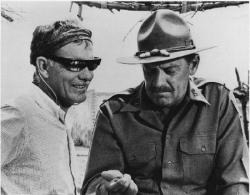 Sam Peckinpah and William Holden while filming The Wild Bunch

It could very well be argued that in 1969 The United States lost its innocence, or at least grew up. Neil Armstrong took the first walk on the moon. In New York, homosexuality burst out of the proverbial closet in the Stonewall riot, marking the beginning of the gay rights movement. The worshipped Kennedy family took a black eye when Sen. Edward M. Kennedy pleaded guilty to leaving the scene of a fatal accident in which his mistress drowned in Chappaquiddick, Massachusetts and did not report it until the next day. U.S. citizens began to question the U.S. government's action in Vietnam with the news release of U.S. soldiers massacring civilians at My Lai. Hollywood, for their part, released such mature films as Midnight Cowboy and The Wild Bunch.

The Wild Bunch is noted for the blood and action but there is also frank discussions about sex. Dutch brags that he and Tector, "...were matching whores... in tandem!" Tector clarifies, "That's one behind t'other." Angel kills a former girlfriend after discovery she has become a prostitute, or as he calls her, "Punta!" Later they demand some women and end up bathing in a vat of wine with them. One of the men is a real charmer, saying to one whore, "Come on. Let me see yer titties." The Wild Bunch features several brief nudes scenes that by today's standards are mild, but in 1969 were quite titillating.

Scott was put off by the length of the film, while I was annoyed by the editing. Reportedly, the original version had 3,643 editorial cuts, which was the most of any film up to that point. It is most noticeable in the action scenes. In the opening robbery, we see someone start to fall through a glass window, it then cuts to someone getting shot and then goes back to the window being crashed through. It makes an already frantic scene more jarring than exciting to watch.

As Patrick noted, The Wild Bunch was very groundbreaking. The characters swear throughout but "Fuck" had not become commonly spoken in film yet. "Bastard" is the word of choice here, as in the oft repeated line, "You crazy bastards!" During the train robbery, note the youthful ages of the soldiers on the train. Was Peckinpah not making a statement about the Vietnam War? Though it set new standards, The Wild Bunch remains very much of its time.