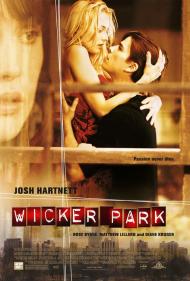 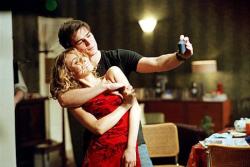 Wicker Park is a stylish mystery love story told in the present with intermingled flashbacks that help unravel the storyline. While there are some coincidences and plot points that stretch credulity to nearly the breaking point, it manages to hold itself together enough to be an enjoyable film.

Josh Hartnett, one of today's most over rated actors who seems to have carved out a career based on looks alone, stars as Matthew, a young man on the verge of marriage and a promotion at the ad agency where he works for his fiancée's brother. On the eve of a business trip to China, he thinks he catches sight of Lisa (Kruger), the woman he was in love with two years earlier, but who disappeared without a word of explanation shortly after he asked her to move in with him. Secretly bailing out of his trip, he enlists an old friend (Matthew Lillard in a fairly normal role for once) to help him discover if the woman he saw really was his lost love.

The story is told with some fancy editing that blends the past with the present so that the story of Matthew and Lisa's first meeting is told as he follows a string of clues to the woman he saw in the bar. However, when he finally arrives at her apartment, it seems that things are not as clear-cut as he thought they would be.

Visually, this movie is beautiful to watch. The scenes of a snow draped Chicago – even if some of them are actually a snow draped Montreal – are artfully used. Director Paul McGuigan has an eye for the artistic shot, making good use of camera movements to emphasize the scene. If only the story was as strong as the visuals.

Underneath all the flash, the story is fairly simple. Unfortunately, it is also too dependent upon coincidences and the occasional weak plot point. The reason for Lisa's unexpected disappearance is the weakest moment, but there are several scattered throughout the story, that while they don't destroy it, do weaken it.

The cast all does a good job, even Hartnett, but the standout is Rose Byrne as Alex. Of all the characters, hers is the most complex and the most oddly sympathetic. In an ironic side note, Byrne and Kruger each last appeared onscreen in Troy.

Although Wicker Park has been unfavorably compared to the original French version of this story, I have to say as someone who never saw the original, that I found this one to be enjoyable, not perfect by any means, but as a last weekend of summer release, it's far better than you might expect. 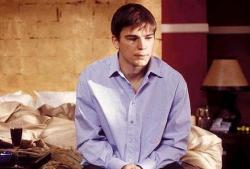 It's better than you might have expected Scott, but it was not as good as I had hoped. The coincidences are just too implausible to be taken seriously. Guy#1 is dating girl #1 who is secretly in love with guy#1's best friend, guy #2. Guy #2 doesn't even know that girl#1 exists. Guy #2 is pining for a girl#2, who unbeknownst to guy#2, is girl#1's roommate.

Sure, it's a tangled web, but the movie plays out like a murder mystery or a spy thriller. I would have preferred a more exciting discovery, like Lisa was a secret agent undercover or some such nonsense. By the end of the movie you realize that the big conflict in the film is that no one communicated very well or even thought to pick up a phone.

I agree with Scott's assessment on Hartnett. Why can't this guy ever star in a great movie? He can act and has presence but his choice of films are too often off.