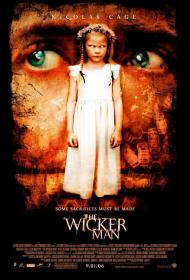 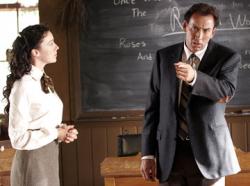 Nicolas Cage in The Wicker Man.

I never saw the original 1973, The Wicker Man, but apparently it has something of a cult following and appears on many best British Movies of All Time, lists. It's a sure bet however, that this 2006 remake won't ever appear on any list with the word Best in the title. This movie is so bad it's almost a comedy. Nicolas Cage is at his over the top worst here and the plot is a joke, with Cage's character being the world's worst detective ever.

Cage plays Edward Maulis, a California Police Officer. After an accident on the highway that results in the death of a mother and small daughter, to which he is a witness, he receives a letter from his ex-fiancée, Willow, asking for his help in locating her missing daughter. Willow lives on an island off of the Oregon coast in a commune of sorts. Edward hitches a ride out there and discovers it's a very odd place indeed. It's a matriarchal society living as if it were still the 1800s. At first everyone except Willow denies the existence of Willow's daughter Rowan, but when Edward stumbles across the attendance record at the schoolhouse and finds Rowan's name, everyone changes their story and says that Rowan did exist, but died in a fire. Edward stumbles on through his investigation, eventually arriving by the end of the movie to the same realizations that any savvy movie-goer will have seen after about ten minutes. This leads to the "twist" ending and the epilogue, both of which make no sense or stand up to even the slightest scrutiny.

The reason it takes Edward so long to catch on is that he is the worst detective in the history of movies. This isn't a plot point because in the movie he's supposed to be pretty sharp, only the audience can see that he, or at least the screenwriter is an idiot. He never asks any of the right questions and just accepts too many things. When he first meets Willow for instance, she says to him. "I can't talk right now. I'm being watched." Now me, I would have immediately asked, "Why are you being watched? And by whom?" He just accepts it. When everyone suddenly admits that, "Oh yeah, Rowan did exist." He doesn't press the point by saying, "Well then why the fuck did you all say that she didn't?" And in one of the movie's most bizarre scenes, Edward finds a naked girl sitting in a chair covered in bees (the island's main crop is honey). Instead of saying something like, I don't know, "Hey naked girl, why are you covered in bees?" he just closes the door and moves on to the next room. After about twenty minutes on the island, I would have been stealing a boat to get the fuck off it and only have come back with the police, the FBI and maybe the military.

Another of the many points that makes no sense is the men on the island. It is easy to see why the woman stay since they are the rulers of the roost and the men are just servants and laborers. But why do the men stay? Why would they willingly remain on this island that isn't that far off of the mainland? How do the women keep them there? That's just one of the many things left unexplained.

I won't give the ending away except to say that it is hilarious. This is unintentional of course, but funny, nonetheless. Just picture Nicolas Cage fighting off a bunch of flower-power women while wearing a bear costume and trying to earn the Razzie for the most overacting in a movie award at the same time. And even when he takes the costume off, he leaves the bear feet on, so that when he starts kicking people, he keeps the joke going.

There's so much more I could say about this movie, but it would involve revealing more of the plot's "secrets". And if you still some how want to see this movie, I'll at least leave you that. Just don't say I didn't warn you. 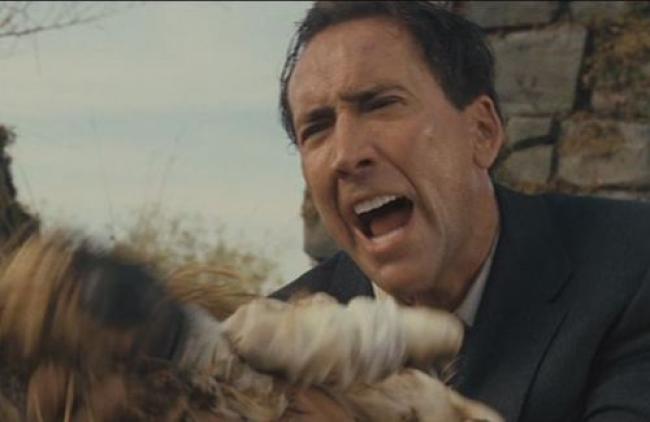 Nicolas Cage really wants to know how it got burned in The Wicker Man.

The Wicker Man could have, and most certainly should have, been told in five minutes. Skip the car accident scene altogether and begin with Edward getting the note from his former fiance, asking for his help on a remote island. He goes there and one of the first things he does is have a drink provided by one of the creepy women. Instead of showing all of his pointless investigation, that is made completely moot by the twist, the story would have made more sense if it turned out that drink was laced with some type of drug that knocked him unconscious and then have him wake up in the final scene. Nothing in between that drink and the final scene makes any sense or serve any purpose what-so-ever anyway.

The only real piece of interest this story held for me was the arrangement of this society but the movie only gives hints. Scott asked about the men and why they simply do not escape. The movie makes some hideous suggestions. None of the men talk and it is implied that they no longer can. They also all seem mentally handicapped. We are shown a surgical table that could be used for delivering babies or removing boy's tongues and given lobotomies. These men are kept around for labor and their semen. Makes you wonder how the women use that as motivation? "The hardest workers get laid." Check out Sister Summersisle's blinded old sex slave.

The only real way to possibly enjoy this movie is to laugh at it. The writing and acting are so bad as to almost be unbelievable and, as Scott noted, Edward is the lousiest detective who ever appeared on screen. Frank Drebin could have done a better job. Cage horribly delivers some God awful dialogue. "Killing me won't bring back your goddam honey!", "Step away from the bike.", "What!" My absolute favorite moment of his is when he finally discovers what happened and the dire situation he is in. All it elicits is a, "God Damn it!" The funniest, and most disturbing scene is when the teacher asks the classroom full of young girls to,, "...tell us what man represents in his purest form?" and the entire group of girls chant, "Phallic symbol! Phallic symbol!"

In Edward's defense, the women shouldn't even try to kill him, just keep him around to work. He has already proven to be half brain dead yet fertile. Just remove his tongue so we no longer have to hear him ask such inane questions as, "Didn't we just talk?" or "What's in the bag? A shark, or something?" or "HOW'D IT GET BURNED?"

The Wicker Man is a 90 minute, unintended joke.