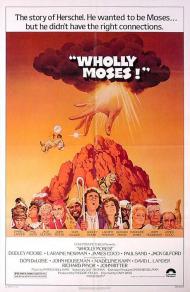 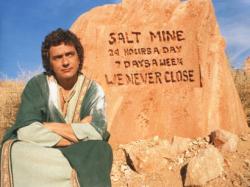 Wholly Moses wants to be to the Old Testament what Monty Python's Life of Brian is to the New. However, despite some funny moments, it never approaches the heights of heavenly hilarity of the Gospel according to Monty Python.

Dudley Moore stars as Herschel, a contemporary of Moses. Like him, Herschel was set adrift in a basket, but instead of being found by the Pharaoh’s daughter, he is picked up by a family of idol makers. When he overhears the burning bush speaking to Moses, he mistakenly believes it to be speaking to him and so sets out to free the slaves of Egypt. Along the way, the film parodies such bible stories as Sodom and Gomorrah and David and Goliath, among others.

The film is filled with a large cast of character actors of the period, most of whom would go unrecognized by someone watching the film for the first time today, unless they'd lived through the 1970s. The biggest guest star is Richard Pryor as the adult Pharaoh, who has a small, mildly amusing scene. The always reliable Madeline Kahn also has a small part, but even she is unable to do much with her short scene. Laraine Newman plays the female lead opposite Moore and if anything could be greater evidence of the 1970s, I'm not sure what that would be. Of the original cast of Saturday Night Live, her's was the least successful career.

Director Gary Weis worked as a director on Saturday Night Live and this film in many ways feels like a series of sketches from that show. Some of them work and some of them don't. Each of the scenes contain a few laughs, but often they go on a little long. The film tends to move from scene to scene, introducing a new guest star in each. The casting director seems to have been the hardest working person of the production.

Although it's of a rather low quality and many of the jokes don't work, quite a few of them do. This was a movie I saw many times as child. HBO of the early 1980s seemed to have a limited number of movies to show and this one was featured heavily in its rotation. My 12 year old self found it very funny. Even now, some 30 years later, I still found it tolerably amusing. Not every joke works, but there are so many of them that the ratio of good to bad jokes means that when you're groaning at one, you'll be laughing at another one before long.

Upon its release, Life of Brian was protested by religious groups as heresy. Wholly Moses is silly and lowbrow enough that it never generated equal controversy. It's in every way inferior to that other film, but silly enough to provide a few cheap laughs. 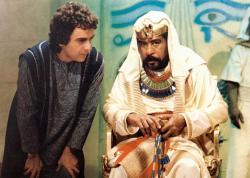 To be fair some of the jokes hold up better than others. James Coco is quite good as Herschel's father. I laughed when he seasoned his food by rubbing a bit off of Zerelda who, like Lot's wife, had been turned into a pillar of salt. And I have always found Paul Sand's uncertain stammering quite amusing. John Ritter has one scene as Satan. He complains about the fact that he gets no credit for his help in Creation. He tells Herschel that “trees” were his idea but what can you do?

Laraine Newman may be practically forgotten today but she does provide a few of the best moments. Harvey, in what was then present day Israel, is reading from the scroll he and Zoey have discovered. He intermittently narrates the entire flashback story. When he comes to the part where Herschel and Zerelda are about to go on a journey the scroll reads, “He set his wife upon her ass.” meaning her donkey of course. And after Herschel hears the Voice of God on the mountain he begins doing an impression of the Supreme Being. Zerelda, speaking to the other sheep herders and beaming with pride, says, “Hey everyone. My husband is going to do God now. He just met him. He's doing God.”

Just how dated is Wholly Moses!? Well among its numerous cameos is one by David L. Lander, better known as Squiggy from Laverne & Shirley. He plays a beggar who fakes being blind and lame until Herschel miraculously “heals” him. It's a mildly amusing skit. Some of the cameos don't work at all. Both Madeline Kahn and Richard Pryor are wasted in brief unfunny bits.

The idea behind Wholly Moses! contained potential but it would have taken an Act of God to make this movie a hit. 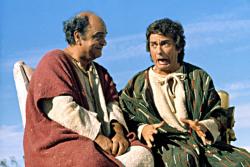 We adored Wholly Moses! when we were young. My brothers and I loved the scene where the slave driver gets the giant brick pulled onto his foot because of Herschel. The poor man looks up at Herschel and says through gritted teeth, “Squashed foot.” We would imitate him and laugh.

This time around my favorite parts were the scenes set in 1980. There are some nice little subtle jokes. When boarding the tourists onto the bus and listening to their mundane questions, the tour guide says quietly to himself, “Where did I go wrong?” The tour guide asks the people on the bus to introduce themselves to the other passengers. Harvey meets Zoey and begins telling her about his personal problems. She is clearly not interested in him. One young man, carrying a fig tree, says he is going to plant it in his grandparent’s name. Later, when exiting the bus, Harvey picks a fig from his tree.

Wholly Moses! is a farce about a man who has religious faith, loses it and then takes a journey to find it once again. That alone tells you how dated this film is. Name the last time a star studded Hollywood film praised Christianity, even through laughter? Other than a few, most of the cameo appearances are by long forgotten celebrities. Although I enjoyed seeing this film again after so many years, Wholly Moses! was definitely funnier in 1980.