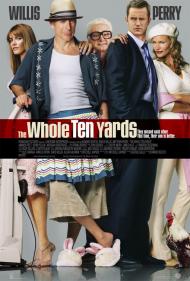 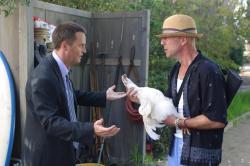 Matthew Perry and Bruce Willis in The Whole Ten Yards.

The Whole Nine Yards was a quirky little off beat comedy featuring a group of actors who were obviously having a good time making a funny movie together. In its sequel; The Whole Ten Yards, the same group of actors (mostly) seem to be having just as much fun working together, but its much less fun for the audience this time around. While there are a few funny moments and its nice to see what happened to these characters, much of the movie makes little sense and where as Bruce Willis played the straight man to Perry's comedian the first time around, this time they're both playing it for laughs, leaving Amanda Peet to hold the bag as the straight person.

For those who didn't see the original, Mathew Perry played Oz; a dentist, who gets mixed up in a mob war when hitman, Jimmy the Tulip (Willis), moves in next door to him. By the end of the film, Oz and Jimmy are friends who share in a large sum of money from Jimmy's life insurance policy after they fake Jimmy's death, using the dead body of mobster Janni Gogolak (Pollak), properly doctored with Oz's dental skills to match Jimmy's dental records, as a stand in for Jimmy's body.

This time around, we find Jimmy living in Mexico with Oz's former dental assistant/hitwoman, Jill (Peet). Oz is now married to Jimmy's ex-wife Cynthia and is living in California. Trouble returns when Janni's father Lazlo (also played by Pollak) is released from prison and comes looking for Jimmy, whom he guesses is still alive. He kidnaps Oz's wife, knowing that Oz will run to Jimmy for help. And the plot is off and running.

The bright moments in the movie come when Willis and Perry are bantering back and forth. Their drunken scene in the bar together is the highlight of the movie. Fortunately, for the audience, they share a chemistry together that can somewhat cover weak material. However, as I mentioned, their on-screen pairing is weakened by the loss of Willis's edge and his attempts to be as funny as Perry. In the first film, it was Jimmy's killer playing off of Oz's bumbling personality that made it work. Here, for no good reason, Jimmy pretends to be insane for a while, which produces some weak laughs, but not the sustained enjoyment of the first film.

Sequels, as a rule, are generally weaker than the original. When you start with a good, but not great, comedy like The Whole Nine Yards, you really only have one direction to go, and it's not up. Unless you are a die-hard fan of the original, you'll find little to enjoy here, and if you are a fan of the original, there's nothing here that can't wait until the DVD.