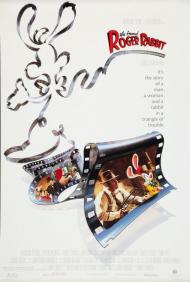 The real joy is in scenes like this where you see Mickey Mouse and Bugs Bunny together for the first (and only) time.

This is one of those movies that I remembered as being much better than it actually is. When it was released in 1988 it was a sensation that I and seemingly just about everybody else loved. Watching it today though, apart from the interesting premise and the novelty of seeing so many famous cartoon characters together on the screen, I was overall disappointed and it completely failed to live up to my memory.

The plot is a cross between Chinatown and a Loony Toons cartoon with the gimmick of the movie being that cartoon characters are real and are known as Toons. Bob Hoskins plays Eddie Valiant, a Private Eye in 1947 Hollywood whose partner/brother was murdered by a Toon. Eddie is hired by R.K. Maroon, the head of Maroon Studios, to spy on Jessica Rabbit, wife of Maroon's biggest star Roger Rabbit, whom R.K. suspects is cheating on Roger and distracting him from his performances. Like the hard-boiled detective stories of the 1940s that it is emulating the mystery to the movie begins from that simple beginning but quickly becomes much more complex.

The real joy of the movie is in the Toons. Spielberg was executive-producer of the movie and he was able to obtain the rights to almost every animated character from the Golden-Age of Animation (with the notable exceptions of Popeye and Tom and Jerry). Seeing the different Toons together creates some of the best moments in the movie. Bugs Bunny and Mickey Mouse appear together, as do Daffy and Donald Duck. A monochromatic Betty Boop has a funny cameo, her career went downhill when cartoons went to color. If you watch the background scenes you will see dozens of famous cartoon characters that you will recognize from Disney, Warner Bros. and others.

I only wish the Toons had been the main characters. I wanted to see more of them, but instead Hoskins has the lead. Hoskin is a great character actor, but he's not the most charismatic of men. Along with Hoskins of course you have Roger Rabbit, who is funny, but is again second-fiddle to Hoskins. The sexy Jessica Rabbit is perhaps the most iconic character from the movie, but her part is very small. Another original cartoon character is Baby Herman. His part is tiny, but he makes the most of his few scenes.

What surprised me most while watching this for the first time in years is just how much it wasn't funny. A great many references in the movie are aimed at adults, but too much of the humor is aimed at kids and involves far too much slapstick. I know it's in reference to the slapstick in the old cartoons of the era, but it fails to live up to the originality in so many of those old cartoons.

I think one of the big reasons for this movie's success at the time was the amazement at seeing not only so many old favorite cartoon characters but also at seeing the amazing technical skill the filmmakers employed in bringing this movie to life. Now of course, it would be child's play for a skilled team of computer animators to accomplish the same effects. I do have to say though that the movie does still look good. The greatest technical achievement in the movie is the way the animation interacts with reality. The Toons don't just appear on the screen next to live actors, they actively interact in a convincing (most of the time) manner.

It's funny how time can change your opinion of a movie. Before re-watching this I would have sworn it would get 4 stars from me. I guess I'd forgotten just how much it was aimed at kids.

I still enjoyed this movie all these years later, but I too viewed it from a different perspective. The movie works almost every time the toons interact with humans. The best scenes being when Roger or Jessica spend time with Eddie. My favorite toon is the New York taxi. “Sister Mary Frances! What the hell happened in here?” Even small cameos such as the dueling ducks, the Frank Sinatra singing sword, and Dumbo are worth a chuckle.

With that said, I agree with Scott in that any time Hoskins is on screen without a toon the movie drags. Too much time is spent on his depression. My oldest son said to me, “He drinks in every scene.” One brief line of Eddie saying he does not work for toons because his brother was killed by one, could have replaced several boring scenes. The next time Hoskins would work with Spielberg would be in Hook, in which he is reduced to a supporting role.

Like Scott, I noticed just how many adult jokes this movie contains. When Eddie is about to take a picture of Acme and Jessica, it implies they are having sex. When Eddie sneaks Roger into the diner, Dolores says, “Is that a rabbit in your pocket, or are you just happy to see me?” Baby Herman slaps a woman on her butt and then explains to Eddie that his problem is that, “I have a 50 year old lust and a 3 year old dinky.”

Who Framed Roger Rabbit fails in the worst way. It has not become timeless. I still see little girls with Little Mermaid beach accessories. The Beauty and the Beast Broadway touring company is currently in town for a weeks performance. The only legacy Roger Rabbit left is that for a brief time, some Disney movies featured a Roger Rabbit cartoon before a few of their features. Showing a cartoon before a movie was traditional decades ago, but Roger Rabbit was the first to bring it back. Perhaps they influenced Pixar, who proudly show a animated short before all of their feature films. 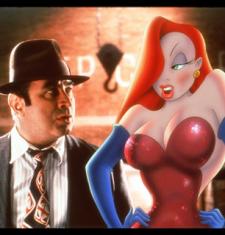 Scott rarely have I disagreed with you more about a movie. Who Framed Roger Rabbit is most certainly not aimed at young kids. This one is definitely for the 12 and over set. You were 19 when you first saw it and loved it. The beauty of the movie is that it places cartoons into a “real” adult world. As Eric pointed out there are many sexually suggestive moments (check out Jessica Rabbit’s booby trap) and the plot is too intricate for most young children to follow. I didn’t notice an overabundance of slapstick and found most of what there was to be quite clever. And the dialogue is pretty darn good too. The most famous line being when Jessica quips, “I’m not bad. I’m just drawn that way.”

Eric, I disagree with you as well. Bob Hoskins has very little screen time that is completely toonless. And the back-story with his brother is more than just “he was killed by a toon”. As Roger tells Eddie, “Every toon knows when you’re in trouble you go to Valiant and Valiant.” Eddie and his brother were heroes to the toons. Through Roger Eddie heals and learns to laugh and love toons again, and therefore life. And even the so-called depressing scene includes the newspaper headline “Goofy Cleared of Spy Charges”.

Which brings me back to Scott. How you can possibly say that this movie isn’t funny is beyond me. The photos of Jessica playing paddy cake with Marvin Acme are hilarious. Roger’s scene in the theater with Eddie is both funny and touching. The cameos by all the classic characters are funny. But the original characters steal the movie. Roger, Jessica and Baby Herman are three brilliant creations. And Scott Jessica Rabbit and Baby Herman have bigger parts than you make it sound. They are both very much integral to the plot.

Eric, Who Framed Roger Rabbit is not a children’s movie. To compare it to The Little Mermaid and Beauty and the Beast is pointless. This is a film noir with cartoons. But it is much more than just an original concept. The execution is nearly flawless. The details in both the real cinematography and the animation are impressive. 1940’s Hollywood is faithfully recreated. Did you notice the one-armed WWII veteran in one of the bar scenes? Take out the toons and this could be a real 1940’s plot. And the essential ingredient is how the actors play it so straight. And am I the only one who thought Bob Hoskins was doing a damn good Jack Klugman? 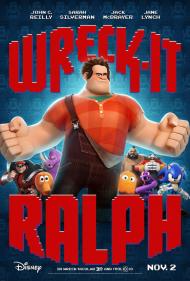