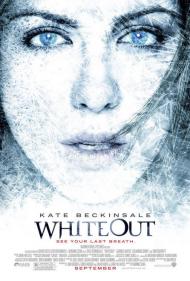 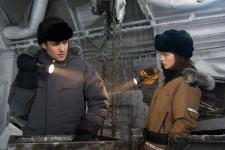 Gabriel Macht and Kate Beckinsale trying to shed some light on a very light mystery.

Whiteout is one of those movies where the setting dominates all other aspects of the film. In the antarctic, a beautiful cop has to deal with a murder and several suspects, but all you will remember is the snow and scenery. If that is what interests you then rent March of the Penguins. If you want a decent murder mystery, rent anything else.

Carries is an police officer stationed at an antarctic science station. Just before the facility is about to shut down for the winter, a body is discovered out in the middle of nowhere. Her and her doctor friend, John, assume the body fell from a nearby cliff. Obviously it fell from a plane, but I guess that explains why she was sent to work there. Any decent detective would be needed elsewhere.

A masked man attacks her and the body count starts adding up. An FBI agent mysteriously shows up. She learns of a discovery out in the ice, that we the audience knew of since the opening scene. She also finds herself surrounded by several men, of whom she does not know who to trust.

The mystery story line is worthy of Scooby Doo. It all comes down to someone wanting to scare away and kill others so they can get something for themselves. As with Scooby Doo, you can see the guilty party long before Carrie. Just before the bad guy gets it, I pictured him saying, "...and I would have gotten away with it too, if it wasn't for you meddling cop."

The movie opens with an intriguing action scene. There is death, mayhem and unanswered questions. It creates a need for the audience to want to watch more. It is a good setup, reminiscent of a James Bond movie opening. However, it goes down hill after that.

The next scene is Carrie coming back to the frozen base. It looks more like a college campus during rush week. She passes some guys streaking through the snow. A band is setting up their instruments. Some people are decorating for a party, and lots of alcohol is being passed around. Carrie then takes a shower. She has one of those Hollywood glass showers that fogs up in just the right places to provide privacy. Full frontal male nudity is okay, but not female? What's up with that?

The snow and whiteout conditions are used in several actions scenes to attempt to add tension. During the high winds they have to maneuver between buildings by latching themselves to ropes so they do not blow away. At one point Carrie maims herself because of the low temperatures. John has a scene where he has several guys standing outside, with their jackets off, to teach them about the dangers of the freezing temperatures. They are still fully dressed in sweaters and hats but are still freezing. Why are they about to die from hypothermia, but the streakers are fine? I guess this is one of those movies where it is best not to ask too many questions.