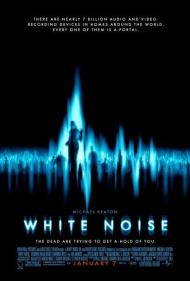 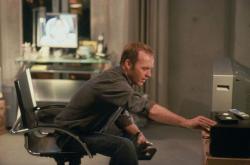 The white noise you hear during this movie isn't the creepy voice of the dead; it's the sound of the audience snoring as one by one they all drift off to sleep to this snoozer of a movie masquerading as a horror film. When I see a movie like this, I know that it can only mean one thing; it's January and the studios are dumping their rejects into theaters.

Michael Keaton, whose career certainly isn't what it used to be, stars as Jonathan; a man who loses his wife to what seems to be an accident (I say seems to be, although it's such an implausible accident that it's hard see why anyone in the movie thinks it is). Shortly following his wife's death, a stranger approaches him claiming that he has a message from her, but Jonathan dismisses him as a kook. Finally, nearly 45 minutes into the movie, Jonathan starts to suspect the guy might have been on to something and goes to see him. That's right, it takes nearly half the movie for the "horror" to start. You might think the movie is slowly building suspense for what is to come, but even if you haven't seen the previews for this movie, which tell you what's going to happen, a caption at the beginning of the film explains about the process used in the movie to communicate with the dead, so you know it's coming.

Eventually, Jonathan becomes obsessed with the idea of communicating with his dead wife and comes to believe that she is sending him messages about how to help people. It turns out that some of the messages Jonathan is receiving aren't even from dead people, but people who are about to die. Just how this is possible is (of course) never explained. And since over the course of the story this information connects him to several dead bodies, you might suspect that the police might want to talk to him and ask him why and how he was at the scene of so many deaths, but the detective seems content to tell him that he'll, '…drop by sometime and get a statement.' Apparently, even the police can't be bothered to take an interest in what's happening.

Here and there, scattered throughout, the movie does contain a few 'jump' moments, but only the bare minimum required to qualify it as a horror movie and you can see all of them coming simply by the music and the camera angle. There are certainly not enough of them to keep you awake.

The movie is so slowly paced and unexciting that by the time it winds to its conclusion you will have lost all interest in knowing how it will end. Somewhere buried deep, deep, deep down in this movie, there might have been the seed of a good idea, but it is so poorly executed that we'll never know.