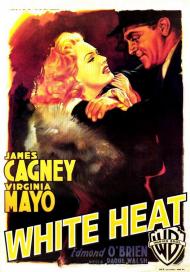 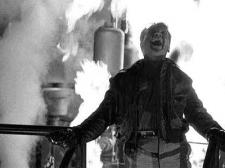 Made it Ma! Top of the world!

White Heat marked James Cagney's return to the gangster genre after a ten year period during which he had tried his hand at playing the hero. Movie fans were hungry to see him get back in the gangster saddle, so to speak, and White Heat became one of his biggest box-office hits. As Cody Jarrett, Cagney painted a chilling portrait of a mentally disturbed psychopath with a mother fixation. The final scene of this fast-paced thriller is one of the most famous moments in movie history. 'Made it Ma! Top of the world!!'

Cody Jarrett is a cold-blooded killer prone to brain splitting migraines that only his mother can soothe. After a particularly brutal train hold-up Cody takes the rap for a lesser crime in order to avoid the more serious charge of murder. The feds send in an undercover cop to befriend him while in prison in order to gather evidence against him that will lead to the electric chair. Meanwhile Cody's wife (Virginia Mayo) is playing hide-the-salami with Cody's right hand man, Big Ed (Steve Cochran).

In one of the most electrifying scenes of Cagney's career, he learns about his mother's death while eating a meal in the prison mess hall. He goes berserk and knocks out several guards before being overpowered and carried kicking and screaming from the room. He later manages to escape, taking the undercover cop with him. This leads to the final climactic showdown at a chemical plant, where Cody learns that his cellmate is really a 'copper'. This pushes the already unstable killer over the edge. As the undercover cop later remarks, 'He finally made it to the top of the world, and it blew up right in his face.'

Virginia Mayo is great as the trashy moll and Margaret Wycherly is superb as Ma Jarrett, but it is Cagney in his most ferociously sadistic role that steals the show. At one point he has a fellow prisoner, who tried to kill Cody in prison, locked up in the trunk of his car. The guy complains about needing some air. Cagney/Cody pulls out his gun and nonchalantly blasts a few rounds straight into the trunk, all the while calmly chewing on a piece of chicken.

As a time capsule this movie is amusing. Check out the, then high-tech, police surveillance equipment. Regardless of these dated trappings, Cagney's brutal performance keeps White Heat timeless. 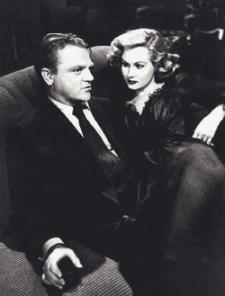 James Cagney was clearly getting pudgy at this point in his life. He was well over middle age. This all just adds to the depth of his character. If a younger guy had played the role, Cody Jarrett would have appeared simply as naive and inexperienced. Cagney’s maturity makes Cody appear all the more crazy.

This is quite an adult film for 1949. Many people get killed and Cody is quite violently insane. It also has quite a few sexual wink, wink, nudge, nudge lines. Early on, Ma Jarrett tells Verna to quit wearing out the mattress. She ends up falling for a guy nicknamed “Big Ed.” Cagney tries, unconvincingly, to explain that his nickname, supposedly, comes from his big ideas. Yeah right! The undercover policeman says he is sneaking off to see his wife because he has not seen her in a while and he is only human, ya-know. Mayo, who is one hot broad, plays a woman who, the movie hints, use to be a prostitute.

I also thought the police devices were quite interesting in a historical way. However, the greatest thing about this movie is James Cagney. He could act larger than life without ever overacting. He delivered his lines with steely reassurance, “How do you like that? A cop-er!” Many contemporary actors have been compared to many older movie stars, but there has never been, and probably never will be, another James Cagney. 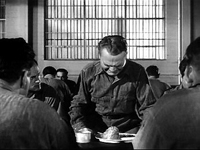 Cagney is perfect, but the movie is not.

The image of Cody Jarrett on top of the chemical tank is definitely iconic and Cagney's portrayal of the cocky gangster is menacing and well done. He's one of those stars who after seeing them in a movie you have the urge to do an imitation of them, like John Wayne or Jimmy Stewart.

What surprised me most when watching this movie is that the police have more lines than Cagney does. Although he dominates the screen when he's on there, there are actually too many scenes where he isn't and too many of them aren't needed. Eric and Patrick, you both mentioned the old police technology and yeah, it's kind interesting in a laughable way ("We'll be using the A-B-C following method"), but they should have trimmed those scenes. Cagney is the real draw here and we want to see more of him.

There's also an awful lot of melodrama that at times makes the movie unintentionally funny. I think that's why I can enjoy old comedies and musicals more than I can enjoy old dramas or action movies from this era.

Cagney is perfect, but I felt the movie had a few problems that weakened it, not so much that I didn't enjoy it, but enough that I felt there was room for improvement.