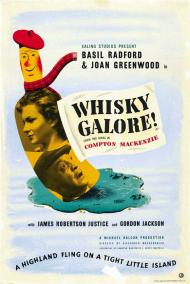 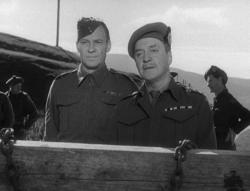 This early Ealing Comedy is a mildly amusing little affair. Set during World War II, it tells the story of an isolated Scottish island where a ship carrying a cargo of whiskey runs aground. The local inhabitants, who have been deprived of alcohol because of wartime rationing, quickly clean out the ship's supply and then must hide it from the authorities. It's based on a true event from 1941 when the SS Politician ran aground carrying a similar cargo and with similar results.

Released in 1949, the film resonated with British audiences still dealing with rationing four years after the end of the war. The Scottish islanders outwitting the authorities must have made for great escapist entertainment. Surprisingly for a small English comedy, it also played well in the USA, although its title had to be changed to Tight Little Island since an obscure regulation of the time prohibited the name of alcohol in movie titles. The ending was also altered for the American release, due to the stipulation by the Hays Code that no film where a crime is committed can end with the criminals profiting by it.

The cast is comprised of mostly unrecognizable character actors, with local islanders portraying the extras. The most famous face, at least to American audiences, is a young Gordon Jackson, who you may recognize from The Great Escape or Upstairs Downstairs. Here he plays a young, engaged man who is completely dominated by his overbearing mother. That is until he gets his hands on some of the whiskey.

One of the funniest running jokes in the film is how depressed the islanders get without any alcohol. One old timer literally finds nothing left to live for when the whiskey runs out. Later, when the contraband whiskey becomes available, the entire island's spirits rise, causing one sick old man to even be able to rise out of his bed. In a very dated scene, that same sick old man is given a pipe and tobacco from his doctor, for his own good. As one islander points out, in the original Gaelic whiskey was translated as "the water of life".

Basil Radford plays the English Captain on the island, in charge of organizing the local Home Guard. As the representative of authority, he is the butt of much of the humor, although he's more bumbling and officious than the true villain of the story.

The film was shot on location and there are some beautiful shots of the island and the water that would have been even more beautiful had they been shot in color. Although apparently the weather was so awful during filming that the production ran many weeks over schedule.

At less than 80 minutes, this little comedy moves quite quickly. It won't have you exactly rolling on the floor, but it will put a smile on your face. 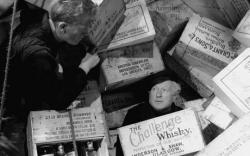 Gordon Jackson, Morland Graham and many cases of whiskey in Whiskey Galore!

Yes, this charming little comedy will definitely put a smile on your face. Especially if, like myself, you are inclined to imbibe an alcoholic beverage every now and again. It has a simple plot and the jokes are mostly of the chuckle inducing variety rather than guffaw producing. I did laugh out loud when the men attempt to sneak up behind the soldier stationed on shore to guard the soon to sink ship holding the priceless whiskey. He easily catches them but then to their surprise he instructs them in the proper way to do the “Panther Crawl” before turning his back and letting them overpower him.

Whiskey Galore! marked the directorial debut of Alexander Mackendrick. He would go on to direct such classics as The Ladykillers and the American production Sweet Smell of Success. And though he would later call his work on this film amateurish, I think he was being a bit harsh on himself. The pacing, editing and camera work are all adequate if not spectacular.

The movie starts with a narrator setting the scene. He begins by describing the geographical location of the island in the Outer Hebrides on which the story takes place. At one point he explains, “To the west, there is nothing... (pause) Except America.”

In one scene the islanders stop their attempt to salvage the whiskey from the wrecked ship because it has just struck midnight on Saturday night and they cannot do work on the Sabbath. In the original novel on which this movie is based the islanders are both Catholics and Calvinists. This was changed for the movie since Catholics would have had no problem with breaking the Sabbath.

Mackendrick, who was born and raised in Glasgow, made this humorous observation about these characters, “I began to realize that the most Scottish character in Whisky Galore! is Waggett the Englishman. He is the only Calvinist, puritan figure - and all the other characters aren't Scots at all: they're Irish!”

This B&W picture from Ealing Studios is both a charming little comedy as well as a challenging drinking game. Try taking a sip of your preferred alcoholic beverage every time someone in the movie says the word "Whiskey". But be forewarned. You may not be conscious by the time the words The End appear on the screen. 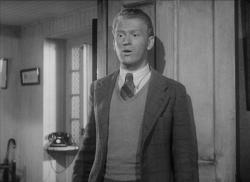 “There is no whiskey.” Are the first words spoken and the response from the bored drunk male populace of this island is hysterical.  The narrator states that, “Life without it is not worth living.” And as Scott mentioned, one old timer agreed. One child recites a poem he wrote in class that includes the line, “When there is no whiskey they are very sad.”

The news of the 50,000 cases of whiskey on board the damaged ship spreads faster than news of war. The problem being that it is a Sunday and the men cannot work to get the whiskey because of their faith. As Patrick mentioned, these men are truer to their God's laws than mans, when it comes to alcohol.

Captain Paul Waggett runs into trouble when he tries to get in contact with George on a Sunday. George’s mother refuses to allow Waggett to speak to George. Waggett attempts to make a point to Mrs. Campbell that the Germans do not stop to fight on the Sabbath, but she makes the rebuttal, “What the Germans do, Mr. Waggett, is on their own conscience, and Toddy is not in North Africa, so there's no need to bring the heathens into it.”

The Scottish born Gordon Jackson was the first actor I recognized. The second wasJames Robertson Justice from The Guns of Navarone (1961). I enjoyed Jackson's portrayal of mama’s boy George. The best line in the film is when the doctor describes George as being born two drinks below par. Apparently, the amount of whiskey he consumes to get drunk is less than what it takes most.

As my brothers wrote, Whiskey Galore! is good for some laughs and as Patrick noted, it helps if you are someone who likes to drink. According to WIKI, a remake was briefly in the works some ten years ago and I think one could work. The subject matter could be depicted in a more mature manner and those glorious Scottish hills would be in color, as long as the weather permitted.