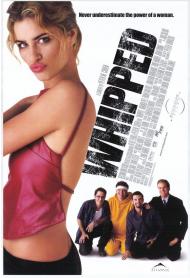 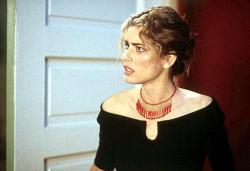 As my brother Eric is so fond of pointing out, likable characters, or at least characters you can empathize with, are one of the most important aspects of any movie. A point that is totally lost on Peter M. Cohen, the writer, director, and producer of the new comedy Whipped.

J.D. Salinger once said, through the character of Holden Caulfield, that he knew he'd read a great book if once he was done reading it, he wanted to call up the author and talk to him. I feel the same way about movies, only I'd like to meet and get to know the characters in the movie. If I met any of the people in this movie, I'd turn and run the other way.

Whipped is funny. It has moments of real hilarity. It's pacing is good, it moves along at a nice clip. I liked the way the scenes are interspersed with moments of the characters talking to the camera, revealing things about themselves. But since I didn't give a damn about any of the them, I never once got 'inside' this movie.

Whipped tells the story of four guys who meet every Sunday at a diner to share stories about women they've 'scammed' during the week. 'Scammed' meaning in this movie, getting them into bed. Until a seeming coincidence occurs and three of them end up dating the same woman(Amanda Peet). She claims that she can't decide between the three of them and ends up stringing them along.

The characters are all well defined, but fit easily into stereotypes. Brad is the Upper East Side Wall Street shark who thinks he is god's gift to women. Zeke is the East Village artist type who knows he's god's gift to women. Jonathan is the shy, introverted one who is supposed to be the 'nice' guy. And Eric is the married friend who feels left out and wants back into the group so he can live vicariously through the others.

Finally, there is Amanda Peet's character Mia. She plays the object of all the guys affection. And this presents one of the most misleading things about this movie. If you watch the previews or look at the movie poster, you are led to believe that this is her movie. She is the star. Nothing could be further from the truth. In the previews she has about 90% of the screen time. In the movie, she is in maybe 40% of the scenes. It is the four friends who are the real stars.

So while Whipped is funny, because of its lack of sympathetic characters you are never drawn into the movie and are left feeling flat and unsatisfied by the end.