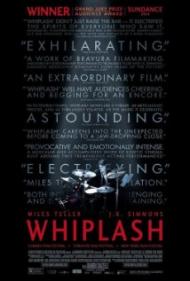 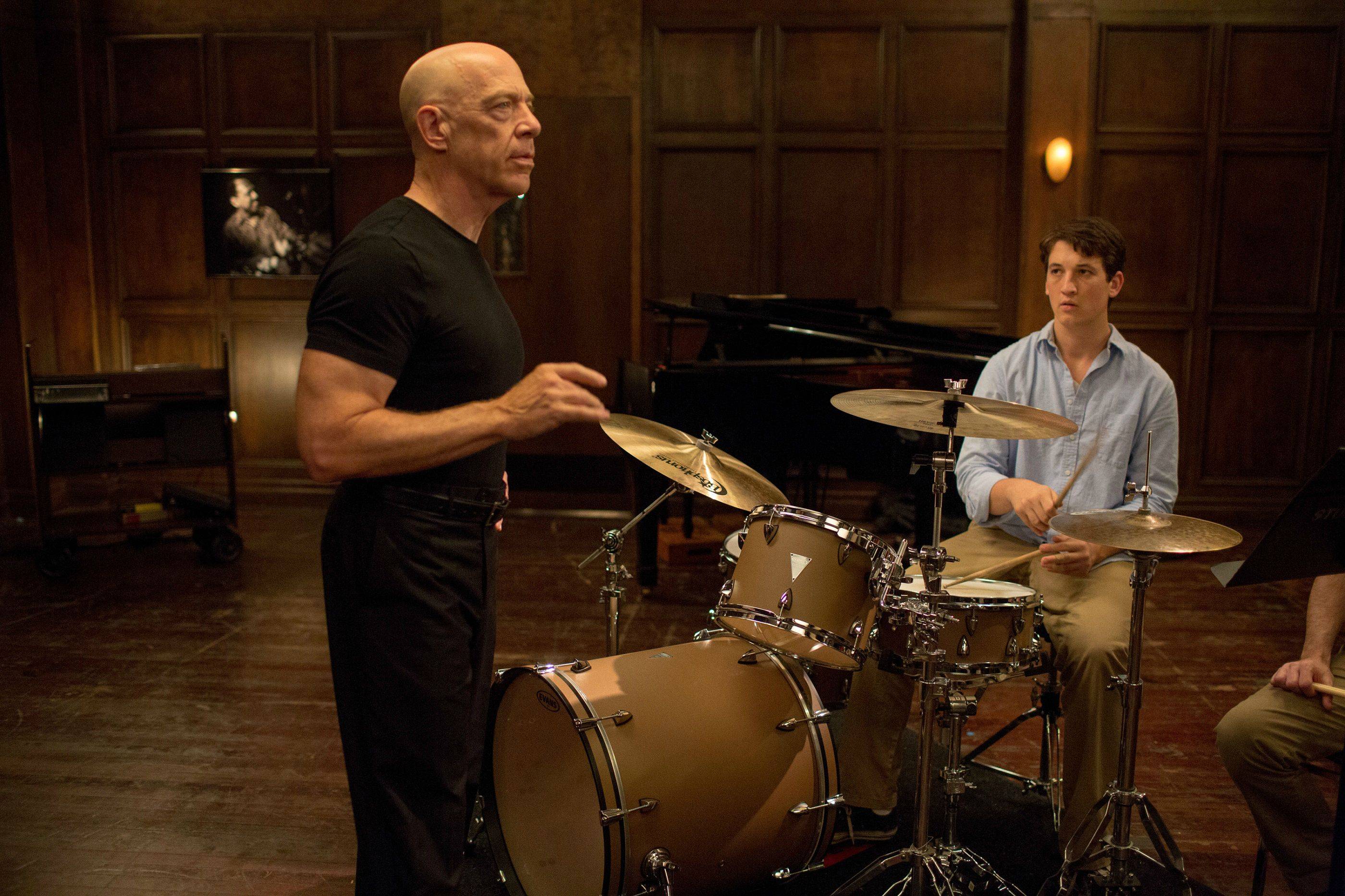 Whiplash is gaining attention for the performance of J.K. Simmons with many experts already considering him a lock for the Supporting Actor Oscar. While he does give an intense and award worthy performance, focusing exclusively on him does a disservice to the rest of the film, which is an entertaining one even beyond his part. And, unlike most award contenders, it runs under 2 hours and is swiftly paced.

Miles Teller, who you may recognize from this year's Divergent and who will soon be starring as Reed Richards in the upcoming Fantastic Four reboot, stars as Andrew, a first year drummer at an exclusive musical conservatory. He's selected to join the school's jazz band by its conductor, Terrence Fletcher (Simmons). Fletcher trains his musicians as if he is a drill sergeant, demanding perfection and offering emotional abuse when they don't live up to his expectations. Andrew, who dreams of becoming a great musician, puts up with all of it, craving Fletcher's validation, practicing endlessly, until his fingers bleed. And in the cutthroat, high pressure world of this exclusive music school he is just one of several drummers willing to put up with this abuse for the chance to compete.

Simmons is terrific as Fletcher. As abusive as he is, he never sees himself as a villain. He likes to tell the story of the great Charlie Parker getting a cymbal thrown at his head after failing to keep time during a performance, which supposedly inspired him to practice over and over again. He sees himself as providing that sort of inspiration. And even though he's playing a monster, there are several moments where we get to see the human underneath. Even if some of these scenes turn out later to have been a lie or part of a performance.

Teller, is also quite good as Andrew. He's arrogant and full of his own sense of talent. He has little regard for anyone who doesn't appreciate jazz or his talent. He breaks up with his girlfriend in a cruel manner when he decides that spending time with her will distract him from his music. He has no friends at the school, just competitors. The scenes between Andrew and Fletcher are riveting and tense. He is also able to provide some authenticity to the drum scenes since has been playing in real life for years and practiced extensively in preparation for the role.

Writer/director Damien Chazelle, himself a musician while in school, reportedly based the character of Fletcher on one of his own teachers, although he's admitted that he exaggerated him greatly. Through his script and his direction he's created a tense film from what could have been a dry subject. The story of a young musician becomes almost a war between student and teacher. It doesn't seem like the kind of movie that would keep you on the edge of your seat, but many scenes do just that. And even though the ending feels highly dramatized and a little Hollywood, it's still a satisfying climax to this story.

Simmons might be the only person associated with this film to walk away with an award on Oscar night, but perhaps his win will draw attention to it. It certainly deserves it. 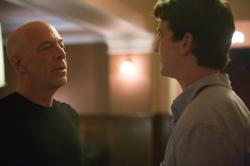 I agree with Scott that many individual scenes were very tense and kept me on the edge of my seat. The movie as whole though, is not as great as some of its parts. There is more music than plot. There is more sweat than dialogue. There is more blood than motive.

Andrew wants to be an amazing musician and Scott mentioned how the movie goes to great length to show just how much he is willing to sacrifice to reach that goal. The problem is that it never tells us why. What separates Andrew from those other two drummers that he competes with? Why do neither of them put in the effort he does? Sure, they both must practice and we see the look of pride on the one drummer’s face when Fletcher brings him into his band. They all want to be considered amazing but the only thing we get from this story is that Andrew wants it more. Why?

Although I agree completely with Scott that Simmons is fantastic as Fletcher, I disagree with one point he makes. Fletcher is not teaching music he is teaching greatness and as such takes extreme measures to do so. He is a villain and he knows it but he thinks the end justifies the means. Look at how at first he comes on nice and easy with Andrew, asking him about his parents and such, only to use that personal information later to mock Andrew. Fletcher is not so much a monster as he is a man willing to take whatever steps necessary to win and that is the entire point of the movie.

Fletcher and Andrew are one and the same. Fletcher thinks nothing of yelling derogatory terms at his band members or playing mind games with them. Sure it is cruel but what of Andrew. Scott mentioned how he breaks up with his girlfriend for reasons he only imagines. Look at the dinner table when he gets into a conversation with his cousins. He insults one who plays for a small football team. The offended cousin challenges Andrew with, “Come play with us.” Who comes back with, “Four words you will never hear the NFL say.” Fletcher and Andrew do not care who they hurt.

What separates them is that Fletcher is a vindictive son-of-a-bitch. Just after Andrew joins Fletcher’s band, Fletcher asks the entire band who is out of tune. He gives them a very brief amount of time to confess. When no one does, Andrew witnesses Fletcher's unadulterated wrath on a particular student. Later in the film, Andrew and Fletcher have a quiet moment together where Fletcher gives Andrew a moment to confess something and when he does not, he too feels Fletcher's wrath in a very calculated and despicable way.

Whiplash is a film that may be better enjoyed by those who know music or at least played an instrument in school. My oldest son played in his middle school band and we went to their competitions, which were very similar to what we saw in this film. He had no passion for it and quit after his first year when he found out how much after school time he was expected to spend practicing. As Whiplash demonstrates, to bring out greatness, one must put in the work.

While I do not see this film as great, it certainly contains moments that have stayed with me and only improved as I think more about them. One thing is for sure. J.K. Simmons’s days as a State Farm Insurance pitchman are over.

Fletcher may have convinced himself that he's teaching greatness but really it's just an excuse for his sadistic personality. There is a world of difference between being a strict taskmaster and being an emotionally and physically abusive SOB. Fletcher is clearly the latter. And how insulting is it to the memory of Charlie Parker to say that he only became great because someone once threw a cymbal at his head?

I found Whiplash to be just a so-so film with exceptional acting from its two leads. Yes it runs less than two hours but then there really isn't all that much story to it. And the climactic scene seems to go on and on. It features the main thing I have always disliked about jazz music - the endless, spontaneous solos that feed the musician's ego more than they gratify the audience. I'll be the first to admit that I'm no student of music but I saw nothing about Andrew's final drum solo to indicate genius – and Fletcher's very public change of heart feels a bit contrived.

I disagree with Eric that Fletcher and Andrew are one and the same - although I agree with him that Fletcher is a vindictive son-of-a-bitch. Fletcher is a classic sadist. He enjoys inflicting emotional and physical duress on others. Andrew is more of a narcissist in that he spends very little time thinking about anything or anyone other than himself and his music. Sure he is dismissive and rude in terms of the feeling's of others, but it isn't out of malice. He simply doesn't care about anyone other than himself. What they have in common -besides music- is that neither is a likable person.

The fact that this movie about two such unsympathetic individuals manages to entertain at all is a testiment to the script and the cast. I can't say as much for the direction, which I found to be rather pedestrian – and a bit annoying during the final scene. Actually Andrew is somewhat sympathetic in the sense that many young people are extremely self-centered and he does mature a bit as the film goes along.

As a showcase for J.K. Simmons and Miles Teller, Whiplash succeeds. As movie entertainment it's only partially successful.