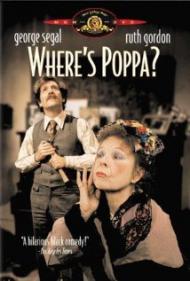 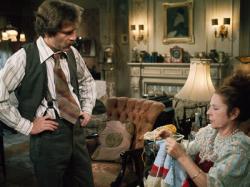 Where's Poppa? isn't for everyone. Its humor is extremely vulgar and the antithesis of political correctness. It is filled with stereotypes such as jive talking black muggers, a blood thirsty military officer, and it includes such scenes as an old woman kissing her son on his bare ass, a woman relating an anecdote about her husband taking a shit in bed, a father stifling his nagging wife by strangling their son, and a man unknowingly raping a male police officer in drag (the punchline of this last joke being that the officer later sends the man flowers). If this sounds funny to you then Where's Poppa? is a must see movie.

Directed by Carl Reiner from the novel by Robert Klane (he also wrote the adapted screenplay) this 1970 movie broke new ground in terms of American cinema vulgarity. It was the first mainstream American movie to feature the term, “cocksucker” for example. And it includes the following bit of dialogue between a son and his mother. Gordon Hocheiser: “She's not just another nurse, ma. It means a whole lot to me, ma. And I want you to know that if you mess this one up for me, I'm gonna punch your fuckin' heart out. Got it?” Mrs. Hocheiser: “Such a nice boy.”

The movie's depiction of New York City practically screams early 1970s while also managing some sharp satire. The best examples of these are the military officer who, while in court, begins proudly telling how he loves killing in great detail. This was at the height of Vietnam but today still packs a punch. Another scene parodies the difficulty African/Americans have getting a cab. A black woman is shown trying in vain to hail one when a man in a gorilla suit (you have to see the movie to understand) runs out into the street and the cab goes right past the woman and stops immediately in front of the gorilla.

George Segal stars as Gordon, a lawyer living with his senile mother played by the priceless Ruth Gordon. He and his brother promised their dying father that they would never put their mother in a home. The movie opens with Gordon donning the aforementioned gorilla suit and attempting to scare his mother to death. She, however, remains as calm as can be and simply repeats her incessant refrain, “Where's Poppa?”

SPOILER ALERT: There are two different endings to the film. The original version emphasizes the Oedipus angle. Gordon, with the help of his fiancee, finally gets the nerve to put his mother in a home. He drops her off and introduces her to an old man at the home as Poppa. She calls him from the home and Gordon returns to her. The movie ends with him getting into bed with his mother and saying, “Here's Poppa.” This version proved too shocking and in 1975 the movie was re-released under the title Going Ape and the final scene was deleted. For my money the original version is the only one worth seeing, unless of course you want a happy ending, which, to my way of thinking, dilutes the dark humor that preceded it. 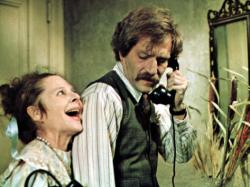 Being a fan of dark humor, I was intrigued to see this movie after Patrick's rather glowing description of it. However, although I agree there are some funny moments in it, it's really not a very good movie. It's rather bizarre and dated elements make it more of a curiosity than entertainment.

I will admit to laughing several times during the film. Most of the humor is generated by shock and political incorrectness (long before that term was coined), such as the cab stopping for the gorilla while skipping the black woman, or the what I found to be hilarious punch line to the nurse's honeymoon story, or the relationship between Segal's brother and his wife.

The rape scene is one of the most audacious attempts at a joke ever put into a film. It's also an interesting look at an aspect of humor. As the scene begins, it appears that a woman's gang rape is about to be played for laughs, but isn't it interesting how after it turns out to be a man in drag, the joke somehow feels safer? And then of course the final punch line, with the raped man turning out to have enjoyed it, takes a bit more of the edge off of it. It's interesting because, while a man getting raped by a group of other men would in reality be no less traumatic than if it were a woman, but somehow it feels more like comedy than if it were a woman. Is that because men in drag have long been used as a staple of comedy?

Not all of the jokes work. I didn't find Ruth Gordon to be funny at all, just annoying. The scene in the courtroom with director Carl Reiner's son Rob playing the defendant against the Colonel that he assaulted doesn't really work either. It's not paced, staged or written very funnily. In the hands of Monty Python, such a joke could have worked, but here it simply feels mean spirited, anti-military and very much of the Vietnam era.

I do agree that seeing New York City back in the bad old days when crime was rampant and White Flight was in full effect is interesting. Knife welding muggers in Central Park would make big news these days, while in this movie and at that time, it was all too common.

If this movie proves anything, it's that you need more than just a few funny moments to make a movie. Or at least, if that's all you're going to rely on, then you need to be consistently funny throughout. Without more than that, you need a plot or a character to hang the movie upon and this movie doesn't have that. At least it doesn't have characters that I liked or cared about. It feels like a failed experiment in bad taste. 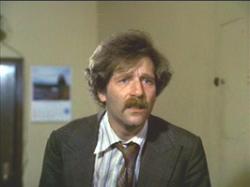 George Segal looking how I felt after watching Where'e poppa?

Dark humor makes light of serious or morbid subject matter. The best films that depict dark humor are the ones that satire outrageous situations that usually involve crimes or immorality. There have been many great ones, such as The War of the Roses (1989) and Horrible Bosses (2011). A dark comedy can create huge laughs dealing with crimes such as abduction in Ruthless People (1986) or a foul mouthed mall Santa in Bad Santa (2003).

Where’s Poppa? deals with such subjects as matricide. Throw Momma from a Train (1987) dealt with that issue as well but it set up the killing by showing the mother in question as such a horrible beast that we understand the desire to knock her off. The mother here is by no means annoying enough to deserve death, thus seeing her son trying to kill her is not funny by any means.

I agree with Scott that the courtroom scene is misplayed, much as the entire film is. I get that Reiner is trying to make the general into a buffoon and the hippy into a hypocrite but neither one generates a single laugh. The general comes off as stupid and the hippy is nothing more than an asshole.

The rape scene is horribly executed. My brothers mentioned that the joke is that the victim turns out to be a guy who enjoyed the rape. In better hands that could have been funny. However, Reiner does not play up the satire enough. As the man explains, he got excited and was forced to rape what he thought was a girl. The fact that he got aroused to rape is more disturbing than hilarious.

Finally, we get to the film’s last punch line. Again, Reiner delivers it straight, without a single wink to the audience that this is intended to be a joke. Dark humor satires a serious subject. Simply showing a shocking subject or scene does not in and of itself create a laugh. It has to be exaggerated or placed out of context to be funny.

Think of this, Kevin Kline eating the fish in A Fish Called Wanda (1988) is not in and of itself funny. Having him gorge himself on an aquarium full of fish to get a crying Michael Palin to talk is. The humor is not just in the shock but in how the shock is delivered.

From start to finish, Where’s Poppa throws WTF scenes at the audience. Some are a bit shocking while others are just gross. Only occasionally does it hit the right note, such as when the gorilla gets the taxi before the African American woman. That was funny. A story about a man who shit his bed after sex is not. It could have been, if the girl telling the story had prefaced it with how her husband promised to fuck the shit out of her.