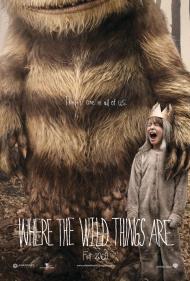 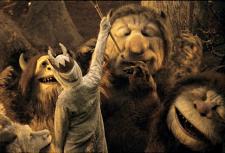 Max is king of the wild things.

Excluding book series like Dr Seuss and Curious George,Harold and His Purple Crayon and Where The Wild Things Are are the most read children’s story of the past several decades. All are about children exploring their world and encourages them to use their imagination. Where the Wild Things Are follows suit, but adds a little conflict resolution to the mix. The film version keeps the central gist of the story and expands it with plenty of detail.

Max is a boy at an awkward age and point in his life. The book and movie never state his age but he is played by, then, eleven year old Max Record. His parents are divorced. His big sister is hanging with her own friends. His Dad is no where to be seen. His Mom has a new boyfriend. With a nod to the global warming fad, his teacher only adds to his depression by talking about mankinds future demise.

Feeling the stress of his life changing before him whether he wants it to or not, Max runs away, finds a boat and sails to the land where the wild things are. As in the book, Max is made their King and he controls what everyone does. As Carol, a wild thing, says to him, "It's going to be a place where only the things you want to happen, would happen."

Although a children's story, the film is a bit deep. Each wild thing represents a person or an experience from Max's real life. His time spent with the wild things is his needed therapy in dealing with the changing events of his home life. The wild things have issues and plenty of emotional baggage. At first, Max just wants to play with them, but personalities and conflicts cannot be avoided. Thus, Max learns form his time with them and returns to his real world a stronger, wiser child.

The message and beauty of Max's experience is poetic and moving. However, the story is far to serious and dramatic for children to enjoy. The movie is very heavy handed in it's emotional allegory. That makes for an artistic film, but not a very entertaining family film.

The theater I watched this in was full of kids who no doubt had the book read to them. Although some action scenes were added, no on in the audience cheered or laughed the entire film. It was the quietest experience I ever had in a theater with so many children in attendance.

Where the Wild Things Are is a great film on many levels. The wild things come to life even though they merely resemble ugly mascots. Max's time spent in their world is as serious and dramatic as his reality. Adults may be able to enjoy it's message and meaning, but children with likely settle for the book. 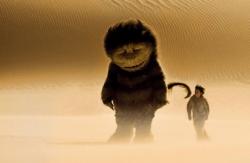 Where is the charm? Not where these Wild Things are.

This movie lacks all the charm of the timeless book. It’s a bad idea to begin with. I mean why would you take a short children’s picture book with very little narrative and try to turn it into a feature length movie? These Wild Things look and talk like new age, H.R. Puffnstuff characters on crack.

As Eric wrote the allegorical message here is dealt with a very heavy hand. Bizarrely, it seems to be aimed at adults nostalgic for their childhoods rather than at any kids who might be currently discovering and falling under the spell of the enchanting illustrations in the book.

Unlike Eric I didn’t find it moving and poetic at all. The story is all filler and the dialogue whiny and annoying. This might have worked as an animated short but using a real boy with CGI Wild Things makes for strange results.

Eric, there is no nod to global warming. The teacher simply tells his class that one day our sun, like any other star, will die. This fact scares Max, just as any child’s first realization that they will one day grow old and die frightens them. I don’t remember any of that being in the book though and it certainly adds nothing to this simple, whimsical bedtime story.

Where the Wild Things Are, the movie, is a bad idea made worse by a trite script and overall weirdness that never gels. The book was all about imagination and freedom and a boy’s dreams of adventure. The movie squashes all of that and instead offers platitudinous child-psych 101.