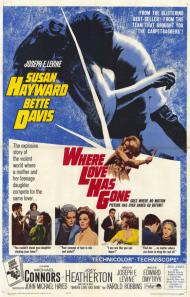 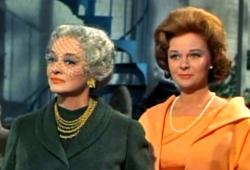 Bette Davis and Susan Hayward in Where Love Has Gone.

Where Love has Gone is a lush 1960's soap-opera from the book by Harold Robbins that was loosely based on the infamous stabbing murder of Lana Turner's lover by her teenage daughter. Instead of being a famous movie star, the character -played by Susan Hayward- is a famous sculptress from a wealthy society family. Her domineering mother is played with gusto by Bette Davis and her daughter by a histrionic Joey Heatherton. This movie is a battle of the divas with Hayward playing it with utter seriousness while Davis and Heatherton seem to be in on the inherent camp of the plot.

Directed by the veteran Edward Dmytryk and produced by Joseph E. Levine although with the gloss and melodrama of a vintage Ross Hunter/Douglas Sirk production. The sets are gorgeous and the gowns by Edith Head are properly extravagant. The male lead (Mike Connors of television's Mannix) is on the wooden side and gets completely overshadowed by the women and by DeForest Kelley of Star Trek fame as Hayward's cynical agent.

The joy here is watching the women chew the scenery. Hayward barking out lines, Heatherton crying, and Davis clearly enunciating every syllable. The plot has been done many times before and since, and you know where the story is heading, although there is a slight Mildred Pierce-like twist at the end, but it's fun watching these hams at work.

One unintentionally funny aspect of the movie is the long flashback sequence near the beginning. It is supposed to take place 15 years earlier but nothing is different. All of the characters appear to be the same age, the clothes and hairstyles are the same, hell even the sets look the same.

The sex in the story is classic Harold Robbins and it was probably fairly shocking for its day. Heatherton's character is only 15 and is already sexually active with her mother's lover. Hayward's character is portrayed as a sexual predator that picks up men in bars and on street corners. When her alcoholic husband makes sexual advances towards her she responds, "You're not the first today, I'm just getting warmed up!" He tells her, "You're not a woman, you're a disease!"

Oh the drama of it all.