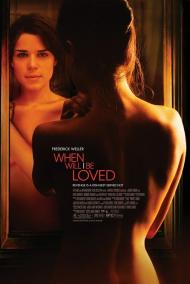 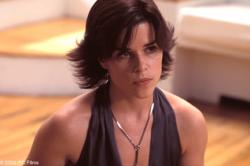 Neve Campbell in When Will I Be Loved.

When Will I be Loved is an hour's worth of story that lasts 81 minutes. The first twenty minutes or so do nothing but introduce us to the main characters of the film in scenes that feel improvised -- but not in a good or interesting way. And while the actual plot, when it finally starts, is entertaining enough, the memory of those first twenty minutes haunts your enjoyment of the rest of the movie.

Neve Campbell stars as Vera, the daughter of rich parents with an amazing apartment in Manhattan. Her boyfriend, Fred, is a two-bit hustler scumbag. He is approached by a very rich Count with an offer of $100,000 for the chance to have sex with Vera. Before you can say "Indecent Proposal", Fred accepts the offer.

Of course, you don't learn all of this right away. First you have to sit through an overly long job interview Vera has with a Professor (played by the director, James Toback), a not funny scene between Fred and a cohort of his as they list off bizarre ways of making money, Vera videotaping sex between her and her girlfriend, and most inexplicably of all; a cameo by Mike Tyson. Only after all of this, do we get to the point where Fred broaches the subject of the Count to Vera.

With something substantial to hang on to, the movie picks up considerably at this point.

Much to Fred's surprise, Vera agrees to his and the Count's offer of money. When the Count arrives at Vera's apartment, she even manages to get him to increase his offer to $1 million. Clearly, Vera is not to be underestimated, as she proves when she begins to play the Count and Fred against each other.

Of all the characters in the film, Vera is the most interesting and yet we learn very little about her. She obviously comes from money, and yet she's looking for a job as an assistant to a College Professor. Her boyfriend is an idiot and she keeps a girlfriend secret from him. I wanted to learn more about her, but we never really learn her motivations.

The movie begins and ends with Vera taking a shower. This being Neve's first onscreen nudity, it is likely that this is why this movie will be remembered. During an interview on David Letterman earlier this year, Neve claimed that she performed this nude scene because it was artistically right for her character; I'm not sure that I buy into that theory. We learn very little about Vera during the plot and I'm not sure what seeing her nipples is supposed to teach us other than naked actresses draw people's attention.