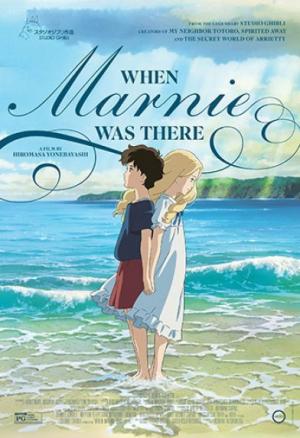 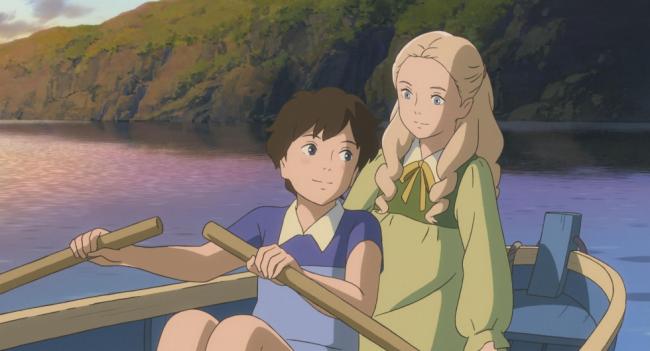 Anna and Marnie in When Marnie was There.

When Marnie was There is an old fashioned story of the type Disney might have made in the 1970s as a live action family film. It's based on the 1967 young adult novel by British author Joan G. Robinson back when books aimed at young girls didn't involve vampires, love triangles, or dystopian futures. Instead it's a ghost story wrapped in a rather touching soap opera.

Like many a children's coming of age story, it takes place over the course of one summer. Anna (voiced in the American dub by Hailee Steinfeld), is a 12 year old girl having a difficult adolescence. She lives with her foster parents and has difficulty making friends. Following an asthma attack, her foster mother sends her to live in the country with relatives for the summer. Once there, she continues to have trouble fitting in until one day, while exploring the countryside she happens across a beautiful old house on the marsh where she meets a young blonde girl named Marnie. However, when next she visits, the house is dilapidated and Marnie is nowhere to be found. Is she a ghost? Had Anna slipped backwards in time for a day? And what is Marnie's connection to Anna? The answers to these mysteries play out over the summer and help Anna break out of her shell, make friends and maybe even make peace with her past.

This might be the last film to be produced by Studio Ghibli, the company behind such films as Howl's Moving Castle, The Tale of Princess Kaguya, and The Wind Rises. They have been consistent contenders for the Best Animated Feature Oscar and this last entry as the company takes a hiatus, is no exception. In America, animation is almost exclusively aimed at children, but foreign countries, with Japan in particular, haven't been afraid to use the medium for more serious films. This is a children's story, but told in a way that no American studio would ever tell in animated form. There's no talking animals or robots or cutesy characters.

The story plays out slowly over the summer, which helps create atmosphere, but also adds to the old fashioned feel. Perhaps it's because we're conditioned in America to expect a frenetic pace from animation that this one seems even slower than it actually is. However, the fact that these are fully developed characters, beautifully animated, the story never lost my attention. The mystery kept me invested in seeing how it would all end.

Although they've only ever been niche films in the US, Studio Ghibli has produced 8 of the 15 highest grossing anime films made in Japan, with Spirited Away earning $290 million worldwide. It's the retirement of legendary director, producer, writer, animator Hayao Miyazaki that is prompting the studio's, at least temporary, closure. While When Marnie was There isn't their greatest film, it is a bittersweet one that fans of their work will definitely enjoy.