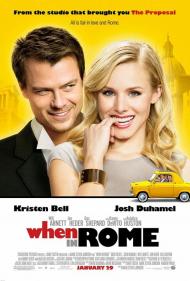 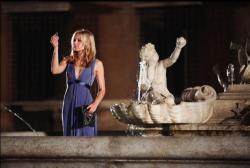 Is it ethical to steal coins from a fountain?

It is rare that a movie can be so bad that I do not get all the way through it.  When in Rome is that exception.   Even the most romantic parts of my brain could not bring itself to find something worth enjoying.  I would rather watch a Kristen Stewart marathon than even part of this movie again.

Beth is every cliche that has ever appeared in a Hollywood romantic comedy.  She is an attractive, intelligent, pleasant enough New York business woman, and of course unlucky in love.   While attending her sisters wedding in Rome she finds herself attracted to the best man.  When she sees him kissing another woman she decides to get drunk and steals five coins from a fountain.

Each coin was thrown in by some love lorn guy.  As soon as she plucked them from the fountain they all instantly fell in love with her, even though, she has not met any of them.  However, they all happen to live in New York and know exactly what she looks like.  They pop up every where to flirt with her, but they are all so inept at it, that they end up just harassing her.  The best man calls her and she brushes him off without a question.

This is where I turned it off.  No doubt if she would have just given him a moment to explain about the girl in Rome everything would have been solved.   The guys flirting with Beth are pathetic, and not in a funny way.  As in Leap Year, and many other recent romantic "comedies," Beth is a little klutzy.  She angers her in-laws at the wedding by not being able to complete a tradition of breaking a vase.

Beth is such a stereotype that I did not care if she fell in love or died alone.   No doubt she will end up with Duhamel, and he will have some pointless excuse for kissing the girl in Rome.  The crazy stalkers will realize they do not really love her, or maybe that would have all been a dream.  Either way, I again have no interest in how that is resolved.  There are dumb movies and then there is When in Rome. 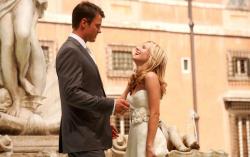 Josh Duhamel and Kristen Bell in When in Rome.

Eric, a movie so bad you couldn't get through, I had to see.  I was prepared for something so truly, horrifically horrible that my retinas would be scarred for life merely from watching it.  I was almost disappointed to find that it isn't nearly so bad as you describe.  In fact, while it's certainly no treat to watch, I've seen and sat all the way through much, much worse romantic comedies than this one (Leap Year comes to mind instantly).  And Kristen Bell is far more charismatic than Kristen Stewart!

The biggest problem this movie has is how predictable and safe it all is.  Yes, Nick does have an excuse for kissing the girl in Rome and you can easily see where all of it is going.  There are no real surprises and there are lots of Rom-Com cliches and stereotypes littered throughout its blissfully short running time.  I'm sure Eric that there isn't anything I could tell you about the ending that you would be surprised by.

If they wanted to take chances, why not have one of the coins Beth pulls out belong to a girl.  In fact, I would guess that more women than men would throw coins into that fountain, so why not have several of the them belong to women.  Or, an even bolder choice, have Beth be so bitter that she can't believe any man would fall in love with her and have her blame the coins every time a guy finds her attractive and at the end of the movie have Nick throw the coins away and prove to her that he does love her and that the whole magic coin nonsense was all in her head.

About the only good things I can say about the movie are that the leads are likable enough and that the shots of Rome are pretty.  Both the scenery and the cast are underused though.  Bell and Duhamel are both attractive and charming enough as they've proved in other things, but the script they're given is so bland that they just come across about as exciting as white rice.

The jokes all fall pretty flat.  I mean any movie featuring Jon Heder that brings in Pedro from Napoleon Dynamite for one scene for a quick laugh about 5 years too late is really scraping the bottom of the barrel.  About the funniest thing in the movie is watching the very unrhythmic cast try to dance over the end credits.

I have to say though that as dumb as this movie is, there are far, far dumber ones out there.