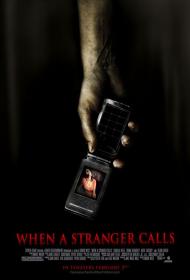 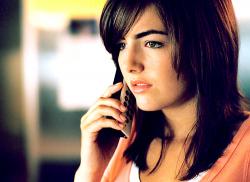 Camilla Belle in When a Stranger Calls.

When a Stranger Calls looks in the trailer like a horror film. There is a serial killer and a few victims, but blood is at a minimum. There are some creepy moments but the horror is almost nonexistent.

Jill is grounded from going to a bonfire because she went over on her phone minutes. So instead of being with her boyfriend, whom she's mad at, and all of her friends from school she has to baby sit a couple of kids way out in the middle of nowhere.

When a Stranger Calls best aspect is it's setting; a large house in the woods that sits next to a lake and has huge windows that anyone could be looking in and allows for creepy looking lights to reflect off the water back onto the windows. In fact, lighting is the movies scariest aspect. The house on the lake has motion detection lights through out the rooms. This provides opportunity for the baby sitter to be freaked out by lights all of a sudden coming on with the knowledge that someone just set them off.

After getting instructions from the parents, Jill settles down for a boring evening of passing the time until the parent's come home. Soon she starts getting phone calls where no one says anything on the other end. A friend and her boyfriend call and she assumes someone from school is just playing a prank. Then the housekeeper, who for some unexplained reason is not used to watch the kids, comes up missing. Then a friend of Jill's, who kissed Jill's boyfriend and thus has Jill mad at her boyfriend, shows up to be murdered. Finally, Jill's prank caller speaks and tells her to check on the children. After she does he calls right back and she realizes that the stranger is watching her. She calls the police who trace the call and give her the news that the calls are coming from inside the house.

The killer finally shows himself the last 10 minutes of the movie. Jill does battle with him and the movie ends way to soon. This movie is not even an hour and a half long. Some more fighting, close calls and chasing could have helped this movie that is almost all anticipation and very little payoff.