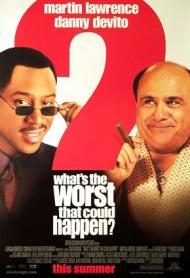 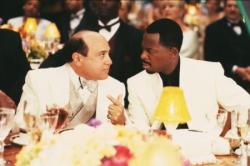 Talented ensemble cast and intriguing premise aside What's the Worst That Can Happen? really isn't very funny. Sure there are moments of humor such as DeVito's scene in front of the Senate committee or the scene-stealing flamboyantly gay detective. It's just that when a comedy doesn't keep you busy laughing you suddenly start noticing the many plot holes and contrived situations. Sure truly great comedies use these same gimmicks but they keep the audience cracking up too much to pay attention to where the predictable plot is going. This one doesn't manage to do that.

Martin Lawrence plays Kevin Caffery, a burglar who gets caught in the act of robbing tycoon Max Fairbanks (DeVito). The tables are turned when Max steals a ring from the thief. Kevin spends the rest of the movie doing ANYTHING to get his ring back.

The veteran-supporting cast includes John Leguizamo, Glenne Headly, Bernie Mac, Larry Miller, Nora Dunn and Ana Gasteyer. With such a talented line-up behind two of the funniest men in the business today this should have been a laugh riot. Instead it barely disturbs the peace. Twice this movie uses one of the oldest and most worn out sitcom gags in the book. You know the one where in one scene a character is insisting that something is not going to happen-cut to the next scene where it is happening. Does anyone out there still find that funny?

Not by a long shot is this movie the worst that can happen; however, given a better script, this could have been a red hot comedy; instead of being merely tepid. 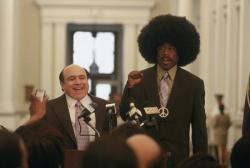 I've never been a fan of Martin Lawrence, but when I saw the previews to this movie, I thought maybe this would be the movie that changed my mind. The premise and supporting cast looked interesting. Of course as you can probably guess from Patrick's review and from the number stars I have bestowed upon it, that my feelings towards Martin Lawrence movies has not changed, and has in fact, been strengthened.

To me, this movie shouldn't have been a comedy. It should have been a thriller with comic overtones. Instead, it tries to be a comedy first and only slightly thrilling as a second thought. I don't know if Martin Lawrence lacks the confidence to play a serious role, or if he is simply trying to give the fans what he thinks they want. As an example of what I mean, there is a scene at the very beginning of the movie when he is at an auction studying a painting. A snooty saleslady approaches him and tells him that if he's looking for the sports memorabilia, it's around the corner. The implication being that she thinks since he's black he doesn't know art. Of course he is an expert in portable valuables, and he informs her that the painting is a fake and manages to bring her down several pegs. All fine and good. He starts off smooth but then becomes Martin Lawrence, going into a comedy routine which involves pelvic thrusts and low humor, thus ruining the moment. Instead of proving her wrong, his actions simply prove her point that no matter what color his skin, this is clearly not the kind of person who belongs in this posh auction house.

Another comic moment gone awry takes place at the end and basically makes the entire movie a farce. Putting on a huge afro wig, Lawrence pretends to be DeVito's lawyer in front of a Senate sub-committee. Spouting nonsense, we are supposed to believe that the senate and press believe he is a lawyer. Now if this was that kind of zany comedy throughout, it would be acceptable, but the occasional serious, realistic moments belie that kind of comedy.

Patrick mentioned the gay detective. He was an interesting character, but his appearance from left field, half-way through the film, leaves you asking, 'What the Hell?', rather than laughing. If he had been in it more or his character more fully explained, he could have been hilarious, instead he is simply confusing.

Despite Patrick's claim, I don't see how anything worse could have happened to this pathetic film caught somewhere between comedy and thriller, and succeeding at neither. 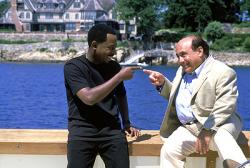 Martin Lawrence and Danny Devito in What's the Worst that could Happen?

What's the Worst that could Happen? had my attention from the second it started. The opening credits feature Frank Sinatra singing "High Hopes" as sampled by Craig Mack. The problem is that the theme is the most memorable part of the entire film.

The opening scene, that Scott mentioned, is horrible on several layers. Not only does Lawrence make an ass of himself, he shows what a horrible actor he is. Although he is playing a man of knowledge, he seems very uncomfortable reading his lines, using such words as "burnt umber" and "venetian" as if he had just that day heard of them.

What is really odd about that scene, is that Lawrence is playing a thief, who will in fact steal a painting shortly after the auction that a girl he is seen with owned. If you are a thief of high valued items do you really want to bring so much attention to yourself? That entire scene should have been rewrote and played.  Lawrence was hot off Big Momma's House and is credited as executive producer on this film. Someone mistakenly allowed him far too much say in this film or wrongly encouraged him to play it up.

I agree with my brothers that the comedy does not work, and I again blame Lawrence. At one point, Leguizamo asks Lawrence," You ever read the papers?" and Lawrence answers with a bland delivery, "I used to, but the news kept changing."  While trying to rob Devito, a gorgeous young woman, that Devito just had sex with, walks in on Devito holding a gun on Lawrence, who says flatly to Devito, "You must be rich." When he should have said "You must be rich!"

Sam Weisman has directed such forgettable comedy films as The Out of Towners (1999). He has not directed a film since Dickie Roberts: Former Child Star in 2003. For some reason, Weisman thought he knew comedy, but what passes for jokes here is Devito hitting a tennis ball into his opponents balls and a dog with irritable bowel syndrome.

Devito has a long career of working with "A" list stars, providing just the right amount of his trademark annoyance to make the stars all the more likable. Although Devito plays his usual despicable self here, he is not able to generate any sympathy for Lawrence.  Who are we to root for, the unfaithful troll or the obnoxious thief? I never cared in the least how this film played out or what happened to anyone involved, and worst of all, I never laughed.

Patrick, when you have a script this poor, a director this bad and a lead actor who has no clue how to do his job, an argument could definitely be made that this film is the worst that can happen.