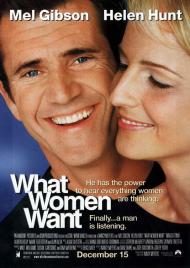 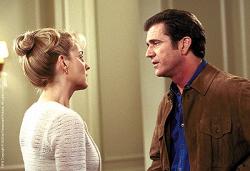 As one of the biggest and most bankable stars in the galaxy, Mel Gibson can open almost any type of movie with great numbers. There are only a few other stars in his class today; Hanks, Cruise, Ford. Having already scored earlier this year with his man's movie, The Patriot, it is only fair that he end it with a chick flick. It almost seems as though this movie was created around the idea of having the perfect date movie for the Holidays. Its very plot revolves around the concept of a very sexist ladies man getting in touch with his feminine side in order to be a success at a Chicago ad agency that recruits a strong female executive (Helen Hunt) from a competitor and promotes her over him.

Things get more complicated when, through a freak accident that is never explained, he begins hearing aloud the thoughts women around him are having. This does not lead to the level of hilarity that one expects from a great comedy but it does manage to produce a few good laughs. Unfortunately most of these are one-liners that have already been given away in previews. Still I did laugh out loud a few times and the mostly female audience did seem to be enjoying it.

I did enjoy Mel in this movie. He goes from a completely selfish jerk to being a real compassionate human being and does it without ever seeming phony or unbelievable. He is in fact more charming than I have ever seen him and proves himself quite adept at a Cary Grant type role. Considering he also provided the voice of Rocky Roads in Chicken Run this has been a good year for this one time sexiest man alive.

This movie is a bit too long and some of the big name cameos seem a bit contrived (Bette Midler as a psychologist for example), still it is lightweight entertainment that won't tarnish the careers of anyone involved. 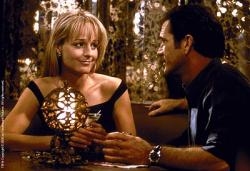 I appear to have enjoyed this movie more than Patrick did. Perhaps this is because I was on a date with my fiancée when I saw it. This setting may have influenced my views somewhat, but then, when aren't our moods and surroundings affecting our opinions. However, I digress, whatever the reason or reasons, I very much enjoyed this romantic comedy starring two of today's brightest stars.

As Patrick mentioned many of the best jokes were shown in the previews, but there was still plenty of humor left over to go around. And the jokes worked well as part of the plot, unlike some movies where it seems the jokes are inserted just for the sake of having jokes.

The two leads play excellently off each other and provide some solid onscreen chemistry during their scenes together, Helen Hunt matches Mel Gibson, but this is clearly his movie. He is what women want, and the director gives him to them in large doses, featuring him in nearly every scene.

My only problem with this movie is it's length. Over two hours is a bit much for a romantic comedy and several of the subplots could have been snipped without any loss of impact to the romance or the comedy. Still, this wasn't enough of a problem to lessen my enthusiasm for this, one of the few romantic movies to come out this year. 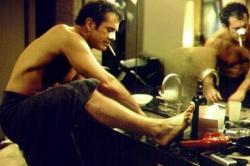 Mel Gibson in What Women Want.

What Women Want is an overblown male bashing propaganda film. Mel Gibson's character, representing men as if we all are like him or wish to be, goes about the task of getting in touch with his feminine side.

The movie goes to great length to show just how badly men understand women. It implies that if we were able to communicate better with them the world would be a better place. If we just took into consideration all the things women worry about, blah blah blah.

Has anyone, outside of Melissa Etheridge, ever heard the expression 'getting in touch with her masculine side?' Why are men always expected to make this great leap into understanding women. They understand us just as little. Oh yeah, then why do you ask questions during a ballgame? What do you think commercials are for?

It was too long and not nearly funny enough.