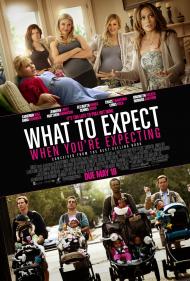 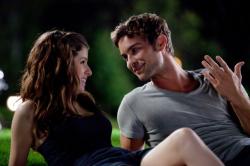 Anna Kendrick and Chace Crawford in What to Expect When You're Expecting.

Having  never been a parent or been in a relationship with a pregnant woman, I can't tell you what to expect when you're expecting, but I can tell you what to expect if you're expecting to see this movie. And that is every tired old pregnancy cliche that you've ever seen in countless sitcoms and movies produced over the past 70 years. There are some funny and a couple of touching moments, but there's almost nothing here that we haven't seen done many times before.

To squeeze all the cliches into one story, the script focuses on five different couples all trying to have a baby. Cameron Diaz plays a famous fitness trainer, who becomes pregnant with her dance partner on a celebrity dance show.  Elizabeth Banks owns a baby store, but can't get pregnant herself, until she stops actually trying. Her husband's father (played by Dennis Quaid), gets his hot young wife (Brooklyn Decker) pregnant at the same time. Anna Kendrick plays a young woman who gets pregnant after a one night stand. And Jennifer Lopez is unable to have kids and so her and her husband decide to adopt a child.

There's also a few supporting characters thrown into the mix, most notably the daddy squad that has been featured so heavily in the previews. This group, which features the likes of Chris Rock and Joe Manganiello seem to be included to try and balance out the estrogen heavy jokes with a little bit of guy humor. Although they do provide some laughs, they're just as cliche ridden as the rest of the movie.

With so many characters to fit into one story, none of them are explored in much depth. It's a talented and likable cast, but the writing isn't that strong and definitely lacks originality. And as is usual with multi-character movies, some of the storylines end up being more interesting than others.

Although it's obvious from the beginning that there will only be happy endings for everyone, there are a couple of heavier moments. I won't say which, but one of the couple's pregnancy doesn't go to full term. They are few and far between, but these dramatic moments are actually slightly more palatable than the so-called funny ones.

The humor that works best is when the movie abandons all sense of realism, not that much of it is very realistic to begin with. Rebel Wilson provides some zaniness as the ditzy employee at Banks' baby store. And Chris Rock's often injured son is likewise worth a laugh or two. And Brooklyn Decker is a scene stealer as the woman whose pregnancy goes so perfectly, all it takes is a sneeze for her to actually deliver her twins.

Perhaps ironically, it is Jennifer Lopez, as the one woman who isn't actually pregnant, that provides the most heart to the story. It's her yearning to have a child and her inability to do so that seems the most genuinely touching.

Maybe if you are or have been pregnant then you'll enjoy this movie more than I did, but you'll also need to have pretty low standards to do so. There's a lazy feel to everything about this production apart from the big name cast. It has a few decent moments, but not nearly enough to fill its nearly two hour running time.

Unlike Scott, I have been a parent and in a relationship with a pregnant woman, I can't tell you what to expect when you're expecting either. I can only tell you what we experienced. Even though my wife and I shared some similar situations to the characters in this film, we still enjoyed it just as little as Scott.

There is definitely a lazy feel to the proceedings. It was never really funny and never really touching. Just as Scott wrote, there are a few decent moments. The funniest ones being any scene with Brooklyn Decker and Dennis Quaid. Scott mentioned that Jennifer Lopez's story line provides a bit of heart, but not enough. Elizabeth Banks almost provides a very dramatic scene, but it goes nowhere.

My wife and I read the book this film steals its title from. It is featured briefly in the movie. The book, an informative read for both parents, is a staple for parents to be. The writers of this screenplay tried to include different scenarios of pregnancies. They succeeded in that, but they never allow us to stay long enough with any one couple to really like or invest in any of them.

One storyline did not make sense to me. Lopez and Santoro are on a limited budget. She loses a big part of her income. They cannot afford the house they want. Yet, despite all that, they can still afford an international adoption. Those cost thousands and thousands of dollars. Even a trip for two to Africa probably put them in debt, let alone the adoption costs. If the writers wanted them to have an international adoption, they should not have played up their financial strife.

Another thing that bugged me was when Crawford takes Kendrick home. It is snowing, yet you can plainly see an air conditioner in the window. Anyone who lives in a cold climate knows you have to take those out in the winter, as they lack insolation. That same night they leave and come back. This time it is pouring rain yet none of the snow is at all melting.

I get it. I am nit picking. I am doing that because this film has so very little to enjoy and I actively searched the film for something to like. As Scott wrote, it has all been done before. The father club was intended to be relatable for dads but "Malcolm in the Middle" already did that, and funnier. The only thing original I found, were details missed by the film makers.

Elizabeth Banks, Anna Kendrick, Cameron Diaz, Brooklyn Decker, and Jennifer Lopez in a publicity still for What to Expect When You're Expecting.

The talented ensemble cast tries their best but, as my brothers wrote, they are unable to overcome the shortcomings in the script. The characters are all bland cliches and the jokes never rise above exaggerated sitcom humor. The few moments that are meant to be touching likewise never feel any more real than your average situation comedy that occasionally attempts to tug at the heartstrings.

On the positive side the story moves fairly briskly, never staying on any one couple too long. But this also means we never really get beneath the surface of their lives either. The few scenes that connect the various characters seem contrived, and there are several coincidences that only seem to happen in the movies. I mean in a big city like Atlanta, Georgia what are the odds that three of the five expectant couples would arrive at the same hospital within minutes of each other?

Elizabeth Banks is quite good (when will she finally get the recognition she deserves?) as the overly prepared mother-to-be whose pregnancy goes completely against her expectations. The scene where she gives her speech before a room full of pregnant women is her best moment.

Like Scott I was pleasantly surprised at Jennifer Lopez. And by that I mean she doesn't embarrass herself, although I didn't buy her as a professional photographer taking baby pictures. (in this day and age where everyone has hi-def cameras on their phones does such an occupation still exist?) She manages to generate genuine emotion in the scene in Ethiopia (by the way I agree with Eric that there is no way they could afford an international adoption).

In one scene Elizabeth Banks' character says that mothers forget all about the pain and hardship of pregnancy and childbirth once they hold their baby in their arms. In a way it's similar to watching this movie. Once the end credits roll you will forget you ever sat through it.