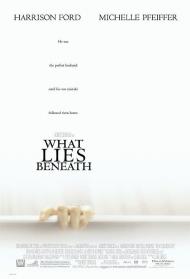 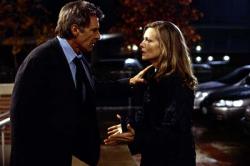 Harrison Ford is OLD. That thought kept going through my head as I watched this predictable yet fairly entertaining romantic thriller. Actually, this is Michele Pfeiffer's movie and she gives a decent performance as the wife of a genetic scientist who starts experiencing unexplainable phenomenon. At first this movie is interesting in the fact that it sets up several different options for where the plot will lead us. However, by the midway point it is pretty clear where things are going.

This movie is more eerie than scary. Director Robert Zemeckis makes good use of sudden loud noises and ghostly images in reflection to startle and set the tone. In spite of this, things never really go beyond the mildly tense level. At the same time, What Lies Beneath cannot be accused of employing overtly shocking tactics that seem to be increasingly popular. There are no decapitations or spurting fountains of blood.

The formula here is a cross between Sleeping With the Enemy and Fatal Attraction, only dreamier than either of those. It's shot almost as if the whole thing takes place under water.

The chemistry between the superstar leads is not what it would seem on paper. Harrison Ford is as wooden as he has ever been. Despite these flaws I was engrossed in watching this well executed, if unoriginal, film. 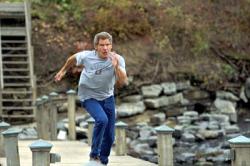 Harrison Ford in What Lies Beneath.

Obviously Patrick is not a Harrison Ford fan. He is not old. He is his age. He plays a man over 40, and he does that naturally. Michelle Pfeiffer looks her age as well, but that's okay. She still looks good. Now that that pointless point has been discussed, on with the review.

This is a thriller that delivers all that you expect from a thriller; twisting plot, surprises in dark places, and characters with questionable motives. This movie adds a bit of the supernatural for good measure. You really don't know exactly where the story is going. Twice you think that everything is settled and then something happens that changes the course of the film. I can't say too much about the plot as I do not want to give anything away. At times it is very Hitchockian. Michelle Pfeiffer makes like Jimmy Stewart from Rear Window at one point. However, sometimes the plot slips into movie of the week mode. The Ouija board scene is one example.

Harrison Ford's performance is not wooden, as has been said. He is fine in his performance. It is, just maybe, that he does not play the big action hero here. That may disturb folks that are used to seeing him always save the day. Michelle Pfeiffer, as stated above, really carries this movie. She has a lot more screen time and is a fine actress.

I jumped in my seat and second-guessed myself a couple of times on who was doing what. That, to me, is a successful thriller. 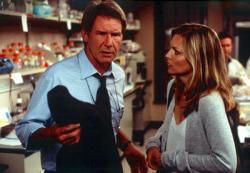 What Lies Beneath, both the title and a question. And a question you will be asking yourself many times as you watch you this totally engrossing, and very eerie film.
This movie is thriller, an adult thriller which will both surprise and entertain, unlike your typical teenager slasher film which Scary Movie skewered so uproariously.

As both Eric and Patrick pointed out, Harrison Ford might get top billing, but this is Michelle Pfeiffer's movie and she carries it effortlessly. Playing the beautiful wife confused by the events around her, struggling to explain the unexplainable. Like his role in Working Girl Ford seems content to play the secondary role to a strong female lead.

Robert Zemeckis directs this movie brilliantly. His use of imagery and noise, keeps the creepiness factor running in overdrive throughout the film, particularly during the first forty-five minutes when you are really not sure which way the film will go.

What Lies Beneath is a question, and the answer is; a very entertaining, edge of your seat adult thriller that will enthrall you to the end.