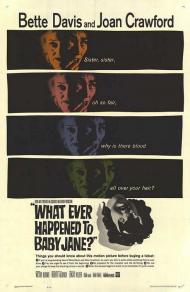 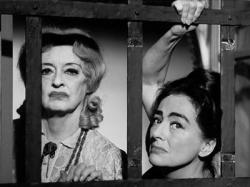 Bette Davis and Joan Crawford in What Ever Happened to Baby Jane.

The image of the deranged Baby Jane Hudson tormenting her wheelchair bound sister Blanche is one of the most indelible in all of screen history. Never before or since have two such legendary actresses faced off in a movie in such a visceral manner. After decades of stardom both Bette Davis and Joan Crawford had seen better days as box-office attractions when they signed on to star opposite each other in this low-budget thriller directed by Robert Aldrich. Made for less than a million dollars What Ever Happened to Baby Jane? was an instant smash, earning 1.6 million its opening weekend. Within a year it had grossed nearly ten times its production costs and quickly became a cult classic. When the home video market arrived in the nineteen-eighties it was a hit again and thanks to the wonder of the DVD format is still earning revenue today. Not bad for two old broads who hadn't had a bona-fide hit in years.

For those not familiar with the story it goes like this. Baby Jane and Blanche Hudson are sisters. Baby Jane is a child star who gets quickly forgotten by her public once she grows up. Meanwhile Blanche becomes a famous Hollywood star. At the height of her career Blanche is crippled in a mysterious car accident. Naturally everyone blames her drunken, jealous sister. Now edging towards old-age the sisters live together in Blanche's Hollywood mansion where Baby Jane acts as caretaker for her invalid sister. When Baby Jane discovers that Blanche plans on selling the house and having her committed to a home she loses the last remnants of her shattered psyche and begins to torture her sister and slowly starve her to death. Blanche's bedroom becomes her prison cell. The unforgettable climax of the movie, at the seashore, reveals what really happened the night of the car accident.

Footage from both Bette Davis' and Joan Crawford's early movies are shown. For Crawford it is used to demonstrate Blanche's talent and popularity. For Davis, however, the opposite is true. Some of her weakest scenes from her worst movies are used to show what a flop Baby Jane was in Hollywood. Davis most likely didn't mind this slight since her's is by far the meatier role. The hardest part for Crawford was physical. She spends a great deal of the movie bound and gagged. Otherwise she mainly has to exude compassion and patience for her evil sister. Davis, meanwhile, gets to chew roomfuls of scenery as the progressively more garish Baby Jane. Her peak moment of insanity (and acting) occurs when she performs the song 'I've Written a Letter to Daddy'. The sight of this deeply disturbed woman, dressed like a little girl, trying so desperately to recapture the innocence and adulation of her childhood is one of the most deeply sad moments in any movie and Bette Davis plays it brilliantly. For it she would receive her tenth and final Best Actress Academy Award nomination. The following campy, classic bit of dialogue sums up both roles perfectly. 'You wouldn't be able to do these awful things to me if I weren't still in this chair.' 'But cha AAH, Blanche, ya AAH in that chair.'

In the movie trivia department the actress Anna Lee has a supporting role as the Hudson's nosy, star-struck neighbor. She would go on to star in daytime television's General Hospital for many years and passed away just a few weeks ago at the age of ninety-one. Also the man who sells the ice cream to Baby Jane at the end of the movie is played by Ernest Anderson. Twenty years earlier he played Parry Clay, the young man Bette Davis blames her hit-and-run homicide on in In This Our Life.

Although this movie has its share of violence, cruelty and abuse, underneath the horror-movie facade it is really about family relationships. The connection between Baby Jane and Blanche is psychologically and emotionally complex. In a sense they have created each other. At the end of this movie ask yourself who the true villian is. 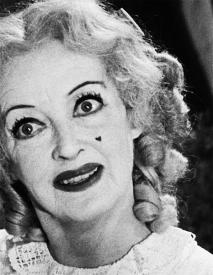 What Ever Happened to Baby Jane is Sunset Blvd by way of Shirley Temple, as visualized by Stephen King. Actually it is based on a novel written by German author Lukas Heller. Like Norma Desmond, Blanche and her sister Jane live on the fame they each used to know. Jane's fame was as a curly haired musical child star and Blanche was a movie starlet. Jane's fame ended before Blanche's and she resents her sister for it with all of her soul.

Jane is nuts, beyond salvation. She has always been off but the film implies that she is put over the edge when a television station plays some of Blanche's films. It serves to remind Jane that Blanche was the bigger star and her ego cannot cope with that knowledge. Her anger towards her sister multiplies as the film progresses.

Patrick wrote that it is sad when an adult Blanche dresses like a little girl and sings 'I've Written a Letter to Daddy'. I found that scene to be seriously frightening. Clearly this marks her view of the world to be so skewed that she is dangerously insane.  She looks like some deranged clown that murders little girls and dresses their corpses in clothes that she wore as a child star.

It is Bette Davis that makes this film work. Crawford merely has to look frightened and desperate. Davis plays it over-the-top. Her performance makes Gloria Swanson's performance as Norma Desmond seem subtle.  With Norma we saw a window of opportunity for her sanity to come to a new understanding. With Jane there is no going back.  Her head has more loose screws than my tool box.

The opening scene and confession on the beach are vague about how it actually played out. Also, the ending is left open ended as to what happened to Blanche. I hate a mystery that is never completely explained.

There is some campy fun to be had here but I did not enjoy this "B" film with two former "A" listers as much as Patrick. 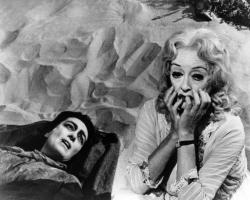 Joan Crawford and Bette Davis in Whatever Happened to Baby Jane.

And I enjoyed it even less than Eric. The only way I've ever been able to enjoy this movie is as a comedy. The melodrama is far too over the top for my tastes and instead of feeling sad, or frightened by Baby Jane, I've always found her unintentionally hilarious and quite grotesque.

Davis does indeed steal the show from Crawford by playing to the rafters and hamming it up the way only an old pro such as herself was able. She's helped by the extra layers of makeup that have been applied to her weathered face by a trowel and the childlike dresses she wears. Crawford underplays and her Blanche is unrealistically passive. Despite the guilt Blanche feels, she is still far too forgiving of Jane's behavior when the film begins. She behaves so meekly and her incessant buzzing is so annoying that at times it's actually difficult to work up much sympathy for her.

Some of the humor in the film is helped by poor editing. Jane leaves the house in several scenes and while she's gone time seems to move at a different speed for her than it does for Blanche at home. Jane is able to drive (through L.A. traffic, remember) around town performing errands during the time it takes Blanche to drag herself down some stairs (Why the hell does the woman in a wheelchair have her bedroom on the second floor anyway?). Later, Jane is able to drive to the bank and back, seemingly in the same amount of time that it takes the maid to raise a hammer in the air. These are supposed to be moments of great tension, but I found them more funny than suspenseful.

According to most accounts, Crawford and Davis didn't like each other much and stories and legends abound around the making of this film. One of the most repeated stories is that when Davis received an Oscar nomination, but Crawford did not, Crawford told the other nominees that should any of them be unable to accept their award, she would happily do it for them. And sure enough, come Oscar night, when winner Anne Bancroft was unable to pick up her award, Crawford ended up on the stage in her place. Davis would later write in her memoir, "That year, each nominee sat in a separate dressing room backstage, equipped with a TV monitor...When Anne Bancroft's name was announced, I am sure I turned white. Moments later, Crawford floated down the hall, past my door. I will never forget the look she gave me. It was triumphant. The look clearly said, you didn't win and I am elated!."

Eric compared this movie to Sunset Boulevard and it does share some similarities with that far superior film. The ending and Jane's fate are particularly reminiscent of Norma Desmond, with both of them finally getting back the audiences they've so longed for.

This is definitely a camp classic and if that type of film is to your tastes you probably won't find one finer. It's just not my particular cup of tea. 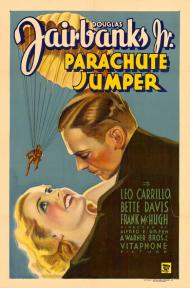