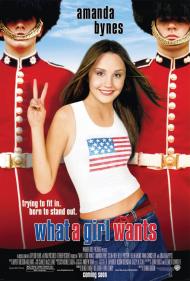 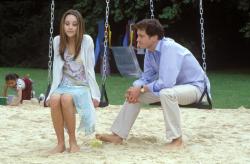 Amanda Bynes and Colin Firth in What a Girl Wants.

While every movie has a target audience that it is geared towards, the truly great movies transcend that audience and appeal to a much broader one.  What a Girl Wants is not one of those movies.  It is aiming for the readers of Teen-People Magazine and it successfully hits its target to the exclusion of everyone else.  While I did find the movie amusing enough in parts, only someone who has never been to the movies before will be surprised by anything that happens in this one.

Daphne Reynolds (Amanda Bynes) is an All-American girl living in New York City with her bohemian musician mother Libby (Kelly Preston).  All Daphne knows about her father is from the story her mother tells her every year on her birthday.  Apparently her Father is an English Lord (Colin Firth) who met Daphne's mother in Morocco.  They were married in a Bedouin wedding ceremony.  Upon their arrival in England Lord Dashwood's choice of a free-spirited American bride is met with displeasure by his family and political advisors and the bride is sent packing back to the states.  Only after she is gone, does Libby realize that she is pregnant.

When the story of her parent's meeting is told for the first time, it is so lushly romanticized that I assumed that the truth would turn out to be the exact opposite.  I thought the truth would reveal that Libby's relationship with Lord Dashwood was just a quick fling and that the story was only a way for Libby to make Daphne feel good.  Sadly, the story is 100% true, and sets the tone for the rest of the picture.

On her eighteenth birthday, Daphne, after seeing one more father-daughter dance than she can take, flies off to England to meet the Father she's never known.  At her hotel in London, she meets a young, cute, musician/desk clerk, (who really comes from a rich family, but who's parents gave it all up for love) and before you can say, "Hands across the Pond", young love has blossomed.

Daphne's arrival at her Father's estate causes a stir, not only because he never knew that he was a father, but also because he is currently running for office and doesn't want a scandal so near the election.  The stir is aggravated by Lord Dashwood's social climbing fiancée and her likeminded daughter, who want nothing to do with the crass American girl.  Naturally Lord Dashwood's mother, Daphne's grandmother, (played by Julie Andre...I mean Eileen Atkins) takes an immediate shine to the girl, inviting her to stay with them.

Thankfully the cast is all capable and charming, making up partly for the predictability of the plot.  Colin Firth plays the stock stiff-upper lip Englishmen that he perfected in Bridget Jones' Diary and Eileen Atkins puts her many years of Masterpiece Theater acting to good use as the crusty Countess.  Amanda Bynes is cute, but a little cloyingly so.

Soon Daphne is mixing with her Father's peers.  The British Upper-class, whom it seems have never met an American before or been told to 'loosen up', are soon falling under her spell.  That is until her behavior begins to affect her stodgy father's standing in the polls.  When she is told to behave more like a proper Lady, Daphne is faced with either being true to herself or possibly losing the Father she has finally been re-united with.  (Damn it, I promised myself that I wouldn't cry while writing this review!)

The rest is all too predictable. 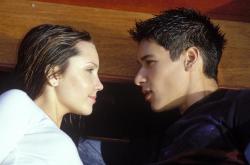 Amanda Bynes and Oliver James in What a Girl Wants.

As Scott said What a girl Wants is a sugary ball of fluff aimed at twelve year old girls with princess fantasies, as vapid in content as it is innocuous in spirit, but oh so pretty to look at. Every gag is so obviously set up that all you can do is sit back and let them wash over you. In one party scene a character goes on and on about his beautiful crystal chandelier. Hmm. I wonder if it will come crashing down at the end of the scene? Later Ian is teaching Daphne poise by having her balance on the seat of a rowboat. Hmm. I wonder if someone's going to fall in? At the end of the movie Daphne is, sadly, back in New York at yet another wedding reception where her mom is performing. The moment arrives for the father/daughter dance. Hmm. Will Lord Dashwood (with boyfriend Ian in tow) turn up in time to dance with his daughter?

Amanda Bynes has charisma and screen presence. She exhibits a wide-eyed innocence with a slightly perky demeanor. Still, she is more of a personality than an actress. In all fairness this isn't a role that calls for anything other than those two qualities.

Everything about the movie is designed to take you into a fairytale experience. Diabetics be forewarned, What a Girl Wants is so saccharin sweet that it makes Pretty Woman seem cutting edge and adult by comparison. At the same time if you enjoy this sort of no-brainer, pretty on the eyes, soft-focus, swelling music movie experience, then get ready for a cinematic treat. 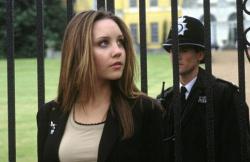 Amanda Bynes in What a Girl Wants.

This movie is as completely predictable and sugary sweet as both Scott and Patrick have said. It also is the most unoriginal script I have ever seen. It steals heavily from better Disney movies like Cinderella, The Parent Trap, and The Princess Diaries.

I liked one character, the grandmother (Eileen Atkins). Her skeet shooting scene and few lines of dialogue are the rare bright spots in this movie. One of her first lines is the best; "No hugs." She informs her affectionate granddaughter. "I'm British. We only show affection to dogs and horses."

Like Patrick, I think Amanda Bynes is by no means an actress. She does slapstick just fine on her Nickelodeon show. However, she is not convincing in this light comedy/drama and thus the audience is never drawn in to actually take any of this fluff even remotely serious.