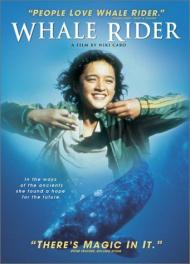 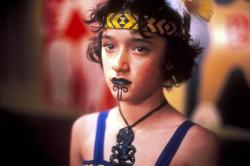 Whale Rider is a magical fable that will bring a tear to your eye and uplift your spirit. It is also a beautifully wrought coming of age story full of heart, humor and strange and wonderful song.

It tells the story of a young girl and her relationship with her native New Zealand family, in particular her grandfather. He is a chief and the religious leader of their tribe. He also teaches the adolescent boy islanders in the sacred, traditional ways of the warrior. He is also a sad man with a sad granddaughter. You see when she was born her mother and twin brother died. For him this was far more than a personal tragedy because it broke the line of males in their family which had stretched back to the beginning of their people's oral history. Back to their religion's holy figure; he discovered their island on the back of a whale, leading their people who followed in canoes. And like with most religions the grandfather had been waiting for the next messiah to be born. Despite all this the grandfather loved his granddaughter, but he felt that she was cursed and by her very existence had brought a curse upon them all. Whenever anything bad happened to them the grandfather assumed it was because of his cursed granddaughter. Therefore, the heart and soul of Whale Rider is the character of the little girl. She is such a beautiful spirit. Everyone in the family sees this except the grandfather. They constantly butt heads over the fact that she wants to learn the ancient, sacred warrior ways, but is forbidden because of her gender.

The climax of the movie, and the scene that could win this talented young actress the Academy Award, begins at a school ceremony. After a particularly harsh disagreement with her grandfather, the young girl has invited him as her special guest of honor to watch her perform in a traditional recital. When she sees that her grandfather is not in the audience she begins to cry, but holds herself together enough to go on with her lines while the tears stream down her face. Later that night a group of whales is found beached on the shore. In a mystical and amazing way this provides the catalyst for the spiritual and emotional healing between granddaughter and grandfather.

Nearly all of the performances in Whale Rider are outstanding. Keisha Castle-Hughes is a rare jewel as the rejected but strong-willed Pai. Rawiri Paratene is perfect in the difficult role of the grandfather, having to convey his complete disapproval of his grandaughter and his underlying love for her at the same time. The grandmother and the uncle are also worthy of mention. They provide moments of levity that keep the movie from becoming too heavy at times. They are both wonderfully realized characters.

The sonorous chanting of the native islanders plays an important part in the story and it is truly a thing of beauty. The way they stretch out a note, weaving it up and down and causing it to vibrate, is a wonder.

Whale Rider should be seen by everyone, but especially by grandfathers with their granddaughters. 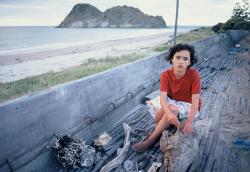 "Magical fable?" Watch this movie sober Patrick. Whale Rider is nothing more than an after school special set in an exotic locale. A young girl, in a completely dysfunctional family, proves she can be just as good or better than a boy. Woohoo!

The plot is as predictable as a Brady Bunch episode. You can see every scene coming before it happens. I bet she practices with the stick. Yep, there she goes. Gee, I wonder how long its going to take grandpa to find out? Wow, that didn't take long. None of the boys were able to retrieve the whale's tooth that gramps threw in the ocean to test them. Do you think the girl might end up finding it? That's a tough one to call. I wondered how much longer I had to sit through this movie before I got to see her ride on a whale?

Yeah, yeah, the chick does a good job acting. But how can I really feel sorry for her when I know that within a half hour of screen time grandpa will come around and except her. With such a foreign setting and a unique culture I expected some originality.