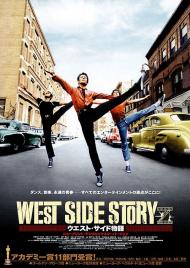 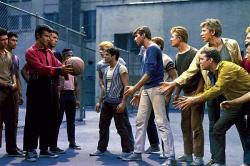 Sharks versus Jets in West Side Story.

West Side Story updates the Romeo and Juliet myth. Set in New York City in the late nineteen-fifties, it features some of the most famous songs and dances ever to be featured on the silver screen. Instead of feuding families named Montague and Capulet we have rival inner-city gangs, the Anglo Jets and the Puerto Rican Sharks. Tony, ex-member of the Jets, meets Maria, younger sister to Bernardo, the leader of the Sharks, at a dance and they fall instantly and hopelessly in love. Tony sings blissfully on his way home that night, "Maria, Maria, I've just met a girl named Maria". But, alas, these two soul mates are surrounded by ignorance and hate.

In this movie people break into song or start dancing all the time. The songs are unforgettable. There's the snappy, "When you're a Jet you're a Jet all the way, from your first cigarette to your last dying day" or the whimsical, "Could be, who knows? It's only just out of reach, down the block, on a beach, maybe tonight" or the energetic, "I want to live in America" or the melodic, "Tonight, tonight" or the lilting, "I feel pretty, oh so pretty" and of course the anthem like, "Hold my hand and we're halfway there, hold my hand and I'll take you there, Somehoooow, Somedaaaaaay, Somewheeeeeeeeeeeeeeeeeeeerrrrre".

Music by Leonard Bernstein, lyrics by Stephen Sondheim, quite possibly the best score ever written for a musical, movie or stage show.

The story and acting are nearly as memorable as the music, but not quite. The dancing is so graceful, energetic and unique that it thrills from the first number and doesn't let up. West Side Story is part Opera, part Ballet and 100% entertainment. Natalie Wood, with dubbed in singing by Marni Nixon, does a passable job at a Puerto Rican accent. Richard Beymer is boyishly handsome and does a great job lip-syncing the lyrics to the many songs his character gets to sing. The great Rita Moreno recreates the role she made famous on Broadway, that of Anita, Bernardo's girl and does her own singing, which most definitely helped her win the Supporting Actress Oscar. George Chakiris as Bernardo and Russ Tamblyn as Riff give good supporting roles as well.

Besides the music, the tragic ending of West Side Story still holds up well after more than forty years. I won't spoil it for those who have never seen this spellbinding movie but the way that it is shot is absolutely gripping. Tony, in tears, running through the neighborhood, pleading at the top of his voice... "Come and get me too Chino!" still packs a wallop. 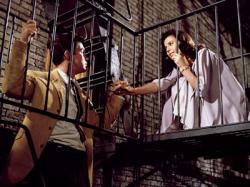 Richard Beymer and Natalie Wood in West Side Story.

The movie version of West Side Story stinks due mainly to the cast. I have seen only small time productions of the stage play. I would take any of them over this movie.

Patrick seems nonplussed by the fact that the two leads do not sing their own songs. I think that Natalie Wood and Richard Beymer were completely miscast. This movie contains some of the best songs ever written. Why cast two such nonsingers in the lead roles?

The producers could have held auditions and found an actual Puerto Rican girl, who can sing, to play the role of Maria. Wood does a good enough job acting the role. She fairs better than Beymer. Her scream of 'Don't you touch him!' Is the emotional climax of the movie.

They also could have found someone a lot more masculine to play the role of the tough former gang leader Tony. He is supposed to have this rep from his street gang, but Beymer is such a soft, baby-faced actor that no matter how hard you look, he just does not have it.

Some of the movie was shot on location. However it is obvious when scenes were shot on a stage. This is the movie version people. It should have been filmed entirely on location. Stage, film, stage, film, get it. They are are not the same thing and the production should have taken every advantage of that fact.

What you have left is all of those great songs. That is the one area that this film masters wonderfully. Granted, too many are performed on a stage. Still the emotions and moods of the songs are carried so incredibly that you may easily find yourself lost in this movie. My personal favorite is 'One Hand, One Heart'. Listening to the soundtrack cd however, is as good as watching this movie. 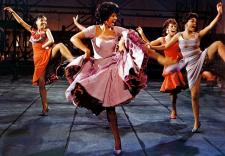 Rita Moreno dances it up in America.

Richard Beymer is fucking awful as Tony. The fact that the movie still has an emotional impact is in spite of him instead of because of him. Yes, I agree that it would have been nice if they'd cast a Puerto Rican in the part of Maria, but Wood does a good enough job despite that and it's not as if the rest of the Sharks are played by Puerto Ricans either. The actor who plays Bernardo is Greek and had previously played the part of Riff on the London Stage. Despite the differences of ethnicity, the rest of the cast is great, but good god Beymer has no redeeming features whatsoever!

Tony is supposed to be this legendary Jet. Riff's best friend and former gang leader. He should be tough and cool, but instead he's a pansy-ass who can't sing, dance or act, which kind of puts him at a disadvantage seeing as this is a musical. Interestingly it's been reported that Elvis Presley was offered the part of Tony, but that he turned it down on the advice of his manager, Colonel Parker.

My two favorite musical numbers are "America" and "Gee, Officer Krupke" both of which highlight the differences between the two gangs and both of which contain some comic relief from the heavy drama to come at the conclusion of the movie, while also containing deeper meanings and both are actually saying something. Rita Moreno shines during "America", as she does in every scene in which she appears.

Ultimately, the songs, the dancing and the compelling story mostly make up for Beymer's miscasting. Even with him in the part of Tony, the ending is still very emotional and well done. It's just a shame they couldn't have found someone (anyone) else to play his part.