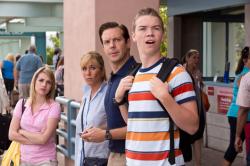 Emma Roberts, Jennifer Aniston, Jason Sudeikis and Will Poulter as the Millers.

We’re the Millers has an old fashioned set up with a mature twist. Like so much American humor it is a situational comedy where characters continually find themselves in awkward positions and or places. The twist comes in the fact that the lead character is in fact a criminal.

David is a middle aged low level drug dealer. He has been making a living at it since he was in college. He has plenty of customers but hardly any friends. He is attracted to his stripper neighbor, Rose, but she has no interest in him. Another neighbor, Kenny, a teen age boy whose single mom went out for a drink two weeks ago and never came back, looks up to David who has little patience for him. One day Kenny gets David into trouble when he tries to save a young lady runaway named Casey from some muggers. They end up robbing David of his stash of marijuana as well as all of his cash he owes to a much bigger dealer, Brad.

To pay Brad back for the lost drugs and money, David agrees to smuggle, “a smidge” of weed into the United States from Mexico. His plan is to pose as a family so as to appear so innocent that no guard would think to search them at customs. He recruits Rose to be his wife and Kenny and Casey to be their children. They board an RV and make like the Millers, your average American family on vacation.

Of course nothing goes as planned. It starts with the fact that they mostly do not get along, at first. They then have to deal with the drug suppliers who get a tad upset when the Millers take someone else’s drugs. There is the other family traveling by RV that wants to get up close and highly personal with David and Rose. Then there is the spider that bites Kenny on his testicle, in one of the funniest scenes in the film.

Will Poulter as Kenny is a real treat as a teenage boy at the awkward stage of being as tall as a man but as innocent as a child. He is the most likable character on screen. He falls in love and is the first to admit that he truly needs the others in his life. Filming one scene must have made Poulter’s day, or year. It required him to kiss Roberts and Aniston over and over again.

Although this film is about illegal drug deals and smuggling, the heart of the film is about four loners coming together and forming a family. Almost immediately after they are first together they begin to argue. David thinks they are going to blow their cover, when in fact the arguing makes them seem all the more like a real family. Yes, it gets a bit gooey sweet, but it all comes together nicely with a message of how we all need someone to care about and care for us.

It is intended for us to like and want to see this “family” come together and succeed but that requires that we also kind of root for a large supply of drugs to make it into our country. Had this film been made before the new millennium, I bet they would have changed the character of David from the actual drug dealer to the brother or friend of the drug dealer who he has to save by doing the smuggling. In today’s world where marijuana is practically legal, we are not supposed to see David’s drug dealing as such a bad thing. Sure the film mentions several times that what is happening is illegal but we are never set up to do anything but like David and his manufactured family of drug smugglers.

That is where this film succeeds. All four leads are playing very likable caricatures. David is a drug dealer who is just too stubborn to admit he wants a friend. Rose is a stripper with morals who is tired of getting the fuzzy end of the lollipop. Although we never hear why, Casey is a runaway who puts up a brave front, but really just needs parents to look out for her. Kenny is also in need of guidance and is not in the least shy about showing it. Although the plot of drug smuggling, graphic sex talk and full frontal male nudity, if you count Kenny’s swollen testicle, make this a rated “R” film, at its heart is the very definition of family. 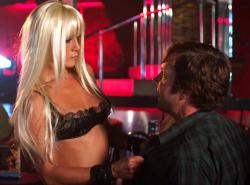 Jennifer Aniston and Jason Sudeikis in We're the Millers.

We're the MIllers is one of the most purely enjoyable movies of 2013. As Eric wrote, it's basically a family comedy with some mature plot points, including drug deals and strippers. Despite those clash of genres, the film, espcially its resolution, is essentially wholesome.

I agree with Eric that the film's success rests largely on the shoulders of its four leads. The actors are all likable, if safe choices. Jennifer Aniston looks hot for her age (or any age), but I can't imagine any real 44 year old stripper looking like her. Likewise, Emma Roberts makes a wholesome "street punk", while Jason Sudeikis plays a drug dealer you could introduce to the whole family. The original choice to play Sudeikis's character was Steve Buscemi, which makes you wonder if his character wasn't meant to have a little more edge.

I also agree with Eric that Will Poulter is a scene stealer as Kenny. His rapping of TLC's 'Waterfalls' was the highlight of the trailer and he doesn't disappoint in the film itself. His spider bite and budding romance generates some of the film's best scenes.

Aniston's film career has never really taken off, despite some big movies, but perhaps she's finally stumbled upon a way to capitalize on her persona. This movie and 2011's Horrible Bosses (also starring Sudeikis) play against the girl next door image she created for so many years on TV's Friends. This is definitely one of the best movies of her career.

Sure, this movie isn't going to win any awards, but it will leave the audience feeling good and sometimes that's enough. 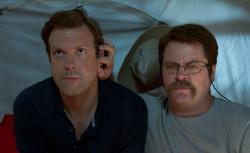 Jason Sudeikis and Nick Offerman in We're the Millers.

As for the drug-smuggling angle, it's true that laws regarding marijuana have loosened up in recent years but this movie is careful to never once show anyone actually lighting up. It's a far cry from Cheech and Chong. Eric suggested that if this movie had been made before the new millennium that the main character would have been changed to the brother or friend of the drug-dealer. I will suggest that if it had been made back then that it most likely would have featured a scene where the entire Miller “family” gets high together.

Another trend this movie exploits is the use of prosthetic male genitalia posing for the real thing. While women are often required to do actual full frontal nudity, the same is rarely asked of men. Now personally I'm fine with or without the nudity. I don't think it adds much to most movies. But I dislike obvious double standards.

One thing this movie demonstrates is just how much hairstyles and clothes affect the way we see people. Jennifer Aniston looks at least 10 years older and 5 lbs heavier in her sensible “mom” outfit. The scene where she “strips” for the drug dealers is quite funny and I'm sure she had a blast filming it.

I'll join the chorus praising Will Poulter's performance as Kenny. His youthful innocence and open-book of a heart provides the emotional center around which David, Rose and Casey revolve. Nick Offerman and Kathryn Hahn are both hilarious in supporting roles as the Fitzgeralds, and Mark L. Young has a couple of funny scenes as the clueless Scotty P. “You know what I'm saying?”

The biggest weakness is the formulaic script and predictable situations the Millers find themselves in. But all's well that ends well and it's a given that these four outcasts will find happiness together by the time the credits roll. The bloopers shown during the end credits are worth checking out too.