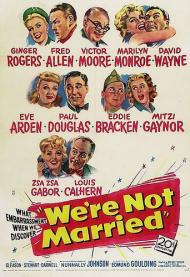 Although it is easy to dismiss We're Not Married! as merely a historical foot note in Marilyn Monroe's career, it is also worth noting that her story line is the funniest in the film.  Unfortunately it also seems like one of the shortest.

It opens with Ginger Rogers and Fred Allen arriving at a Justice of the Peace's home on Christmas Eve to get married.  At first it seems a bit romantic, but it quickly becomes obvious that this marriage is not based on a passionate decision.  It turns out that Rogers and Allen were offered a job doing a profitable morning talk radio program as husband and wife.  It would apparently be unthinkable to have them pretend to be married on air but living a sham marriage is alright.  In fact, they hate each other, but enjoy the large salary the job pays them.

The rest of the story lines get less screen time.  Monroe and Wayne play a young couple with an infant son.  Monroe is a beauty queen participating in Mrs America beauty pageants. Arden and Douglas play a middle aged couple, in which Douglas likes to look back on his wild youth with fondness. Bracken is a soldier about to be shipped overseas, who is married to a pregnant Gaynor.  Gabor plays a gold digger married to the rich older Gleason.

Other than Roger's and Allen's story, most of the segments merely contain a single punchline based on the couple finding out they are not married.   Most are fairly predictable.  The best part being Monroe's and Wayne's as it does not play out as you might expect.

We're Not Married! is filled with recognizable faces.  Some were already veterans of many films.  Victor Moore made his film debut in 1915, while Jane Darwells' was in 1913.   Others would shortly become famous, such as Gabor, Gaynor and Lee Marvin, in a small role as Bracken's army buddy.   Monroe had yet to go platinum blonde but she is playing a sex symbol, getting whistled at while competing in beauty contests.  Gleason says this prophetic line to Wayne, "She's going to be one of the most famous women in the United States."

There are a few laughs to be found here.  One of the best being Roger's and Allen's radio show which is really nothing more than a bunch of thinly disguised commercials.  If you are at all a film buff of old movies you will enjoy identifying all the actors and actresses.  Half of which would appear in another film with Monroe.