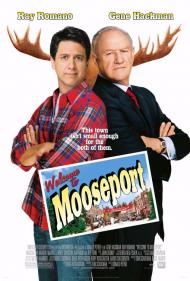 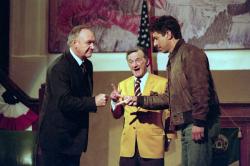 Gene Hackman and Ray Romano in Welcome to Mooseport.

For a movie to work you have to be able to buy into the plot. There's always a certain amount of suspension of disbelief involved in watching any movie, no matter how realistic it tries to be, but so long as you are able to comfortably accept the situation presented to you onscreen then the movie has a chance. In the case of Welcome to Mooseport the filmmakers are asking for too much acceptance. The setup is too ridiculous and outrageous without being absurd enough to make up for it. Even the humor, what there is of it, is too tame and sitcom-like to enable you to truly enjoy this movie.

Its premise involves the President of the United States (Gene Hackman) moving to the small town of Mooseport, Maine immediately after leaving office. We are told repeatedly that he was one of the most popular Presidents in recent history with an approval rating of 85%. We are also told that he is inundated with offers to do lecture tours, write his memoirs, sit on corporate boards, and even do commercials in Norway. Instead, and this is the pill that is too hard to swallow, he decides to run for Mayor of Mooseport.

Of course the filmmakers attempt to give a reason for this decision, but it is so transparently thin as to be insulting to the viewer. On his first night in town, at a "Welcome to Town" party, the former President is offered the position of Town Mayor following the untimely demise of the last one. Naturally he refuses, acknowledging that it would be beneath him, but when a local woman (Maura Tierney) tells him that he should run, the President, smitten by her, agrees to take the job. I find it a little worrying that a man, who once had his finger on 'The Button', could be swayed so easily.

Since this is small town America seen through the Hollywood lens, as you might expect, Mooseport is full of hicks and eccentrics, full of goodness and old-fashioned common sense, where everyone is accepted, even the old man who likes to jog naked through town every morning. Apparently every screenwriter in Hollywood is living under the misapprehension that if you don't live in L.A. or New York, then you must be living in Mayberry with Andy, Opie, and Aunt Bea.

If there are laughs to be had and any enjoyment to be found in this movie it is only due to its likable cast. Romano gets a few chuckles with the same style of humor that's served him in his TV show and Hackman is suitably presidential. Some of the best laughs come from the supporting characters like Christine Baranski as the President's ex-wife. The jokes overall though, are just too tame and too few.

Maybe if you were able to accept that an ex-President would run for Mayor of a small town under the circumstances presented in the plot, then you'll be able to enjoy this movie. If not, then like me, you'll find that Mooseport wears out its welcome very quickly. 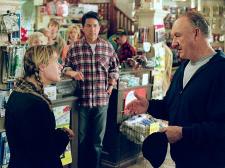 Tierney, Romano and Hackman in Welcome to Mosseport.

Sure, it is not realistic that a former President of the United States would spend millions on a campaign running for Mayor of a small town. For a moment, it reminded me of when Joe the plumber paused Obama's campaign with his common sense question about Obama's pledge to raise taxes on small businesses. Welcome to Mooseport though, is a light hearted movie. It is not intended to be taken seriously. It sets the tone immediately with the naked old guy jogging down main street, and everyone being nonplused by it. It is a cue to the audience of just what kind of movie it intends to be.

I agree with Scott that the supporting cast of characters are all cliched. They do however, provide most of the laughs. The old lady working with Handy was one of my favorites. When Handy is having a conversation with the former President, she tells Handy to, "Call him a horn dog!" They should have milked the supporting characters for more laughs. The secret service agents have a couple of great moments. One is when the former President jokingly tells them to breaks the legs of his assistant.

The problem I had was with the lead characters. Sally and Handy have been dating for years. Sally wants to get married. Even though Handy is your stereotypical family man, he keeps putting of getting engaged. The movie never says why. Handy owns his own hardware store but still acts as the towns handyman. As the boss, why would he not delegate someone else to fix the toilets? Sally likewise is a contradiction. She is a helicopter flying veterinarian. This woman with so much courage and brains is too scared to ask her boyfriend if he wants to get married.

Welcome to Mooseport is harmless family fun. As Scott wrote, Romano does his usual likable schtick. Hackman has some decent moments when he keeps trying to out do Bill Clinton. This is not deep stuff. It is intended as fluff and never attempts to be anything but. It does what it sets out to do, and for that I give it credit.