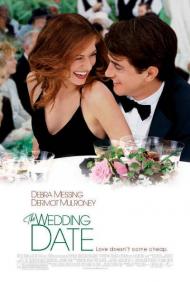 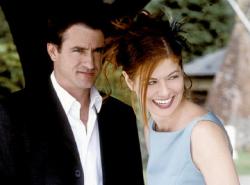 Dermot Mulroney and Debra Messing in The Wedding Date.

The plot of this movie in which a redheaded actress goes to a wedding as a bridesmaid with a phony date and is really in love with a member of the wedding party, and stars Dermot Mulroney, might sound a little familiar to you. If it does then you've probably seen 1997's My Best Friend's Wedding. And even though this movie isn't an exact replica of that one, it definitely has an air of having seen it all before only done better feeling about it.

Debra Messing, of Will & Grace fame, stars as Kat, and given the sitcom level of jokes here, I'm sure her long run on that show helped her feel right at home. Mulroney, who played the groom in that earlier film, plays the male escort Kat hires to accompany her to her sister's wedding. It seems that Kat's ex-fiancée is the best man and she's still in love with him, even though he dumped her. Thus added to the shades of My Best Friend's Wedding, we have echoes of Pretty Woman. There's no cliché from any romantic comedy of the past twenty years that this movie isn't afraid to borrow, water down, and then recycle.

One of the weakest plot points in the film is also its central premise. Kat hires a male escort but then acts as if he were forced upon her. While staying at her parent's house for the wedding Kat is forced to share a bed with Mulroney. She prepares for the night as if she were a sixteen year old virgin rather than a thirty-something grown woman, by piling pillows and blankets in between them, apparently lest their bodies should accidentally brush against each other. The sight of him through a shower curtain and the view of his naked body is enough to send her into flights of panic. I'm sorry, isn't this the grown woman who hired this guy? The woman who was in a relationship with a man for seven years prior to this? Why is she suddenly acting like Jennifer Garner in 13 Going on 30?

As for the inevitable romance, no reason is given to explain why these two people fall in love. Mulroney, who must have been hired by dozens of desperate women before Kat, has sex with her once and then apparently wakes up, deeply in love. Kat, who, like all women in these movies, can't be happy without a man, is so desperate that I guess it's not surprising that she falls in love with a male prostitute, but maybe it's not her heart talking to her, but her biological clock.

Oh sure, there are a few lighthearted moments and some laughs to be had in amongst the clichés, but nothing to justify spending $10 to see. If you want to see Debra Messing playing a single neurotic New Yorker all you have to do is stay home on Thursday night. 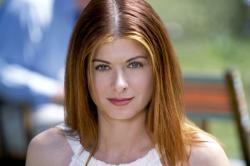 Debra Messing in The Wedding Date.

Although I understand Scott's comparison to My Best Friends Wedding, I saw this movie as a pathetic rip off of Pretty Woman. A woman hires a man whore to pretend to be her boyfriend is a direct lift from Gere hiring Robert's prostitute to be his girlfriend. The big, very big, difference is that Pretty Woman is a good movie and The Wedding Date is a complete mess.

Kat pays Nick $6,000 to convince her family that she is romantically fine and make her ex jealous. Nick's job then is to just smile and fawn over Kat. What he ends up doing, as in Pretty Woman, is being the employer's therapist. Kat nicknames him Yoda because he some how seems wise to her.  He says stuff like,  "The hardest thing is loving someone and then having the courage to let them love you back."  He should work for Hallmark.

I agree with Scott that the romantic angle is also ridiculous.  Nick has another gem of a line, when he says to Kat, "I'd rather fight with you than make love with anyone else."   Women may swoon over that line, but it made me groan.  You need to have a uterus to enjoy this film.

The best line in the entire film is when Nick says,  "Go ahead, Kat, hate me. I think you're running out of steam on this whole Jeffrey thing anyhow."  Nick's side job should be as a movie critic, as that line describes this movie very well.