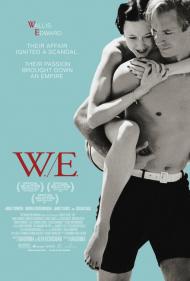 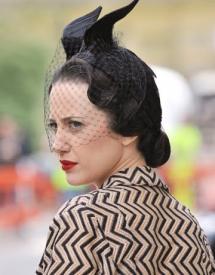 With W.E. writer/director Madonna is so worried about making an artistic movie that she forgot to make an entertaining one. Instead of being merely satisfied with telling the story of King Edward and Wallis Simpson she instead tries to tell two stories. One in 1998 involving Wally Winthrop, a New York woman in an unhappy marriage, who is obsessed with the story of Wallis Simpson. The other is the story of Wallis and Edward. She tries, rather unsuccessfully I must say, to draw parallels between the two, when the story would have been better served by being more straight forward and simply relating the tale of the abdicating king and the love of his life.

The story of Wally is pure soap opera. She wants to have a baby but is unable. Her rich psychiatrist husband is having an affair and can be abusive when drunk. She meets a security guard at Sothebys, where an auction of Wallis and Edward's belongings is taking place, and they strike up a friendship with some mild flirting.  It is the auction that is used as a framework to the flashbacks. Wally picks up a pillbox or touches a cigarette case and then we are shown a scene where Wallis and Edward are using that object.

Several times in the story we are told that everyone mentions what Edward gave up, but no one ever talks about what Wallis gave up. It's the central theme of the story. This is supposed to generate sympathy for Wallis. Madonna though, has been living the life of the ultra-rich and privileged for too long to know how to generate much sympathy for any of her characters. Wally complains about her bad marriage. She says she wants to work but her husband won't let her. Exactly how he's stopping her isn't clear and he's such a cartoon bad husband that there's no reason for her to stay with him. Wallis complains about how hard it is to live the greatest love story of the century and all the things she lost, but she remained rich and privileged her whole life. And let's be honest, her reputation wasn't all that strong or clean to begin with. It was difficult to muster much sympathy or even much of a liking for any of these characters.

We are also offered no real insights into why Edward loved Wallis so much that he was willing to give up the throne for her. He's attracted to her and she takes an interest in his work, but why we should believe their's is the love story of the century is never made clear.

The movie does look good. Wallis was a fashion hound and you can tell that great care was taken to get her look exactly right. The period portions of the film are carefully constructed in their attention to detail. In the scenes in 1998 however, the time period details are less clear and except for the fact that a real life auction of Wallis and Edward's possessions took place then, there is nothing to differentiate those scenes from today.

One of the most infamous details about Wallis and Edward is that they were Nazi sympathizers, something that has been refuted, but is still often spoken of in regards to the couple. It is only mentioned briefly in the film and is dismissed by Wally but with nothing to back up her repudiation. If it were Madonna's purpose to remove this taint from the couple then perhaps she could have gone into more detail on the subject.

Earlier in the year W.E. was generating some awards buzz, but in the end it only received one Oscar nomination and that was for costume design, which it fully deserved as they are sumptuous. The song "Masterpiece", which won the Golden Globe for Best Original Song, was deemed ineligible for the Academy Awards because it appeared only as the second piece of music during the credits, which seems a bit petty considering there are only two songs nominated without it.

If Madonna wants to move into directing then she should get someone else to write the scripts. She has a fine visual eye, but she seems at a loss on how to put together an entertaining story. 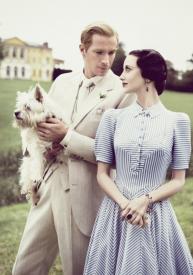 Madonna tries to create some sympathy for Simpson by speaking of her sacrifices. What did she give up? Privacy? A respectable reputation? The one thing I wanted from this film was some insight into what Edward saw in Simpson. The only thing we see is that Simpson is rather comfortable around him. Whereas everyone else walks carefully around him, she seems extremely unfazed by his station. Perhaps it was that Simpson was an American or maybe she was just an obnoxious flirt.

Simpson being so comfortable around Edward leads to the film's best scene. While at a dinner party, Edward, sitting next to Simpson, moves his chair, accidentally tearing the hem of Simpson's dress. Simpson snaps at Edward for doing it. "My God David, look what you've done!" Everyone else at the table reacts in horror. How could a commoner yell at a King unless they were so very very familiar with each other. It gave everyone at the table to pause and one girl, who likes Edward, to storm off.

Another scene of interest comes shortly thereafter where Edward, and Simpson's husband are shown coming to a vague agreement about Edward's relationship with Simpson. I have no idea what her husband knew of the love affair in real life but Madonna implies he was aware of it. Most of the film though, is shallow blather.  " Then I'll give up the throne." "And I would be the most despised woman in the world."

This film belongs solely to the women. We learn nothing about Edward while William is merely a jerk. We are meant to feel sympathy for Wally and Mrs. Simpson but cannot when both are willing participants in their own problems. Wally just needs to live in reality and get out of a marriage that has long become toxic. It is Mrs. Simpson who I found truly impossible to sympathize with. We see her on vacation and given expensive jewelry. Her biggest challenge is to decide what dress to wear to what party. So the papers write about her? She is a married woman fucking the King of England. She made her bed (metaphorically only) and decided to screw a famous man in it.  No matter how hard Madonna tried, I was not able to muster any concern for Wallis Simpson. 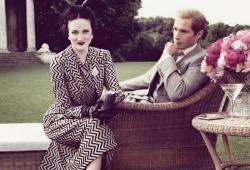 Madonna tries way too hard to prove herself a competent director and the result is an uneven mess. At times she uses many quick cuts and unusual camera angles, then a few seconds later switches to a scene of a couple riding in slow-motion on horseback. The music schizophrenically switches styles, sometimes in the middle of a scene. She over uses obvious cliches like framing Wallis and Ernest Simpson in a mirror for one scene, implying they aren't really seeing each other as they really are but merely as they are reflected. How original!

As the movie goes along she does seem to settle down a little and let the meandering story speak for itself. It's just too bad the script is as banal as her direction is earnest. The modern story angle adds nothing except to the movie's running time. Like my brothers I was hoping for some insight into just what King Edward saw in Wallis Simpson worth giving up his throne and going into exile for. We get none of that.

Madonna also garners lackluster performances from her cast. Their collective energy level seems very low. The women fare slightly better than the men in the cast but then they are the protagonists of their stories. James D'Arcy is wasted as the Duke of Windsor. He simply has to look regal and have fine manners. His passion for Mrs. Simpson is nowhere to be found. Haluk Bilginer, although he has a charismatic look, gives an amateurish performance as the security guard, but this could be the result of overly vague direction as I've seen him act much better in other movies.

The focus stays on the women but, again parroting my brothers, they are shown as victims even though they are both complicit in their own problems. I will say the costumes are gorgeous and the period sets lovely. The nicest thing I can say about Madonna's second feature film as director (following the little seen 2008 comedy Filth and Wisdom), without stretching the truth, is that it isn't completely dreadful. But it comes pretty close.