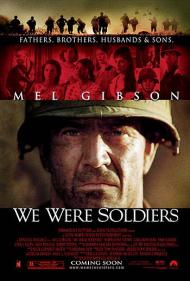 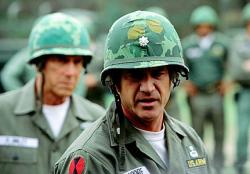 Mel Gibson in We Were Soldiers.

Before the hippie protests and before Jane Fonda betrayed the American soldier, there was the first major battle of the Vietnam war. We went to Vietnam in aid of the French. You know, those guys who have money invested in Iraq and won't support us now. Yeah that's them. The same ones we liberated from Nazi occupation.

Anyway-.. In 1965 U.S soldiers fought the first major battle of The Vietnam war. Four hundred American soldiers entered the Ia Drang Valley and battled 2,000 enemy troops. Leading the troops was Lt Colonel Harold Moore (Mel Gibson) the commander of the 1st Battalion, 7th Cavalry troops, and Joseph Galloway (Barry Pepper) a reporter assigned to cover the story. They both survived the battle and wrote the book for which this movie is based.

This movie is as action filled and gore graphic as you can imagine. Bullets tear out body parts and blood at random. One particular gross scene has Galloway attempt to pick up a burn victim, but the flesh on the man's leg's falls off the bone like meat on an over-cooked chicken.

What this movie offers above most other war movies is that it is a true story and these men are all humanized before they go to war. You meet these people fully aware they are all not going to live. Moore's wife has the duty of receiving all the telegrams of death notices that she in turn delivers to the spouses. A truly hellish job.

Mel Gibson is firmly planted in the second chapter of his career. The first half of his career was spent playing action hero psychos like in Mad Max and Lethal Weapon. Now he seems to enjoy playing fathers. From The Patriot to Signs to this, he definitely has found a nice niche. At this age in his life the wrinkles are showing but they add wisdom to his characters expressions.

Barry Pepper (Saving Private Ryan) does a great job as well. He plays a reporter who comes from a long line of soldiers dating back to the Civil War. However, matters get so tense and desperate during the battle that at one point he has to set down the camera and grab a gun.

The big acting surprise for me was Greg Kinear. I have never thought much of his acting till now. This is the first performance I have seen him in that I like. It probably helps that there is no scene in the movie where he is trying to seduce some chick. The result being that I did not have to look at that insincere grin of his.

A great war movie that shows soldiers as not only heroes, and God worshipping patriots, but as humans. One scene has a dying soldier say the line "I am proud to die for my country." Before any of you liberal wankers groan, let me tell you that there are in fact people who not only completely understand that line but actually said it. I recently read a book called "War Letters." It is filled with actual letters written home from the front. That line and many like it were written in many of those letters.