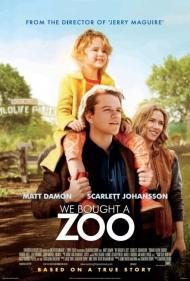 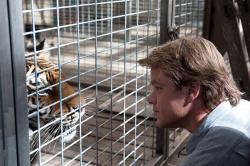 Matt Damon in We Bought a Zoo.

We Bought a Zoo is loosely adapted from a true story about a family who bought a down on its luck animal park. It's a heartwarming family film that might go over-the-top with sentimentality a couple of times, but it's also a movie that will tug at your heart strings while making you laugh. Like seemingly all Cameron Crowe movies, it runs a bit too long, but overall it will leave you with a smile on your face.

Matt Damon plays Benjamin Mee, an adventure writer on a newspaper whose wife has died 6 months prior to the movie's opening. Benjamin's son Dylan isn't handling her death well and has begun acting out in school.  His daughter, Rosie, played by Maggie Elizabeth Jones is one of the most adorable 7 year olds to ever appear on film. Rounding out the family is Thomas Haden Church as Benjamin's brother Duncan who is along mainly to provide some cynical comic relief.

When Dylan is expelled from his school, Benjamin decides he needs to change things up for his family. He decides they need to move and when he finds the perfect home for them in the Southern California countryside he doesn't let a little thing like the fact that it includes a zoo stop him from buying it. Soon he is spending his life savings on repairing the animal park and bringing it up to code so that it can open in time for summer.

Along with the animals, Benjamin is also responsible for the zoo employees, including zookeeper Kelly, played by Scarlett Johansson in as close to girl next door mode as it's possible for her to be. Although there is a chemistry between Kelly and Benjamin, this is not a romantic comedy or a love story. This is a movie about a family restarting their life using the zoo as the means of getting over the loss of their wife and mother.

While dealing with the death of a family member might sound like a depressing story, the ultimate message of the film is one of hope. There are tearjerker elements to the film and several moments that will have the audience reaching for their tissues, but those moments are balanced by the humorous ones and the happy Hollywood ending.

The old saying to never appear with children and animals must have passed Damon by when he elected to play this part. To be fair, the animals, while an important part of the story, aren't overplayed for their cuteness. Thankfully they remain animals and never humans in fur as way too many Hollywood movies tend to portray them. And while Maggie Elizabeth Jones is a scene stealer as little Rosie, it is Damon who holds the movie together, appearing in nearly every scene.

Johansson is quite good as Kelly. She has become such a big and glamorous star that it almost seems strange seeing her in such a small part and playing such a normal character. It's actually quite refreshing.

At more than 2 hours in length, the movie does run long, particularly in the middle. There are a couple of moments where the sentiment turns into sap and could have been trimmed. And the epilogue is a nice little moment, but feels tacked on to an already bloated film.

These minor flaws do little to dampen my enthusiasm for this otherwise enjoyable film. With its near Christmas day release, this family friendly film should be a hit. 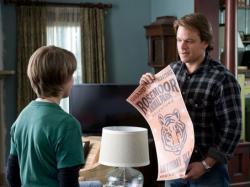 Cameron Crowe did not seem to know where to go with We Bought a Zoo.  It is a story of a man and his relationships with those around him following the death of his wife.  None of the relationships get explored enough to allow us to really feel Benjamin's motives or frustrations.

Ben and Kelly move around each other in a mildly warm romantic way.  Ben and his brother Duncan share some scenes that are not as funny as intended.   Ben's daughter Rosie is played by the cutest child star since Shirley Temple.  Her question of, "What about the Easter Bunny?" was the film's funniest moment.

The relationship spent the most on is between Ben and his teenage son Dylan.  Early on we learn that Dylan has often been in trouble at school since his mother's passing.  Ben also sees, apparently for the first time, that his talented son only draws morbid pictures of death and despair.  Clearly this child needs some serious attention.

Ben use to have a daring job that he loved and found thrilling.  However, talking with his son, seems to scare the shit out of him.  He regularly talks to Rosie and treats her with respect.  He only seems to bark at or ignore Dylan.  Why do people assume a smaller child needs more consoling than an older one?  It is actually the opposite. Smaller children accept change better than a teenager who tries to find reasons and motives for a death or divorce.  Remorse is not part of a small child's comprehension.

Ben also meets an assortment of zoo employees.  A couple have a quirk or issue.  Neither of which really add to the story.  We Bought a Zoo should have focused on just one of the relationships if it intended to be a heart warmer.  If it wanted to go funnier, it should have edited the first 15 minutes and started with the family moving in and did a sort of Mr Blanding Builds his Dream House, only with a zoo.

There are some moments of symbolism like Ben learning to let go of the tiger like he must learn to let go of his malaise over his wife's death.  His twenty seconds of bravery speech that he gives to his son applies to him as well about being brave enough to talk to his son about his mother's death.

Crowe's script and Matt Damon's middle aged waistline present Ben as a real person but we never get inside him.  In one scene we have Damon in the background upset over a bill, while we listen in on the zoo employees commenting on him.  I needed to better understand why he was willing to spend so much money on something so risky.  We do not learn that through other people's eyes.  We needed at least one breakthrough moment where Damon lets go emotionally.  Sure we see him crying over some photos but that is not enough.  As this story is about him relating to others, we needed to see him exchange those feelings with someone else in the cast.

In Crowe's most successful films, Say Anything and Jerry Maguire, he had much better focus and clearer goals.   I am not sure what we are supposed to be rooting for in We Bought a Zoo.  Ben chose to move his family and spend lots of money. If the zoo failed I would be mildly bummed but the unemployed Ben seems to be able to shit silver spoons.  From the moment we meet  Lily we know Dylan will be alright.  Crowe shows us his hand early on and then scatters the deck to add needless length to the story.

Scarlett Johansson gets upstaged by Maggie Elizabeth Jones in We Bought a Zoo.

I was disappointed by this movie. I found it far too sappy and not in a good way. The Best Exotic Marigold Hotel is sappy in a good way. We Bought a Zoo tries way too hard and the script feels forced throughout the story. The epilogue is one of the most embarrassingly sentimental moments I've seen in any movie. It's so disgustingly sweet it should come with a warning label for diabetics.

I didn't like Matt Damon in this role either. And not just because he looks terrible. He seems stiff and uncomfortable in the lighter moments and overplays the dramatic scenes. Scarlett Johansson has likewise never appeared less attractive in a movie than she looks here. I get that the role isn't a glamorous one but she actually looks dumpy.

The kids (and to a lesser extent - the animals) steal the movie away from the adults. Like my brothers I think Maggie Elizabeth Jones is one of the most adorably precocious child actors I've ever seen. Cameron Crowe is known for writing memorable dialogue and her line about the Easter Bunny that Eric mentioned is the most quotable one in the film (along with Benjamin's “20 seconds of bravery” speech).

On paper this looks like a great idea but the execution is somehow off. It is all a bit too by the numbers. The outcome is never in doubt and it takes too long getting there. The scene where all the patrons are lined up behind the fallen tree actually made me laugh. It's the kind of plot device Frank Capra would have used in the 30s, only in today's world it seems contrived. I kept thinking, yeah right they're really going to allow all those customers to climb over that precarious tree to get in to the zoo. That's just begging for a lawsuit.

Sure there are a few decent moments along the way but as a filmmaker Cameron Crowe remains in a slump. It certainly doesn't help that he's made just two movies since 2001. The fewer movies you make the more pressure it puts on each of them to be successful. With We Bought a Zoo he throws everything but the kitchen sink at the audience to elicit an emotional response. It possesses all the pieces of the puzzle but somehow they don't quite fit together.