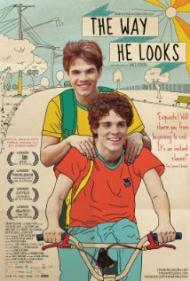 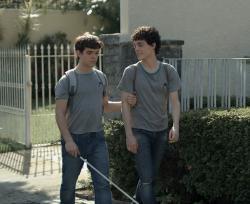 Ghilherme Lobo and Fabio Audi in The Way He Looks

The Way He Looks (Hoje Eu Quero Voltar Sozinho) is a sweetly gentle coming of age tale from Brazil. Like most of the films in the genre, it is filled with clichés and stereotypes. However, it comes from a very real place, emotionally speaking. The teenagers ring true and in one aspect or another you may see yourself in them.

Leonardo is a fifteen year old blind high school student. We first meet him hanging out with his best friend, Giovanna, at her pool. They have known each other their whole short lives and consider the other their best friend. They talk of who will be the first person they will ever kiss. Giovanna walks Leonardo home from her house and school with Leonardo holding onto her arm. In class she sits next to him helping him out with anything visual. There are the typical mean boys who make fun of him, leaving Giovanna his only friend and caretaker, a job she cherishes.

Everything changes when a new boy, Gabriel, comes into their class and sits behind Leonardo. The three quickly become friends, hanging out at Giovanna’s pool and doing school work together. Giovanna tells Leonardo how cute she thinks Gabriel is and wants to kiss him. Giovanna becomes jealous when Gabriel walks Leonardo home after school without her. The mere appearance of exclusion can create drama for a teenager as young people have such raw emotions.

Leonardo fully understands his handicap but he wants very much to break free from the restrictions his blindness creates. His mom is protective, constantly reminding him to keep in touch via his cell phone. He is rarely allowed to be out by himself. When he stays out late, his mother scolds him, “Where were you? Out there in the dark?” Leonardo poetically responds, “It's always dark for me, mom.”

As a father of two grown sons I recognized Leonardo’s actions. He wants freedom but he also still wants his parents' help. I enjoyed the scene where he calls his dad into the bathroom, who comes quickly thinking something has happened to his blind son, only to discover that he wants his father to help him shave.

Things become complicated when Leonardo and Gabriel start to have romantic/sexual feelings for each other but have no idea how to express or even understand them. As a blind person, Gabriel’s looks mean nothing to Leonardo, making his feelings all the more pure. Gabriel discovers unfamiliar feelings for Leonardo in a shower scene where Gabriel’s body reacts to Leonardo’s body double. In another scene, Gabriel sums it all up with, “We have to say the things we feel. We can't keep it inside.”

Physical contact is kept to kissing as this is not that kind of film. This is about the discovering of one's sexuality, not the exploiting of it. At a party, Leonardo gets upset when he thinks Gabriel is there with a girl. Gabriel asks him what is wrong and Leonardo responds, “Because everyone keeps controlling me and no one wants me to kiss anyone, that's why.”

Being a blind gay teenager, Leonardo is a unique character but everyone can relate to his experiences. We have all formed new relationships and redefined old ones. The most important lesson in The Way He Looks is to discover and be comfortable with who you are. The gesture Leonardo makes at the end of the film is simple yet it brilliantly demonstrates his new level of confidence and awareness.

Fabio Audi and Ghilherme Lobo in The Way He Looks.

These teenagers definitely ring true. The emotional growing pains experienced by Leo, Gabriel and Giovana will seem familiar to anyone who's ever attended high school, gotten into disagreements with a best friend, or fallen in love for the first time. The interactions between these three young people never seems the least bit contrived. Ditto the relationship between Leo and his parents. Their family dynamic seems organic and real. Leo has a special relationship with his father. They have a strong bond of trust between them. His relationship with his mother is more complicated and confrontational. Although they clearly love each other, she's over-protective and Leo chomps at the bit in his quest for independence.

Some coming of age movies feature love stories and others do not. The Way He Looks falls in the former category. It features a sweetly romantic budding first love between two teenage boys. It plays out in a true to life manner while ending on a happy and romantic note. The final scene Eric mentioned is perfect. Along with the 1996 British movie Beautiful Thing this is one of the most positive gay adolescent love stories I've ever seen depicted in any film. Why can't Hollywood make this type of movie?

The entire cast is good but Ghilherme Lobo, making his feature film debut, is the standout. He is so good at playing a sightless character that I wasn't sure if he was blind in real life or not (he isn't). His performance is much more than that however. He really gets under Leo's skin and makes you feel as if he's someone you know and care about, not just a character on the screen. As Eric wrote, Leo has a unique perspective being blind and gay but the situations he experiences, and those of Giovana and Gabriel as well, are universal.

When Gabriel enters their lives, Giovana immediately senses the connection between him and Leo. Even if she doesn't guess the full extent of it a part of her understands that things will never be quite the same between her and Leo. The straight girl in love with her gay best friend is a cliché for a reason. It happens often. Daniel Ribeiro, making a remarkable feature film debut as writer/director/producer, is thoughtful enough to give Giovana a happy ending too.

Gabriel is at first awkward around Leo, forgetting to warn him of a step in the sidewalk and making many faux pas in regards to Leo's blindness such as asking him if he's seen a certain internet video or if he wants to watch a lunar eclipse. Soon, though, Gabriel becomes Leo's eyes. He describes the lunar eclipse so that Leo (who has been blind since birth) can understand it. He even takes Leo to his first movie, describing the action on the screen to him until a fellow moviegoer complains about the noise. It's clear to the audience that they're in love long before either of them has come to terms with the idea.

From a social standpoint Gabriel has more to lose by coming out than Leo does. Leo has always been an outcast due to his blindness. He can't really get any lower on the social ladder at his school. Together they make their final gesture. It is touching, romantic and quietly courageous. Just like this movie. Bravo! 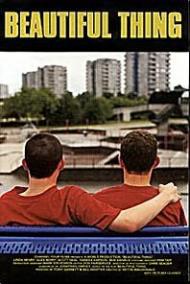