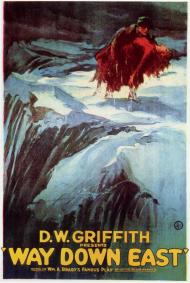 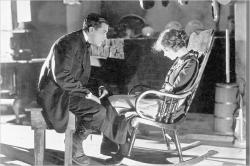 Richard Barthelmess and Lillian Gish in Way Down East.

D.W. Griffith made his five greatest pictures with Lillian Gish as his muse. She starred in The Birth of a Nation (1915), Intolerance (1916), Broken Blossoms (1919), Way Down East (1920) and Orphans of the Storm (1921). While C.B. DeMille was making extravagant escapist entertainment with Gloria Swanson, Griffith and Gish were striving to create ART.

Way Down East is about a young girl from the country. She lives with her ailing mother and they are very poor. The girl goes off to the city to beg for financial assistance from rich relatives that want nothing to do with her. She meets a wealthy man who pretends to fall in love with her, then he stages a fake wedding and takes advantage of her innocence. She gets pregnant and then learns that the wedding was a sham and that she is now an outcast from decent society.

She returns to her mother with the tragic news. Her mother soon dies and the poor girl is left alone in the world with a small baby to raise. Her baby isn't long for this world however. So the girl is once again alone. She meets a religious family that lives on a farm and they take her in, being unaware of her scandalous past of course. The grown son of this family quickly begins to fall for the new girl who seems incredibly sweet and such a hard worker.

Of course her secret comes out eventually and the girl, in the midst of despair and shame, is told to leave by the patriarch. She gets lost in a blizzard and winds up on an ice floe in a river heading for a waterfall. The boy comes to the rescue and his family, overcome with guilt at the way they have behaved, welcomes the girl back into their home with open arms. The movie ends with her wedding to the boy.

Lillian Gish was probably the greatest dramatic actress of the silent era. The scene where her baby dies in her arms is brilliant. The way she realizes that his tiny hands have grown cold, then begins blowing on them and rubbing them. Finally she cannot deny the truth any longer and she collapses in hysterics. Too bad the Oscars weren't around yet because she deserved to win for this one. She even suffered permanent damage to her right hand from trailing it in the icy water for so many hours during the shooting of the climax. Talk about suffering for your art.

As emotionally powerful as this movie is it is not without its flaws. It is a bit longer than it needs to be and there are a few inappropriate attempts at slapstick that seem forced and out of place. Richard Barthelmess is good as the hero. He had such matinee idol looks. But this movie is really a one woman show for Gish.

As a movie director D. W. Griffith was truly a visionary and Way Down East ranks as one of his five greatest pictures.

Lillian Gish suffering for her art in Way Down East.

A bit longer than it needs to be? This overwrought, overly melodramatic, super-sized soap opera, runs two and half hours long, which is about 90 minutes too much. The story is a simple morality play, but it's stretched to epic length with a finale straight out of a Perils of Pauline short.

This is one long tear jerking, soap opera. Over one 15 minute period of the film Gish's character is fooled into believing she's married to a cad and a bounder who takes her virginity and gets her pregnant, is abandoned by the same man, sees her mother die, is forced to give birth to her baby on her own in a boarding house, then watches her baby die in her arms, before finally being forced out of the boarding house without a job, family or any hope for a future. It's no surprise that Gish breaks down and cries, although to be fair, she does do it very well and I agree with Patrick that if the Academy Awards had been around in 1920, surely she would have taken home the big prize.

Part of the problem with the length is the over use of title cards. Griffith seems to forget the old axiom that you're supposed to show, not tell. Too often he uses title cards instead of just relying on his actors. For instance, we're told that Sanderson lusts after Anna in a title card and then we cut to a shot of him staring at her in a lustful way as she climbs the stairs. Did we really need the card too? And as always in silent films, the cards are left up on the screen long enough for even the slowest reader to get through them.

Apart from Gish's acting and the exciting finale, there's not much to recommend about this movie. It's one of the most melodramatic films that I have ever seen. It tries to lighten it up with the slapstick scenes, but as Patrick said, they feel out of place.

Despite how dated it seems now and must even have seemed then, having been based on a play from the 19th century, audiences ate this film up. It would go on to become the fourth most successful silent movie of all time. That might seem hard to believe today, but then what was Titanic, but a soap opera with a climatic finale. 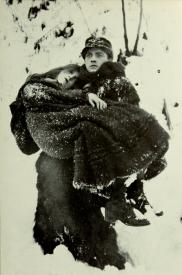 Lillian Gish and Richard Barthelmess in Way Down East

Patrick, writing that Way Down East, "...is a bit longer than it needs to be..." is a huge understatement. D. W. Griffith too often made feature length films that were longer than they ever had to be. The story of Anna Moore could have been told in half the time and, agreeing with Scott, half the title cards.

The plot boils down to a "ladies" man doing Gish wrong and her suffering greatly because of his selfish desires and cruelty. Then she meets the handsome Richard Barthelmess, who falls in love with her and eventually fights the other man and saves Gish. The summer scene by the river, where Barthelmess tells her that he has always loved her is quite romantic, although she is very hesitant about him.

The real treat of Way Down East is the exciting finale. Gish loses her coat and stumbles onto an icy river and collapses. The ice breaks apart and it moves down river, with Gish lying on a section of ice. It eventually heads to a water fall. Barthelmess runs to her rescue jumping from ice floe to ice floe before picking her up and taking her back to shore.

Like so many actors and actresses of the time, the legends of some of their daring scenes have grown. I have had conversations with people who say that Harold Lloyd actually climbed the side of skyscrapers, when really he was never that far off the ground. Gloria Swanson liked to tell the story of the lion she filmed a scene with. Mary Pickford let audiences think she actually filmed scenes with real alligators. How real was the ice floe scene in Way Down East?

According to Lillian Gish, as accounted to biographers, it was pretty damn real. She lived temporarily in a winter cabin waiting for a proper snow storm so Griffith could film the blizzard scenes. When one came she and the crew were outside for hours at a time. She stated that at one point the snow and wind had so frozen and crusted her face that Griffith yelled to the camera man, "... move in! Get that face! That face - get that face!" That close up made it into the film.

As far as the ice floe scenes go, they were filmed on actual chunks of ice on White River Junction, Vermont. Each day of filming began with the river being blown up to loosen the ice or ice chunks being sawed to create the floes for Gish and her rescuer to be on. Gish is shown in close up and at a distance. In the distant shots it is impossible to tell if it is actually Gish on an ice floe in the middle of a frozen moving river. When Barthelmess rescues her we often see him only from the back in a big furry jacket. It could have been anyone in most of those scenes. We are shown several shots of a big waterfall Gish is supposedly approaching, yet when the stars reach the falls we only get a slight view of some water heading over an edge.

How real or manipulated it was is what makes the entire scene so awesome because they were filmed so well. These film makers were doing things that no one would ever think of doing today. Those five to ten minutes of silent celluloid are some of the greatest ever created. It ranks right up there with any stunt Buster Keaton or Harold Lloyd ever put on film. It is just too bad that such an exciting golden movie moment is stuck in such a dreadfully long dramatic film. Those ten minutes are four stars of genius stuck in a two star film.